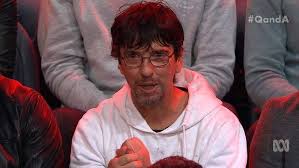 Duncan Storrar is looking at buying a toaster for a shelter with the more than $50,000 raised by a crowdfunding campaign launched after he appeared on Q&A Monday night, its creator said.

Samuel Fawcett is the creator of the GoFundMe campaign "Buy Duncan Storrar a Toaster" and said Mr Storrar was considering buying a toaster or oven for a shelter with some of the money.

On the program, Mr Storrar asked a question about the budget lifting the tax threshold over $80,000, to which panel member Assistant Treasurer and Small Business Minister Kelly O'Dwyer responded, mentioning a $6,000 toaster for a cafe.

Mr Fawcett said Mr Storrar had raised "broad destinations" for the rest of the funds.

"He's wanting to harbour it somewhere so his kids can get covered for uniforms, computers at school and all those kinds of things," Mr Fawcett told 774 ABC Melbourne.

"And he wants to take them on a holiday."

Mr Fawcett said he was getting notifications of donations for Mr Storrar every minute.

"I just wanted to kick Duncan some cash to say 'look, I can offer you enough money for a sandwich and milkshake' that he so desperately wanted," he said.

"I started off with a small donation then I guess people just got behind it.

"It's been quite dramatic and it just boomed.

"He was overwhelmed that so many people cared for him and wanted to give him funds to purchase things."

On Monday, Mr Storrar addressed the Q&A panel: "I've got a disability and a low education, that means I've spent my whole life working for minimum wage. You're going to lift the tax-free threshold for rich people."

"If you lift my tax-free threshold, that changes my life. That means that I get to say to my little girls, 'Daddy's not broke this weekend, we can go to the pictures'.

"Rich people don't even notice their tax-free threshold lift. Why don't I get it? Why do they get it?"

Ms O'Dwyer responded: "We have a company tax cut with small business with a turnover of $2 million and $20 million … it creates more jobs."

"One of the cafe owners I spoke to the other day has got a turnover of just over $2 million. As a result of our change … he will have access to the instant asset write-off, which means he can invest in his business, a $6,000 toaster.

"[It] means he can get more customers through his business on a Saturday, when there's a bottleneck … 'cause toast is that bottleneck he needs to clear in order get more people in."

There was an outpouring of support on social media with tweets including hashtags "#IstandwithDuncan" and "#DuncanforPM".

Mr Fawcett said he was not sure of the tax implications of the donations for Mr Storrar.

Earlier it was reported:

A crowdfunding campaign has raised $25,000 for Duncan Storrar, the unlikely face of Aussie battlers' fight against tax breaks for the rich.

The disabled father of two became the stand-out star of Monday night's ABC Q&A program when he questioned Assistant Treasurer Kelly O'Dwyer about the fairness of raising the tax-free threshold from $80,000 to $87,000.

"If you lift my tax-free threshold, that changes my life," Mr Storrar said.

"That means that I get to say to my little girls, 'Daddy's not broke this weekend. We can go to the pictures'.

"Rich people don't even notice their tax-free threshold lift. Why don't I get it? Why do they get it?"

Ms O'Dwyer fumbled over her response, alluding to trickle-down economics that meant a cafe owner could now buy a $6000 toaster - and presumably do better business and employ more people.

Mr Storrar's story struck a chord with the public, with the #istandwithduncan hashtag trending on social media.

One of his fans, Samuel Slammer Faucet, set up a Gofundme campaign to "buy Duncan Storrar a toaster".

"Duncan seems like a good bloke and every little bit of cash goes a long way," Mr Faucet wrote.

"We reckon he deserves a bit of a helping hand so we've decided to buy him a new toaster.

"Six grand oughtta cover it. And if he has a little bit left over, maybe he can take his kids to the movies or something."

Not everyone was impressed.

One woman claiming to know Mr Storrar said he did not deserve any donations.

"Enjoy a small tax break from me - I am a 20 year old uni student rather than a high income earner but you inspired me," wrote Georgia Grow, who donated $15.

Sean Hogarth gave $10 to the cause and told Duncan he could "buy the kids a couple of choc tops on me".

Some media commentators have been harsh on Mr Storrar, pointing out that he earned so little that he paid no income tax regardless of a threshold.

"He's sucking on the public teet and he has been for years, so what's he complaining about?"