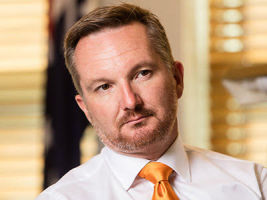 The Opposition has already rejected one of the budget's key tax relief measures, setting up a potential election battle on the definition of a small business.

Currently "small business" refers to businesses with a turnover below $2 million, but the Government wants to expand the definition so tax cuts are available to companies with up to $10 million in annual turnover.

By 2023 Scott Morrison wants all companies, big and small, to enjoy the lower 27.5 per cent rate and three years later he is advocating for a flat 25 per cent tax rate overall.

"We will not support the increase in the threshold, which eventually gets to a billion dollars," Labor's shadow treasurer Chris Bowen said.

"I mean, this is bizarre.

"Malcolm Turnbull claims now that a small business to qualify would have a turnover of less than a billion dollars. We will oppose that."

Mr Morrison described the policy as a 10-year enterprise tax plan that would share the "ambition for smaller businesses to become bigger businesses".

"We will not be able to rely on our natural advantages in resources to secure the jobs of the future like we have in the past," he told Parliament.

"Australia has the seventh-highest company tax rate of the 34 OECD countries and it is much higher than our neighbours in the Asian region."