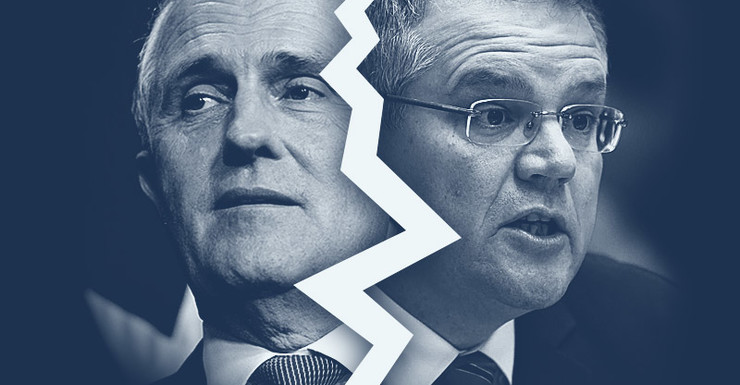 Turnbull and Morrisson From blissful newlyweds to ‘its complicated’

It’s been a while since our nation’s CEO and CFO were experiencing relationship problems, but it’s starting to look like our current Prime Minister and Treasurer have changed their Facebook status to “it’s complicated”.

The discord apparently being played out may soon rival that of Bob Hawke and Paul Keating when PM Hawke pulled the rug out from under his Treasurer over a GST proposal.

I say ‘apparently’ because it’s difficult to judge just how rocky the relationship really is with everyone pointing and yelling about how rocky it looks.

If we stick to the facts, it’s undeniable that since becoming Treasurer, Mr Morrison has publicly set his sights on a number of goals only to have his boss abandon them.

After the Treasurer said he was up for the challenge of selling an increase to the GST, the PM killed the idea. Then Mr Morrison denounced bracket creep as public enemy number one, setting up his proposed modest tax cut for middle- to high-income earners. That was taken off the table too.

Mooted changes to negative gearing tax concessions have likely also been put in the too-hard basket after former PM Tony Abbott led a party room insurgency against the proposal as being a tax “increase” that would undermine the government’s low tax “credentials”.

The Labor Opposition has delighted in each about-face, whether it opposed the policy goal or not, declaring every one a stinging rebuke for Mr Morrison in the hope that even the tiniest sliver of tension can be wedged between the Treasurer and the PM.

That delight burst into unbridled glee when it became clear the Treasurer had been left out of the loop on the final decision to bring forward the budget by a week. Labor pounced.

Mr Morrison may have been involved in most of the lengthy discussions leading up to the decision, as later reported, but he was made to look a goose in public and that never goes down well with a politician.

Even if it was an oversight on Mr Turnbull’s part, Mr Morrison should have been high on the phone call list when the time came so he had some wriggle room in any interviews before the announcement.

Instead Mr Morrison was left to look like an insignificant government cipher who was not to be trusted with the PM’s closest confidence.

As shadow treasury spokesman Chris Bowen said at the time, “if the Prime Minister and Treasurer can’t even work together on something as simple as what day the budget will be held, how can Australians have any faith in what they decide to put in the budget?”

This week, there was ample evidence that neither man had learned from the experience.

The Treasurer was at least across the main points of the “revolutionary” income tax deal that the PM claims to be offering the states and territories so that they can have a secure revenue source from which to fund hospitals and schools.

The potential for variable and therefore competing income tax rates across the jurisdictions was an obvious question that would arise from the proposal, and one for which the PM and Treasurer should have been prepared.

Yet the two managed to completely botch this fundamental point, providing conflicting answers, and inviting further commentary that the PM and his Treasurer remain at odds over tax reform.

This lack of focus is highly risky when paired with the contentious nature of Mr Turnbull’s “competitive federalism” proposal. Community members don’t mind an audacious idea, as long as it is well explained and makes sense. Salesmen squabbling over key details does not make for a relaxed or comfortable voter, however.

Which brings us to the other group that may have an interest in amplifying the tension between the PM and his Treasurer.

According to the newspaper that is usually favoured with exclusives from the Abbott camp, Mr Morrison is back in the good books with Liberal conservatives who were unhappy that the then-Social Services Minister had not rallied his own supporters to vote for Mr Abbott during the leadership coup.

The report claims conservative Liberal MPs across the nation “publicly endorsed Mr Morrison as the country’s best economic manager after revelations he had been excluded from Prime Minister Malcolm Turnbull’s inner circle”.

Two days before that, the Abbott camp’s other favourite media outlet reported the PM had criticised the Treasurer’s handling of the GST at a cabinet dinner in front of the other ministers. “Some” of Mr Morrison’s colleagues reportedly saw this as a “dressing down”.

Nobody other than a cabinet minister could have leaked that information. Was it by a Turnbull supporter who wished to demonstrate the PM had rightfully asserted himself to reign in an overly exuberant Treasurer? Or the Abbott camp to suggest the autocratic, bullying Mr Turnbull of the past had returned?

Given the nature of other anti-Turnbull leaks from cabinet so far, it would be safe to assume the latter.

Consequently, there are two political forces doing their best to whip up the tension that currently exists between the PM and the Treasurer into something that resembles outright antagonism.

Whether they succeed in doing so, or simply manage to create the public perception, both forces are focused on achieving the same goal – the destabilisation and downfall of Malcolm Turnbull or his government.