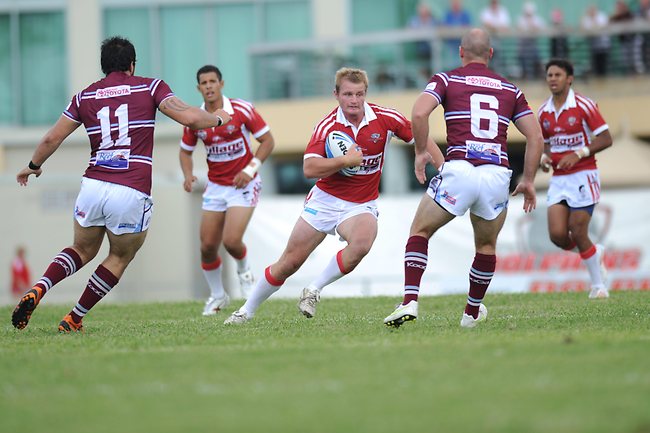 Redcliffe Stumble to Victory in Rugby League over the Cutters

In a game that never promised to be competitive, with the Redcliffe Dolphins towards the top of the table, and the Mackay Cutters firmly on the bottom of the table, the reality proved to be an enthralling contest.

What helped was the fact that the Cutters started perfectly with two quick and early tries to Michael Pearsall and Jack Creath at the 3 6 minute mark, both unconverted. Immediately the Dolphins were on the back foot.

The Cutters’ defence never looked organised and the Dolphins made ground easily, several times going from their 20-metre line to the Cutters’ try line in a set of six. They were rewarded with a try on the 15 minute mark through Zach Strasser to bring Redcliffe back to an 8-4 deficit.

A soft-handed John Asiata slipped Johnny Faletagoa’i a perfect short ball 20m out from the Redcliffe line and found himself steam rolling to the try line to give the Cutters a solid 14-4 lead. John Asiata’s hands were the highlight of the game, despite a more then questionable short kicking game, after being thrust into a five-eighth role throughout the game.

You could be forgiven for thinking the Cutters were getting the upper hand, and their enthusiasm and body language looked to match the scoreline, before a controversial try was awarded to Redcliffe after an obstruction mix up, giving Redcliffe another sniff at 14-8 at the 36 minute mark.

If the Cutters weren’t looking for the sheds then, two minutes later they certainly were when a poor lapse in defence saw Harley Aiono score and hand Redcliffe the lead for the first time 16-14 on the bell of half-time.

While the Cutters must have felt a little disappointed to let their lead slip, the second half proved that there was still some fight. The first 20m of the second half was an arm wrestle. The Cutters defence was still not proving difficult to break, but Redcliffe struggled to put anything together and were their own worst enemy.

While the halves in Darren Nicholls and Zach Strasser and fullback Luke Capewell were clearly top class in their own right, they simply couldn’t put it together frequent enough. In the end, it cost them as the Cutters were the next to score through Liam Taylor in the 62nd minute converting his own for a 20-16 return to the lead.

It was probably the spark Redcliffe needed and saw the middle three finally put it together in some clever set plays that saw Brandon Lee cross in the 65th minute and Aaron Whitchurch in the 71st minute to put the game in doubt for the Cutters at 26-20.

With still nine minutes remaining and down by six, the Cutters really struggled with a level head and leadership without any strong halves and looked mis-directed in the final minutes with the game still within grasp. It could have been a forced move through an injury to Tyson Martin, or a panic reaction from the coaches box, but John Asiata, while a great player, is not exactly the half you would have with the game in reach.

His soft hands and footwork and even long kicking game must be used when possible, but those skills are best applied from Lock, with some direction needed and a short kicking game in the halves.

For Redcliffe, clearly they will have quite a formidable side once they start working together, especially through that middle three of Nicholls, Strasser and Capewell.

In the end, the Cutters couldn’t put it together, and went down 20-26 in front of a boisterous local crowd. It is a long season ahead for the Cutters, with their worst start in their short history at 0-7.