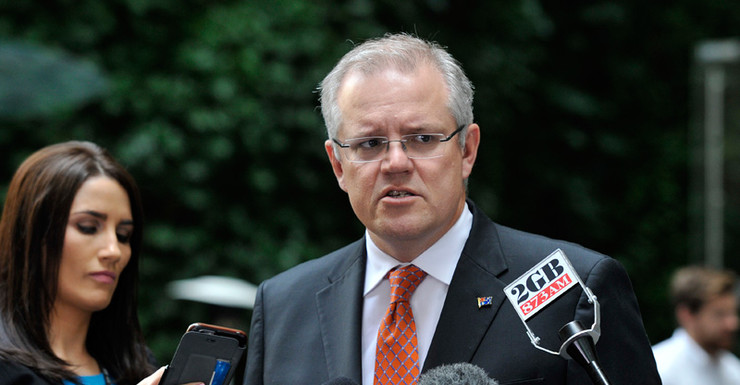 A stronger move on super and some emerging economic joy could help to plug the deficit by 2020.

Leaked government plans to save $16 billion over four years won’t be enough to fill the widening budget gap, figures show.

But a more aggressive move against super benefits by Treasurer Scott Morrison could put the budget into surplus early next decade, according to analysis by respected economists.

The government savings are reportedly to be made mainly through superannuation and multinational tax avoidance measures.

Details are not yet known but they would reportedly total $4 billion a year.

Journalist Paul Murray reported the leak to Sky News on Monday night, citing transcripts of planned government advertisements. Mr Murray told Sky News on Tuesday that the $16 billion figure may not in fact be budget savings, but economic benefits from budget savings.

If the original report of $16 billion budget savings proves correct, a think tank analyst has predicted how the savings would be found.

That would leave a further $1 billion he said could be raised through planned measures including increasing repayments from the HECS higher education funding scheme, measures reducing the cost of generic drugs and increases in tobacco tax.

Mr Daley said governments had been relying on budgets returning to surplus with minimal effort, but a combination of tax cuts and stimulus spending with lower revenues resulting from the end of the mining boom had mitigated against this.

“Governments have been projecting hockey stick charts for increases in revenues but it hasn’t happened. Maybe this time is different and they’ll get lucky, but if not they’ll have to do the hard work.”

The budget is on the slide

As the above charts show, the budget situation has deteriorated in the last year. MYEFO papers released last December predicted significantly wider deficits out to 2018-19 than did the budget last May.

Nicki Hutley, chief economist with research group Urbis, said the $16 billion move was important. “When you are dealing with a $40 billion deficit, raising $4 billion a year is a significant move.”

She said changes to the super system should aim at improving equity. “If you improve equity in the system you also end up getting a better budget outcome.”

Research by the Grattan Institute late last year claims budget savings of $6.2 billion annually could be made by: (i) paring back pre-tax super contributions to $11,000 a year from the current $35,000, (ii) restricting lifetime post-tax contributions to $250,000, and (iii) introducing a 15 per cent tax on earnings in retirement.

The cost to the budget of superannuation concessions is growing dramatically and is likely to rise from $33.5 billion this year to $50.15 billion by 2019, according to the Australian Taxation Office.

Independent economist Stephen Koukoulas told The New Daily the leaked savings plan “would be helpful without being a saviour”.

However there are some trends in the economy that are helping the budget situation, he said.

“The most recent figures factored in an iron ore price of $US38 a tonne. Now its closer to $US60 and that will contribute about $2 billion a year to the budget.”

A fall in unemployment from predictions in the budget would deliver another $2 billion and “I suspect the RBA might pay the government a dividend following the $8.8 billion [then Treasurer] Joe Hockey gave them”, Mr Koukoulas said.

That measure was to recapitalise the RBA after the value of its foreign reserves fell in response to a higher Australian dollar. A dividend to the government could be as much as $1 billion as the bank is making good profits, Mr Koukoulas said.

Given those factors, a more aggressive move on super following the Grattan Institute’s model could see the government coffers boosted by “between $10 billion and $14 billion a year”, Mr Koukoulas said.

That would push the budget towards balance by 2020