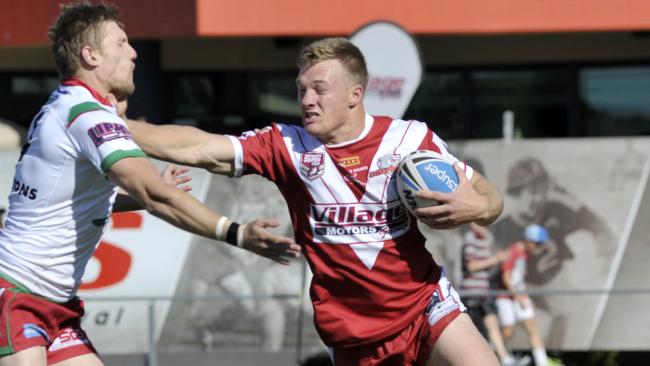 Intrust Super Cup: Redcliffe continue to improve and Seagulls break drought in our Round 7 wrap.

Redcliffe has rolled on to their fourth straight win in the Intrust Super Cup, coming from behind to beat Mackay 28-22 on Saturday night.

The Cutters came out of the blocks all guns blazing, scoring two tries in the first six minutes against what had been the best defence in the competition.

The Dolphins’ attack clicked towards the end of the first half and they led 16-14 at the break.

Brandon Lee and Aaron Whitchurch in the 65th and 71st minute respectively to claim a 26-20 victory.

Dolphins coach Adam Mogg said he was pretty happy with the win despite a few bad patches.

“We were really disappointed with the way we defended. But our attack is coming together really nicely,” he said.

“We certainly did some really good stuff. The positive thing is we got the two points.”

A BLISTERING opening 15 minutes was not enough for Norths to upset PNG in Saturday’s clash in Port Moresby, with the Hunters surviving a scare to prevail 38-22.

Coming off an impressive round 6 win over Mackay, the Devils looked on track for back-to-back wins then they raced to a 16-0 lead courtesy of tries from David Faamita, Rhett Webster and Jayden Berrell.

However, the equal-competition leaders would soon hit back through Atte Bina, Adex Wera and Benjamin Hetra to take an 18-16 advantage into halftime.

While a 53rd-minute try from Rogan Dean guided Norths back into the lead at 22-16, the Hunters turned on the afterburners in the final quarter to seal their sixth victory in seven games.

Despite the defeat, Norths remain just two points outside the top six ahead of a bye this weekend.

SOUTHS Logan Magpies used a 24-4 second half against Tweed Heads to propel themselves to their third victory of the season.

A double to Marion Seve and tries to Herman Ese’ese, George Fai and Tevita Pangai were enough for the Magpies to record a 28-10 win at Davies Park.

It was a much-needed boost for Souths Logan, who came into the contest with two wins and four losses.

Broncos back Seve opened the scoring when he crossed in the 19th minute but the Seagulls hit back in the 33rd minute when Samuel Irwin crossed, with Blake Anderson’s conversion putting the visitors up at the break.

The Seagulls extended their lead when Dane Clarke scored just two minutes into the second half but it was all Souths Logan from there.

Fai’s four-pointer in the 52nd minute was the start of a scoring spree as Ese’ese, Pangai and Seve each crossed to make it four tries in 15 minutes for the hosts.

The Magpies take on the Central Queensland Capras at Browne Park, Rockhampton, on Saturday at 6pm.

The Falcons started the game on the front foot through a try to former Stanley Rivers junior Rowan Klein in just the third minute, taking a 10-6 lead into the break.

The Blackhawks had come into the game off a bruising away trip to PNG but only improved as time ticked by.

The game was still up for grabs at 22-10 up until the 72nd minute, before Sunshine Coast conceded three tries in the space of six minutes.

Despite the loss, Falcons captain Troy Giess made a strong return from injury during the match. Nafe Seluini could also return this weekend for the trip to Hervey Bay in a match against Ipswich.

BALL control let the Easts Tigers down once again in the team’s 30-16 loss to the Northern Pride in Cairns on Sunday.

Easts completed less than 50 per cent of their sets against the Pride with the 2014 champions capitalising to run out to an early 10-0 lead.

But the shorthanded Tigers bounced back to be level at 10-all at the main break through tries to Ayden Lee and Whetu Austin.

“The game was there for the taking for us then, we were really happy to be level at the half,” Easts coach Scott Sipple said.

The second half belonged to the home side with handling errors continuing to plague the Tigers resulting in easy field position and more tries to the Pride.

Easts halfback Brent Warr crossed the line late for Easts but it was too late as the Pride finished with a 14-point win.

“I don’t know what to do about the ball control, it’s been a major problem for us. We might have to make some changes because our concentration isn’t good enough, guys are just dropping the ball cold,” Sipple said.

Easts travel to Burpengary to take on Redcliffe on Saturday.

THE Wynnum Manly Seagulls are finally off the mark.

It took them seven rounds but the Seagulls recorded their first win of the season in a 30-22 away victory over the defending premiers, Ipswich Jets.

Wynnum Manly were led by inspirational performances from forward Alex Barr and skipper Patrick Templeman with both players scoring a try and playing a role in several other four-pointers.

The Jets and Seagulls went try for try in the first half with Barr crossing the line first for the visitors before Nat Neale scored for Ipswich. A Templeman offload then set up winger Daniel Ogden for Wynnum Manly to lead 12-4.

Ipswich fullback Carlin Anderson and Josh Seage both scored tries within minutes of each other to have the home side leading 16-12 before a perfect chip kick from Seagulls halfback Matthew Seamark put Peter Gubb over the line and regain the lead heading into halftime.

Wynnum Manly then scored back-to-back tries through Ogden and Templeman to hold a 28-26 lead before Billy McConnachie put the Jets within a converted try.

Seamark then slotted a penalty kick over with just minutes remaining to seal the deal for the Seagulls first win of the season.

Wynnum Manly have a bye this weekend with the Jets to face Sunshine Coast at Hervey Bay on Saturday.