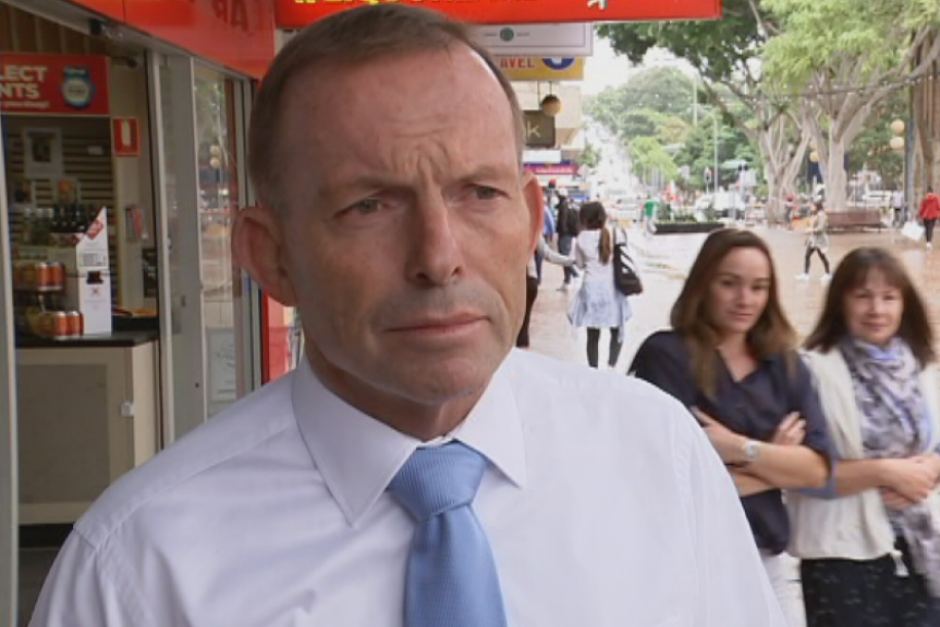 Former prime minister backs a surprise rival in the pre-selection battle in electorate of Mackellar.

Former prime minister Tony Abbott has intervened in the tense pre-selection battle in Bronwyn Bishop’s electorate of Mackellar, backing a rival to his one-time mentor.

In an interview with the ABC’s 7.30 outside his electorate office two days before Saturday’s pre-selection, Mr Abbott backed his confidant, Walter Villatora, who is contesting the seat.

“I’m not going to make any adverse comments on my colleague, my colleague of very long standing,” Mr Abbott said.

“Obviously I do know some of the candidates in the Mackellar pre-selection.

“One I’ve worked with very, very closely and I respect very much, and that’s why I’ve given him a reference.

“But in the end it’s up to the pre-selectors of Mackellar to make what they think is the best choice.”

The other main contender in the seat is long-time Liberal Party member Jason Falinski, who has the backing of the moderate faction.

The campaign in Mackellar has been marred by allegations of dirty tactics.

It follows a summer of discontent in the NSW division of the Liberal Party, with factional brawling over a number of seats and Senate positions.

Unlike in other states where there is an open vote among all party members, NSW pre-selections are decided by small groups of delegates that opens the door to factional stacks.

Mr Abbott has added his voice to the push for the party to be reformed.

“In the end let the Labor Party be the party of factions, the Liberal Party should be the party of merit and the problem with factions is decisions are made on the basis of numbers, not the merits, and that’s wrong,” he said.

Mr Abbott introduced rules to prevent lobbyists acting as king makers and the former prime minister is calling on the party to better enforce them.

“The point I made … at the beginning of my prime ministership is that you can be a lobbyist or a powerbroker but you can’t be both,” Mr Abbott said.

“It’s certainly my position and it should absolutely be the position of the NSW Liberal Party.”

Another long-time Liberal member David Miles has risked suspension to speak out against lobbyists being involved in pre-selections.

Mr Miles runs a rival lobbying business and said the industry group prevented members playing such an active role in selecting the candidates they may later seek meetings with.

“If you are playing an active role within a political party at a senior level and you’re also then seeking to lobby governments made up of those people that you potentially put there, I think that’s a perceived conflict of interest, if not a real one, that our organisation believes best to be avoided,” he said.

Mr Campbell declined to comment and Mr Photios did not return calls.

“The selection procedure and meeting were carried out in accordance with the Division’s constitution,” the memo stated.

“The failure to give 2 alternates had no effect.”

“We are very pleased with our NSW Senate ticket, which includes two very talented women with diverse backgrounds: the Hon. Concetta Fierravanti-Wells and Hollie Hughes, who will continue Bill Heffernan’s work representing country NSW,” Mr Zimmerman said in a statement.

“Our preselected Liberal candidates represent the broad cross section of the community and the NSW Liberal Party.”