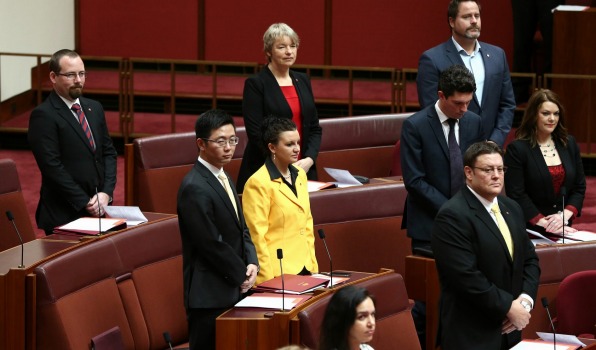 Senate crossbenchers are maintaining their rage against the Turnbull government's demand they restore the building industry watchdog or face the voters.

Parliament will be recalled in mid-April to allow the Senate time to consider industrial relations legislation it has previously rejected.

Prime Minister Malcolm Turnbull has vowed to call a July 2 double-dissolution election if the upper house refuses to pass bills for the Australian Building and Construction Commission and Registered Organisations Commission.

Independent senator Glenn Lazarus is refusing to be bullied by the government.

'It's purely a political football,' he told ABC TV on Tuesday.

'The government hasn't rolled up its sleeves and tried to negotiate with us.'

Fellow independent John Madigan hit out at 'yet another Machiavellian stunt' by a prime minister focused on politics rather than policy.

'I have no confidence the government intends to negotiate in good faith for the passage of these bills,' he said.

Fellow crossbencher Nick Xenophon thinks Mr Turnbull's surprise move is 'decisive and bold' and a circuit breaker after he had been languishing a bit.

'It is a twin-edged sword,' he said of the double-dissolution election threat.

The crossbenchers had the option of trying their luck in an election where they needed only half the quota of votes to retain their Senate seat.

Independent Jacqui Lambie insists she won't have a gun held to her head.

The only crossbencher backing the government is Family First's Bob Day, who Mr Turnbull phoned on Monday, hoping he could persuade his colleagues.

'Regrettably, they seem to be even less supportive of the bills this year than they were last year,' he said.

Finance Minister Mathias Cormann says the crossbenchers have had long enough to consider the bills.

'This is not an ambush, this is not blackmail,' he told ABC radio.

Attorney-General George Brandis says the government wants the bills to pass in their existing form.

'The point of the Senate is to be a house of legislation, not a house of refusal or obstruction.'

Employment Minister Michaelia Cash will be negotiating in good faith, but doesn't want amendments which change the fundamentals of the legislation.