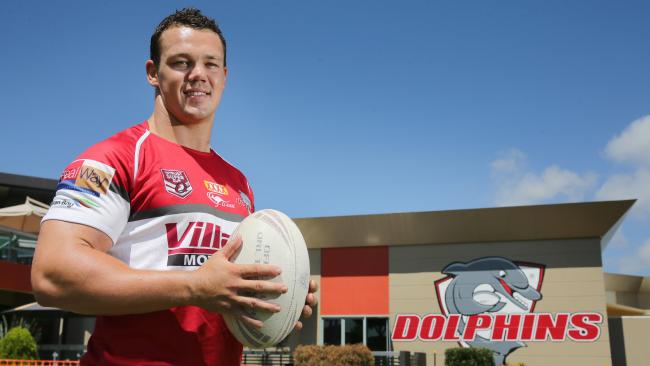 When Sam Anderson first fronted up for Redcliffe Dolphins training, all he was looking for was a change of scenery.

The 24-year-old said it was “a bit of a shock” to be handed the captaincy but being charged with the privilege has him inspired to lead his side to “something special” in 2016.

“We’re aiming for the top. There’s no reason that we can’t,” Anderson said.

“The group of boys themselves. Everyone’s down to earth, they’re hard workers and we’ve got high expectations from this year.”

He said he was under no illusions as to the expectations of a tight-knit rugby league community such as Redcliffe.

Anderson grew up in Newcastle before joining Penrith Panthers, where he played seven NRL games and captained the club’s NSW Cup side.

The inspiration for his move came from his battles in blue against Queensland Residents but he said his focus was solely on the red and white rather than earning a maroon jersey.

“It would be a bit weird if it did happen,” he said.

“I wanted to challenge myself in the Queensland competition. I’ve played against the residents side the last couple of years and they’re always strong and I kind of got to the point of my career where it was time for a change.”

Anderson said the first part of the season away from home would be a big challenge but he was determined to make sure his side was in a good position to reward the Dolphin Oval faithful at the back end of the season.

“I’ve heard that here when the boys are winning it’s a pretty good atmosphere playing here compared to some of the other Q-Cup sides, so I’m looking forward to (it) once the new ground’s finished and we’re playing good footy hopefully,” he said.

Dolphins coach Adam Mogg said Anderson would lead by example with his work ethic and honesty.

He said he had spoken to 2015 captain Luke Capewell about his key role leading the team around the park this season.

Capewell will miss Round 1 due to injury alongside Evander Cummins, putting pressure of the backline depth.

Tyson Cleal has a calf strain and could be out “a couple of weeks”.