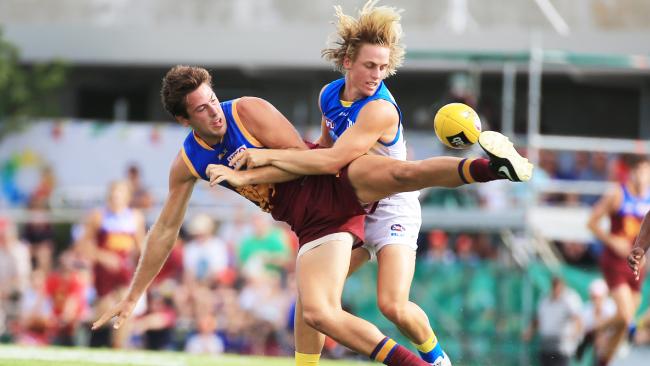 The competition for places in the Gold Coast midfield is now red hot after the Suns surged to a 25-point win over Brisbane in a windswept NAB Challenge clash at Burpengary yesterday.

Gold Coast were without first-choice on-ball stars Gary Ablett, Jaeger O’Meara, David Swallow and Dion Prestia but still won 33 more contested possessions than the Lions in their opening hit-out for the season.

Jesse Lonergan (23 disposals, six tackles), Touk Miller (16 disposals, one goal) and ex-Eagle Matt Rosa (19 disposals) were the prime movers for the Suns midfield along with the rookie-listed Darcy MacPherson (12 disposals, one goal and 10 tackles) setting the tone in the forward line.

Throw in reliable veteran Michael Rischitelli, Mitch Hallahan and Aaron Hall and places for the Round 1 showdown with Essendon will be hotly contested at Carrara.

Acting captain Tom Lynch was a class above every forward on the ground with three goals and six marks but Eade said the midfield changed the momentum after the sloppy first quarter when Brisbane led by one point.

“With today’s game with 90 rotations, you are going to need a lot of mids.’’

Eade said he would make up to eight changes for the Gold Coast’s next NAB Challenge match against West Coast in WA on March 3 when the Suns will field a very inexperienced side.

He said Peter Wright was more impressive than Sam Day yesterday with the two key forwards competing for the one spot alongside Lynch.

Brisbane coach Justin Leppitsch was disappointed with the way his side moved the ball as the Lions kicked three goals after halftime.

No.2 draft pick Josh Schache had five touches, four marks and a behind in the first half and was rested after the main break.

He said the performances of young players such as Rhys Mathieson (13 disposals, one goal) stood out.

“He is one that will be pushing early in the season to get a game,’’ Leppitsch said.

“Their midfield was a little bit stronger and spread better than ours.

“They had that little bit more experience in the midfield and at the ends of the ground. Those little things are the difference.’’

He said Brisbane would be playing their best available side from now on, starting with the clash with St Kilda in Mackay on March 6.

Mitch Robinson had a game-high 24 touches as acting Lions captain.

1. Look out Brandon Matera. Rookie-listed Sun Darcy MacPherson was very lively playing as a small forward after a sizzling summer. He kicked an early goal, took a lovely contested mark and provided plenty of suffocating defensive pressure. He’s only one injury away from elevation to the senior list and an AFL debut.

2. Simon Black wasn’t kidding when he described Lions greenhorn Rhys Mathieson as “super competitive’’. The first-year midfielder was in the thick of the action winning four free kicks by putting his head over the ball and lotting a goal with a beautiful banana kick.

3. Leadership suits former wild child Mitch Robinson. Brisbane’s entire leadership group was on the sidelines so the ex-Carlton enforcer was makeshift skipper. He responded brilliantly with 14 touches by halftime and a game-high 25 touches by the final siren..

4. Touk Miller shone brightly in his rookie year in 2015 and he produced some classy touches to show he will push strongly for a midfield berth this year. Ex-Eagle Matt Rosa was also super silky in his first outing in a Suns jumper.