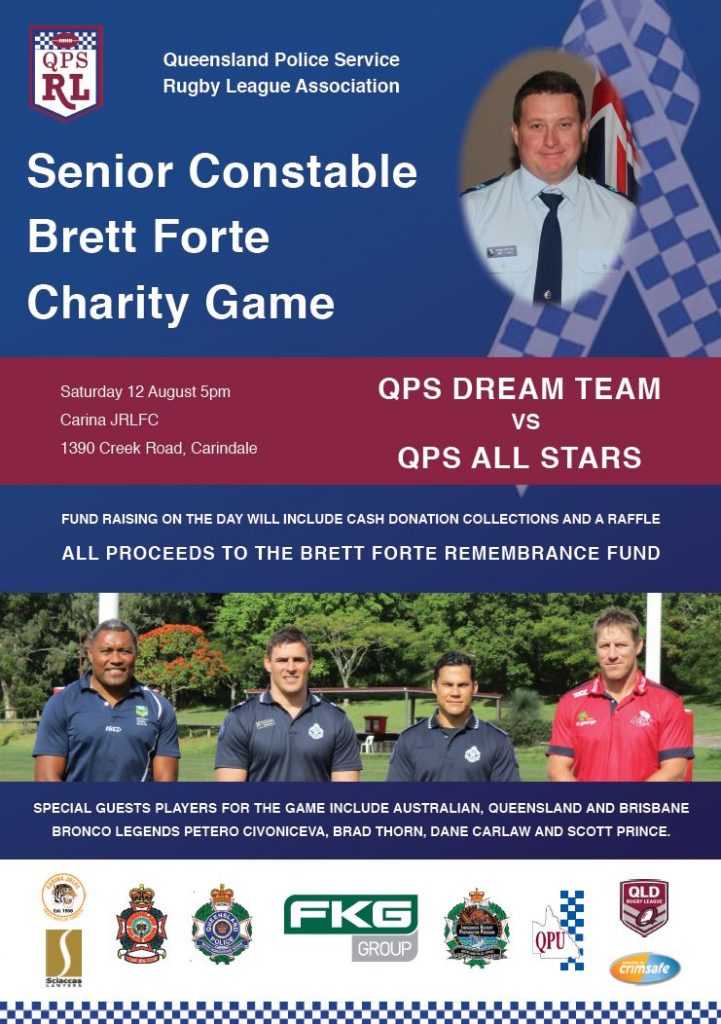 The QPS Dream Team will take on the QPS All Stars with Australian, Queensland and Bronco legends Petero Civoniceva, Brad Thorn, Scott Prince and Dane Carlaw having a run on the field. Petero and Scott will be playing for the Dream Team while Brad and Dane will be lining up for the All Stars.

The game will be played at the Carina Junior Rugby League Football Club, 1390 Creek Road, Carina on Saturday, August 12 commencing at 1.30pm with the main game commencing at 5pm.

Sporting memorabilia will be auctioned, raffles conducted and cash donations can be made on the day. A sausage sizzle and memorial polo shirts will also be available with all proceeds going to the Brett Forte Remembrance Fund.

This free event is opened to the public who are encouraged to attend to help show their support.

You can hear Sgt. Glen Peatling talk with the Grapple team on air with this podcast.

Have over 12000 members including unsworn staff and Police Liaison Officers, serving at almost every town throughout the state of Queensland. The Service encourages and applauds community and sporting involvement from its members.

The Queensland Police Service Rugby League State Championships have been run since 1987 and are the cornerstone of our Association. Our Association boasts participation at these championships of up to 12 teams, from every region within the state. These weeklong championships are held annually at various locations throughout the state, involving in excess of 300 players, officials and support staff.

We are the only truly state-wide Police Rugby League Association in Australia.