BPW Caboolture Presents They Said No: Building Resilience in Business Friday December 4 from 7 am 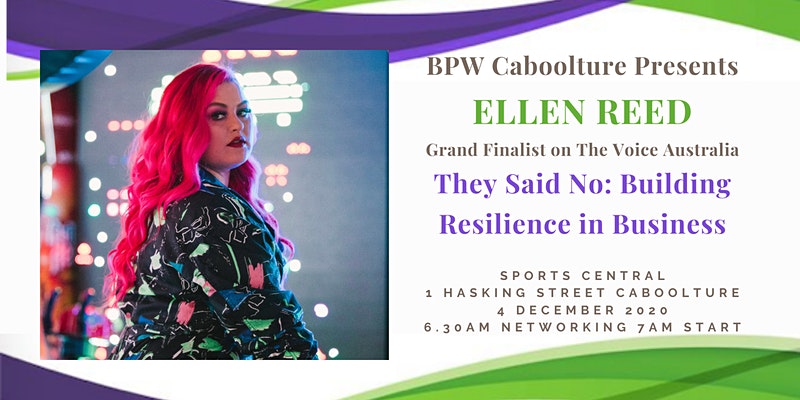 Join us at our December Breakfast when we welcome guest speaker Ellen Reed, Grand Finalist on The Voice Australia.

They Said No: Building Resilience in Business

Ellen has heard the word “No” so many times it has almost lost all meaning; however, it’s not our knock-backs that define us, but our ability to process what has happened and move forward. Listen as Ellen tells you stories about the Music Industry and some proven tips and strategies to improve your mental wellbeing and resilience in business.

Placing fourth overall, Ellen won the hearts of a nation with her soaring voice, giant heart and unshakeable spirit. Since leaving the show, Ellen’s popularity and profile has continued to soar as she’s cemented her voice not only as one of Australia’s most gifted singer/songwriters, but as a passionate brand ambassador and activist.

Ellen is widely sought-after as a featured artist and special guest, collaborating with countless big-name brands and Queensland institutions including Suncorp Stadium, Camp Quality, Bridge to Brisbane Day, Lord Mayor’s Christmas Carols, State of Origin and the Channel Nine Telethon. She is also a respected and admired ambassador for the LGBTIQ+ community, headlining Big Gay Day, ONE on Saturday, Wear It Purple Day and MELT queer arts festival.

Ellen is also the proud ambassador for the Queensland Firebirds Netball Team and her debut single ‘Never Surrender’ is the team’s official anthem.