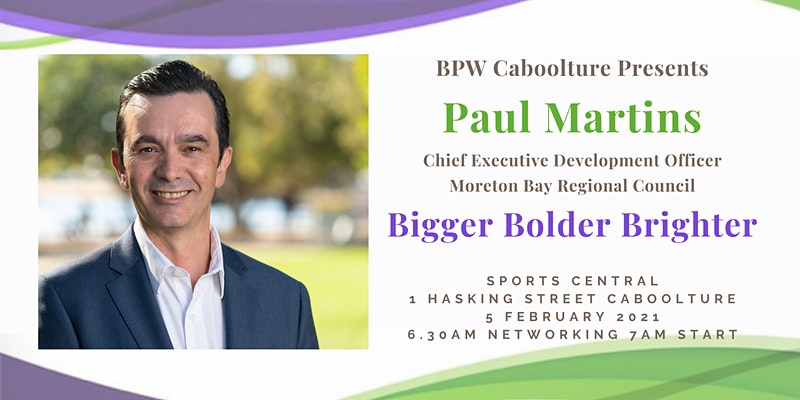 Heading in a new direction, Moreton Bay Regional Council drives the Regional Economic Development Strategy 2020-41 towards a bigger and bolder region with a brighter future for residents for many years to come.

The REDS outline a plan to diversify the region’s economy, cultivate growth opportunities, and invigorate the local job market. Specifically, identifying opportunities to best support the development of existing businesses and attract new investment, transforming our region into a nimble and resilient powerhouse.

Chief Economic Development Officer, Paul Martins will translate the vision of the REDS, explain the four pillars to success, deep dive into the key initiatives and discuss how as we as unified business partners can work collaboratively to turn a vision into reality.

Paul has a mixture of private and public-sector experience. He was the CEO of a Queensland Telstra Innovation Award Winning SME with 120 staff across five locations, and a Director of Sales and Marketing for Asia and Latin America for an advanced manufacturing business.

Most recently, Paul was Head of Economic Development for Sunshine Coast Council. His team supported more than 3,000 businesses annually and in the last six years: facilitated the creation or ongoing employment of more than 15,000 jobs; achieved $3.3 billion in regional economic impact; and sponsored more than 300 major tourism and sporting events providing an ROI of $32:$1. Paul was also a key player in: securing Youi insurance’s global headquarters on the Sunshine Coast; establishing the region’s first national elite sports team, the Sunshine Coast Lightning; and helping to secure the Sunshine Coast international submarine cable.

Paul is a former diplomat, having served as Senior Trade and Investment Commissioner and Minister (Counsellor) Commercial to Malaysia and Brunei with the Australian Trade Commission (Austrade), and Head of their ASEAN Infrastructure and ASEAN Mining and Oil and Gas Units. Paul also completed Trade Commissioner postings with Austrade to Indonesia and Mexico (including Central America and the Caribbean). Together with his teams, Paul successfully facilitated more than $7 billion in export sales during his time with Austrade, plus hundreds of millions of dollars in investment and jobs into Australia.

Paul has Bachelor of Arts in Modern Asian Studies and an MBA in Entrepreneurship and speaks three languages. He is currently the Queensland Chair of the Australia-Indonesia Business Council (AIBC) and has held a number of national and international Board positions. He is married with two children.