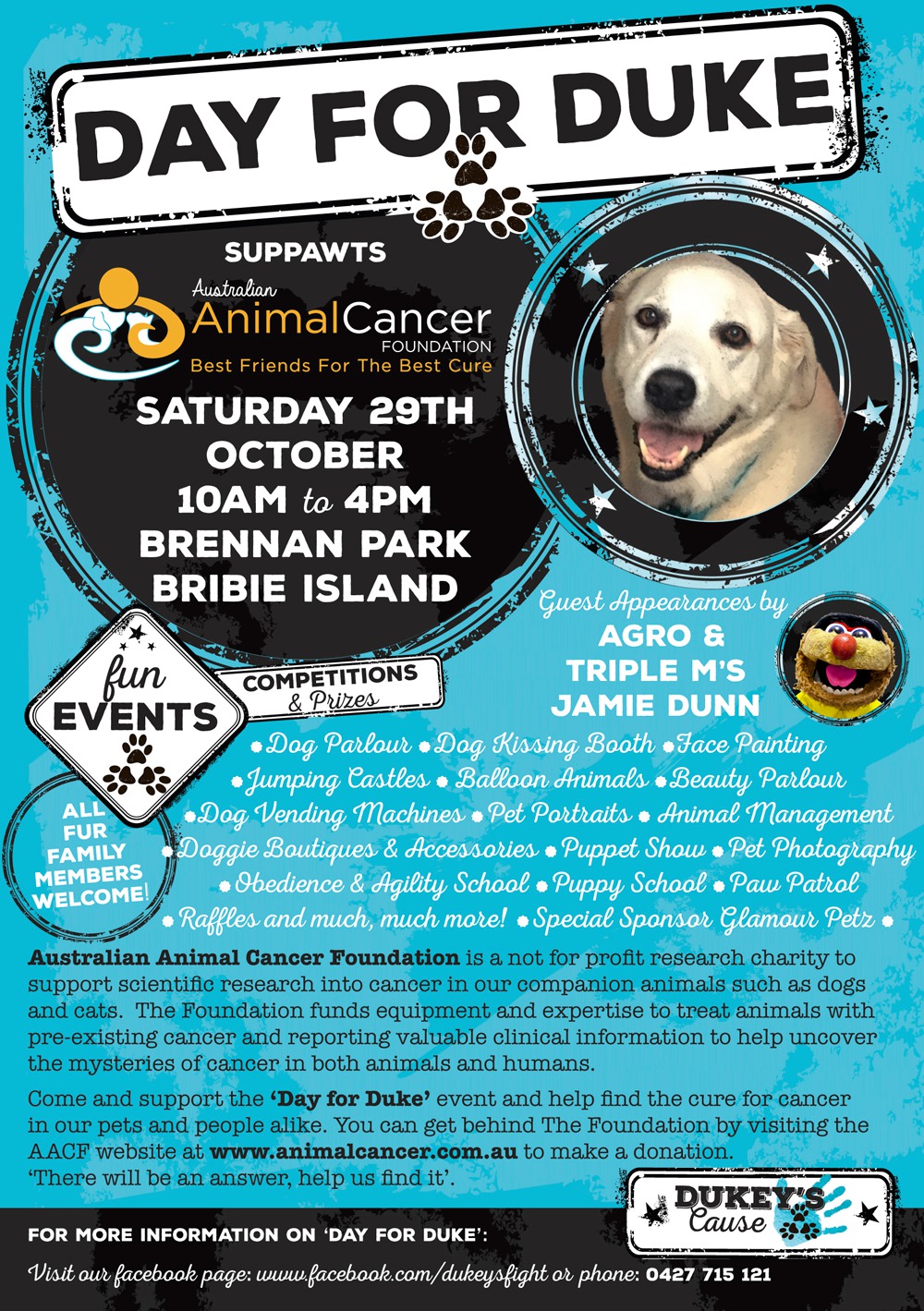 South East Queenslanders are being invited to gather to help raise awareness and funds for research into cancer in animals on a day inspired by the death of a much-loved dog.

Duke was a Labrador Maremma Sheepdog cross, who sadly passed away from an aggressive form of cancer called Histiocytic Sarcoma (HS), which is found in both animals and humans.

His parents, Brooke and Clinton, have decided to organise a fundraising event to support the not-for-profit research charity Australian Animal Cancer Foundation (AACF).

Day for Duke will be held in Brennan Park on Bribie Island on Saturday 29 October from 10am to 4pm. There will be a range of activities for families and their pups, including a dog washing and grooming parlour, doggie boutiques and accessories, obedience and agility school, pet photography plus a jumping castle, face painting, raffles and much more.  Many local businesses have been eager to throw their support behind the event, with Triple M’s Jamie Dunn and Agro attending.

Dr Rod Straw, founder of the AACF, says it is important to bring much needed attention to the prevalence of cancer in small animals.  “We treat hundreds of animals with cancer each year and with the help of The Foundation, we can learn how to better manage and even cure cancer in pets, which translates directly to benefit people,” Dr Straw said.

Duke had his leg amputated and underwent surgery and chemotherapy to remove his cancer. Unfortunately, the cancer was too aggressive and soon returned as a mass in his abdomen.

Duke’s mum, Brooke, says she wants other dog owners to know what warning signs to look for and be vigilant in recognising them, after Duke was initially misdiagnosed from an occurring limp.

“It doesn’t matter what age or breed your dog is, cancer doesn’t discriminate. It can also metastasize at a much faster rate in dogs than humans,” Brooke said.  In humans, cancer kills 1 in 3 women and 1 in 2 men. The incidence is almost equal in dogs, killing 50% of dogs over the age of 10 and 33% of those under.

Duke’s parents intend for the event to become an annual occurrence, providing long term support to the AACF and cancer research in animals and humans alike.