From Sunday to Wednesday the Bureau of meteorology is advising severe heatwave  for Moreton Bay Region and South East Queensland Prolonged.

* A few locations in the southwest look to have set November minimum temperature records this morning, with several locations remaining above 30 degrees overnight.

* Further records are expected to break as inland temperatures are forecast to reach the mid-40s over the southern interior, while sea breezes will moderate the heat along the coastal fringe.

* A brief respite from the heat about the southeast on Thursday following a southeasterly wind change, before temperatures rise once more into next weekend.

* Showers continuing along the northeast tropical coast, though on an easing trend today and tomorrow.

* Isolated falls of over 100mm have been recorded in the region in the last 24 hours, with more widespread falls of 10-40mm.

* Besides areas around the southern Gulf, the chance becomes less likely early next week.

* Shower and thunderstorm activity is expected to return to central and southeastern parts of the state from mid to late next week.

* A strong wind warning has been issued for the Sunshine Coast, Moreton Bay and Gold Coast waters later today and into tomorrow morning.

* Severe fire danger is expected in southwest districts on Tuesday, due to the very hot and windy conditions, shifting to the southeast interior on Wednesday.

* Raised dust is likely over the Channel Country on Tuesday and Wednesday in strong southerly winds behind a trough. 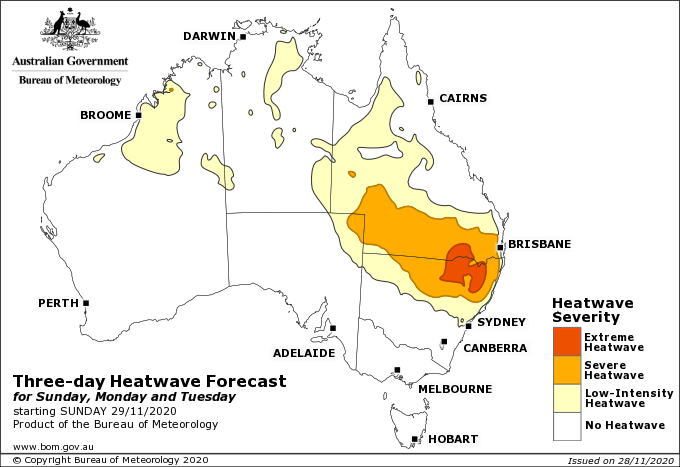