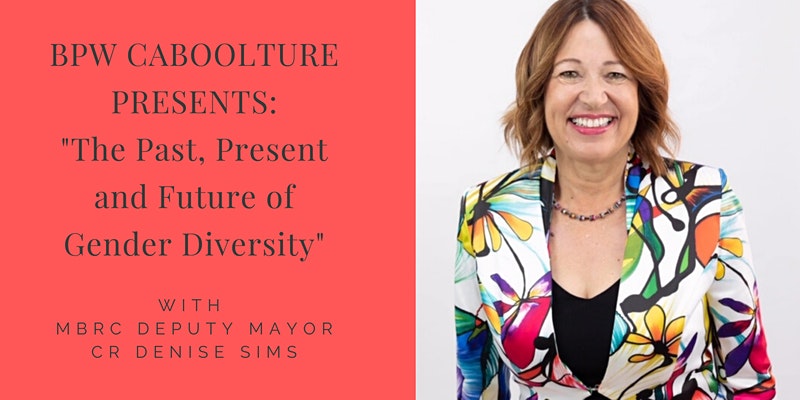 Gender diversity has been proven to strengthen boardroom governance as it brings a diversity of skills and ability.

What changes need to occur for this representation to increase?

Join us as our Deputy Mayor Cr Denise Sims looks at how far we have come, what lessons we have learned and what we need to do for the next generation.

Denise worked in the local retail industry while her children were growing up then went on to become a Financial Planner and eventually owning her own successful practice.

One of Denise’s passions is teaching financial literacy; a cause she has advanced through TV, radio and workshops.

In 2006, Denise moved into the not-for-profit sector to further pursue her interest in helping others and giving back to the community. After a period working in a community focused role for the Queensland Parliament, she worked for the Salvation Army helping those most in need.

Denise has served on numerous boards in the not-for-profit sector and served on the board of a local charitable organisation.

After being elected to Council in 2016 Denise became instrumental in the development of the Disability Access and Inclusion Plan which Council adopted in 2018. She has served as Chair of the Lifestyle and Amenity committee and has been passionately advocating for the Koala health monitoring program on the Mill Site at Petrie which has seen a 25% growth in numbers since commencement.

Recognising how important parks and open spaces are for social wellbeing, Denise has been instrumental in upgrading 23 spaces in the community with another 18 planned for the 20/21 F/Y within her Division.

Denise was uncontested in the 2020 Council elections and was elected Deputy Mayor by her fellow Councillors.

We would love for you to join us.