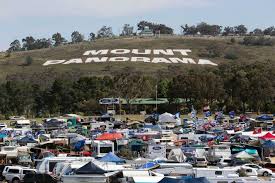 This year Craig Lowndes aims for his 7th win while on his tail Jamie Wincup desiring a 5th win, still a far cry from the record 9 wins by Peter Brock.

Breaking: The winner of the 2018 Bathurst 1000 is Craig Lowndes his 7th win equal Jim Richards, In second comes Scott Pye, ahead of Scott McLaughlin to complete the podium.

A look at last years standings may offer some insight to how things will play out, but in motorsport last year is history and those embarking on this great pilgrimage will testify it really is any ones chance at glory.

The Final Standings from 2017:

And in a stunning boilover, Erebus Motorsport teammate Anton de Pasquale will line up alongside Shane van Gisbergen on the second row after producing a drive beyond his rookie season.

De Pasquale scorched the track and might have produced an even quicker time except for a final turn slip.

His time of two minutes 4.3498 seconds stood through the shootout — even after van Gisbergen, Scott McLaughlin and Craig Lowndes took to the track — until Reynolds broke through.

Reynolds produced a 2:04.0589 time before provisional polesitter Jamie Whincup took to the track for the day's final lap.

Whincup started slowly but made up ground on the final sector, missing out on top spot by the smallest margin.

Now its on to the race it self, and It's been nigh on 60 years since the first 'Great Race' in Bathurst's Mount Panorama. On October 4, a new generation of drivers will test their mettle on the one of Australia's toughest Supercar circuits: the Bathurst 1000. Here's how to watch the race live, free and online in Australia.

The Bathurst 1000 is held in Bathurst, New South Wales on the Mount Panorama Circuit.

The 161 lap race that is the marquee event of the weekend occurs on Sunday, October 8 at 11:10am Australian Eastern Daylight Time (AEDT). The race will conclude at approximately 6pm on the same day.

Here’s the times in all Australian capital cities:

If you're keen to watch the preceding Supercar races - of which there are more than 30.

On Saturday, October 6, there is a practice session at 10am AEST before the Top Ten Shootout, which takes place at 5:10pm AEST. (You can check out the full schedule below.)

If you’re in Australia, you’ve got a couple of options – the most obvious would be to catch it on free to air TV, with Channel Ten broadcasting all the action from Friday to Sunday. Unfortunately, if you were looking to stream it online, via the tenplay app, this will not be possible for any of the Bathurst coverage.

Fox Sports channel 506, on Foxtel, will be covering all the days events from October 4 to October 7, starting as early as 7:15am AEDT each day.

How To Watch The Bathurst 1000 Overseas

New Zealanders can use the Sky Go platform to stream the race, but you will need to sign up for Sky and download the Sky Go app or go to the live desktop site.

If you live outside of Australia and New Zealand, you may need to invest in Superview, which is the streaming subscription offered by the Supercar championship. This gives you livestreaming access to every race of the Supercar season, not just Bathurst, but it will set you back approximately $39.95AUD.

Alternatively, shop around for a VPN provider with access to Australian servers and then sign up to the aforementioned Foxtel Now free trial. Here are some recommended VPNs to consider.

You can also sign up for Motor Trend On Demand, a live streaming and on demand content service specifically for automotive events. Currently, they offer a 14 day free trial period just like with Foxtel Now. (If you're in Australia, you can still use this service, but you will have to access it through a VPN.)

It’s always a good idea to keep one eye firmly planted on the Reddit group for the V8 Supercars. In addition to having fun discussions with like-minded auto fans via IRC, the group will direct you to broadcast feeds of race control and potentially other streams that become available on free streaming sites.

A second Reddit community, r/motorsportsstreams, provides links to motor sports events around the world, including Bathurst. (To use the streams provided here, you will need VLC Media Player.)

To load the stream link into VLC, open VLC, click on 'Media' in the toolbar, then 'Open Network Stream' and paste the link in the dialog box. Be wary, these streams may buffer frequently, depending on their origin.

All results will be available on the official Supercars website.

Jamie Wincup (Holden) The seven-time series champion may have claimed four Bathurst titles but he has been ruing his luck at the mountain since his last win back in 2012. Arguably the cruellest result was in 2016 when Whincup crossed the line first, only to be relegated to 11th after a post-race penalty for causing a late crash. Has won the last two races including Bathurst warm-up Sandown 500. Co-driver is Paul Dumbrell.

Craig Lowndes (Holden) Crowd favourite Lowndes promises a fitting finale in what will be his last Bathurst as a full-time driver. In his 25th crack at the Great Race, the 44-year-old Holden driver is aiming to move his Bathurst victory tally to seven - equal second with Jim Richards behind King of the Mountain Peter Brock’s nine. Returns next year as an enduros co-driver. For the fifth-straight year Steven Richards will be Lowndes’ Bathurst co-driver.

Scott McLaughlan (Ford) The Kiwi will arrive at Mount Panorama in need of some self confidence after letting his Supercars series lead slip in the past month. At one stage appearing unstoppable with five wins in seven races this year, McLaughlin now must try to reel in Holden’s Shane van Gisbergen’s 55-point series lead with a maiden Bathurst victory. The 25-year-old has never made a Bathurst podium in six attempts. Co-driver is Alexandre Premat.

Shane Van Gisbergen (Holden) Best finish is second in 2016 but few are discounting the series leader’s challenge at Mount Panorama this year. The Kiwi won’t assess his hopes of a second Supercars championship until after the enduros but can blow out his series lead with a whopping 300 points on offer for the Bathurst winner. Co- driver is Bathurst rookie Earl Bamber, a two-time Le Mans 24 Hour winner.

David Reynolds (Holden) Once more famous for making the “shoey” popular, Supercars funny man Reynolds was taken seriously when he claimed his maiden Bathurst crown last year. A controversial figure off track thanks to his infamous description of an all- female team back in 2015, Reynolds is now considered the real deal on it. Currently fifth, Reynolds will hope to make a play for a maiden championship by becoming the first back-to-back Bathurst winner since Whincup-Lowndes in 2008. Co-driver is again Luke Youlden.