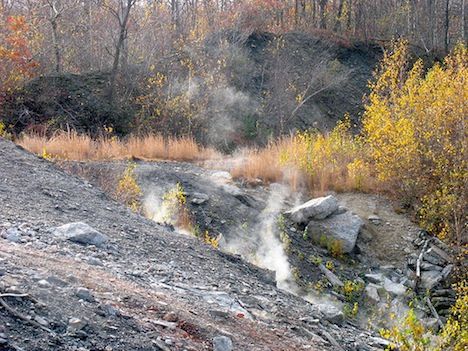 In rural and bush Queensland look out for underground fires

During bush fire season fires do not just happen above ground which is visible for all to see and deal with.

Quite often these unseen fires can travel many kilometres through a network of root systems underground slowly burning with little warning other then some smoke emanating with little or no flames and obviously much harder to track down.

In Queensland where the soil is particularly dry offering little resistance, what started out as a bush fire lingers on for some time.

The Rural Fire Service has warned for land owners to underground at root systems as bushfires could travel underground across parched parts of Queensland.

RFS Superintendent Allan Gillespie said soils throughout much of the state are extremely dry and that can help the spread of what is called "subterranean fires".

"What we don't want are fires starting today that will potentially impact tomorrow," he said.

A subterranean fire burns through a tree stump or a tree and it burns what you can see, but what you're not seeing is that it is burning underground through the root system.

"The soil moisture levels are at record lows in south-east Queensland and so a fire will travel underground."

Superintendent Gillespie warned that these sort of fires can then "pop out" of the ground days or even weeks later.

"The root systems of these trees can go for many, many metres into unburnt country and pop out three days later, five days later, three weeks later and start another fire," he said.

While underground fires are rare, it would not be the first time such a fire has happened in Queensland.

"We haven't had these sort of conditions for a long time and they're right at the moment for this type of phenomenon to occur," he said.

He said they had also gathered together a special taskforce to focus on the fire threat in the south-east.

"We're moving a strike team from the Gold Coast up into the Ipswich area so we can respond to any incidents in the Lockyer and Somerset areas," he said.

"We've also deployed additional aircraft and command staff into those areas as well."

He urged people in bushfire-prone areas to have their survival plans ready but said the fire service was well prepared for any emergency.

"We still have crews on that fire today looking at subterranean fire issues," Superintendent Gillespie said.

Underground fires are common in southern states but Superintendent Gillespie said conditions were so bad in Queensland that it could become commonplace here.