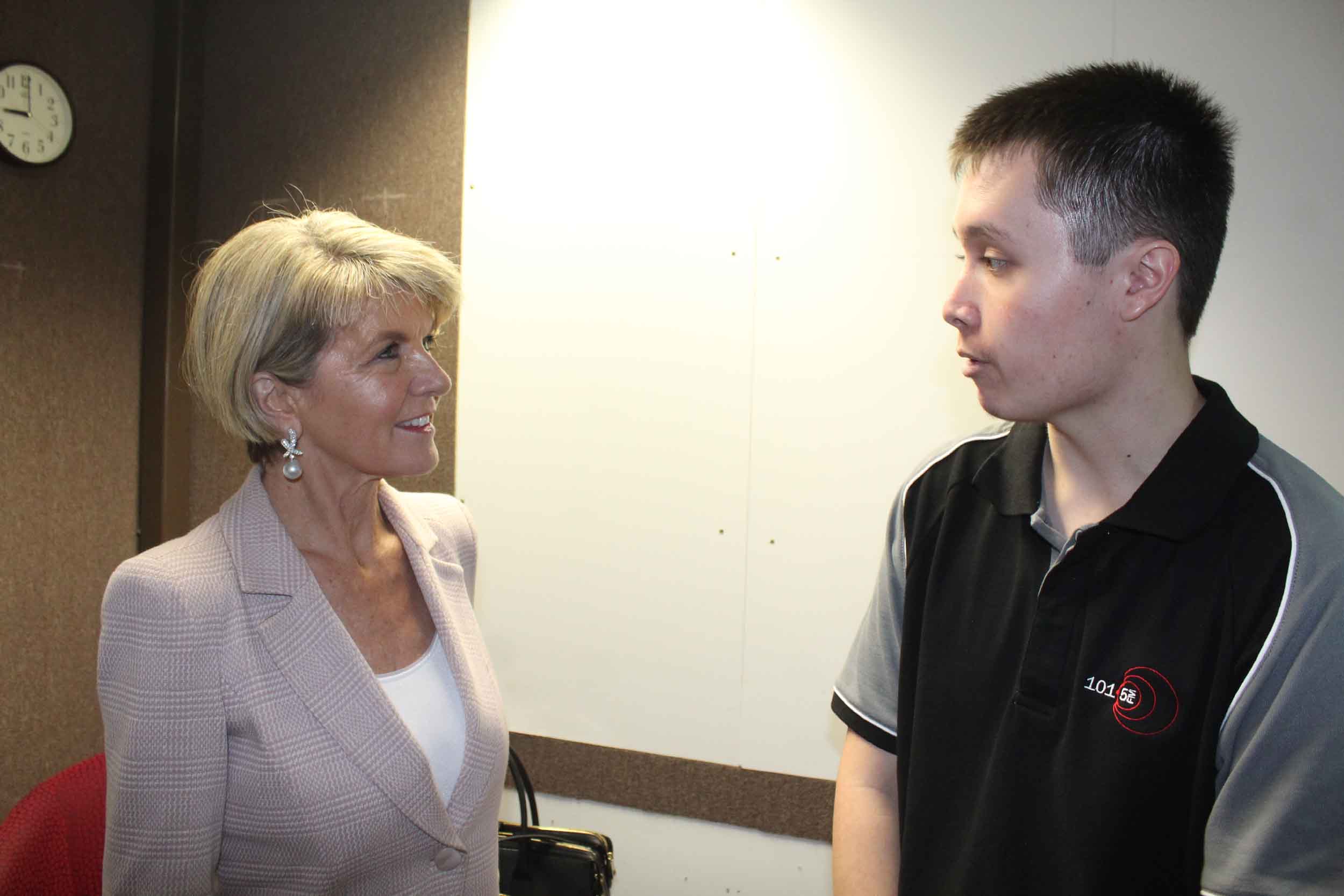 Photo above: 101.5 FM trainee Jackson Dunn gets encouragement from the Foreign Minister The Hon. Julie Bishop during her visit to the studios today before a one on one discussion on a number of topics .

The Deputy Leader of The Liberal Party in Federal Parliament and Australia's Foreign Minister The Hon. Julie Bishop who has visited Caboolture many times in the past, arrived early Monday morning to not only support the LNP candidate Trevor Ruthenberg in the forthcoming By Election set for July 28 but to unveil new world class initiatives to assist apprentices in welding.

Opening the discussion the relevance of the UN with so many world hot spots and challenges.

On the diplomatic stage is the UN worthy of being the worlds peacemaker when the war on isil continues, China is spreading it tentacles politically, economically and now on the airwaves taking over the now defunct Radio Australia's frequencies Australians want certainty of their future are we going to get it.

The Foreign Minister responded saying the UN more then ever is not only relevant but has been instrumental on preventing more large scale wars from happening through its peace keeping initiatives.

Australia is at the forefront of stability by engaging with the world at large with many nations and through the UN Security council where Australia's leadership excelled.

There has been ongoing activity with the negotiations and the formulation of policy on the new Australia-European Union Free Trade Agreement, revealing that the The High Representative of the Union for Foreign Affairs and Security Policy Federica Mogherini will be visiting Sydney with possible further agreements and putting the final touches on the final agreement between Australia and The European Union.

With Britain outside the EU there is ongoing discussions already in progress for  free trade agreement between Australia and the UK with Britain's exit from the European Union, however the Foreign Minister stated that nothing concrete can be set in stone until it is we know what will be agreed to in terminating its EU membership to the Common Market.

GST changes for Queensland, will amount to 517 million dollars extra money with the one in a generation alteration to the GST distribution to the states with extra funding being contributed by the Federal Government in to the GST allocation to ensure no state falls below 70 cents on the dollar as opposed what now is happening West Australia was getting only 0.29 cents on the Dollar and Northern Territory was getting at one state $4.50 for every dollar put in to GST.

The States will remain totally accountable for the money it receives and how they spend it.

Nuclear Energy and Sustainable Power was also discussed, with a priority to have affordable and reliable power through out Australia, nuclear energy can only gain legs in the discussion if it is bi-partisan in Federal Parliament, The Hon. Julie Bishop acknowledged that Australia is fortunate it is not in a earthquake prone zone so there are good arguments for it to be embraced  until then Coal fired power utilities will be the preference for stable base power.

Welding apprenticeships $750,000 initiative to bring welding simulators that will be brought to Caboolture as a skills hub,  enabling young apprentices get access to world class training which is cheaper and more efficient.  The Foreign Minister said this is going to be trialed in Caboolture first and when successful may be replicated to not only other places in Australia but perhaps other industries.

It should be noted that successful apprentices will gain world class qualifications in Cert. 3.

The Press release on this exciting initiative below.

The Thai cave rescue so far 4 this morning more to come and big rains on the way Australia's commitment to this event.  The Hon. Julie Bishop also illustrated how invaluable Australia's contribution has been include 19 people on the ground, an South Australian Doctor as well as an anesthetist / experienced Diver were on hand to check the health of the young boys and if they are fit for a rescue along with  expert divers from Australian Federal Police and Navy Divers, Australian Defence and DFAT crisis rescue teams.

We are pleased to announce the LNP will establish an Advanced Welding Training Centre in Caboolture to train and skill local welding apprentices and workers from local businesses.

The Government will collaborate with Weld Australia for the purchase of 10 state-of-the-art welding simulators and an advanced technical training facility, to train qualified welders and transitionary workers to international welding certification standard ISO9606. This is the minimum requirement for working on rolling stock, defence and infrastructure projects.

The Centre will help make Caboolture a skills hub. Apprentices will receive valuable and intense practical training, making them job-ready to take advantage of the opportunities of a stronger economy.

The system’s flexibility and mobility means it can be transported to companies around Longman for onsite training, saving SME’s money.

Combined with the Turnbull Government’s new Skilling Australians Fund that is set to support more apprenticeships across Australia, today’s $750,000 funding announcement will ensure local businesses can grow and compete for contracts - locally, nationally and internationally.

The Turnbull Government is backing businesses across Caboolture and South East Queensland with lower taxes and support through initiatives like this.

$100,000 to establish infrastructure and ensure local trainers have the skills and knowledge to deliver world-class training for new and existing industry workers.