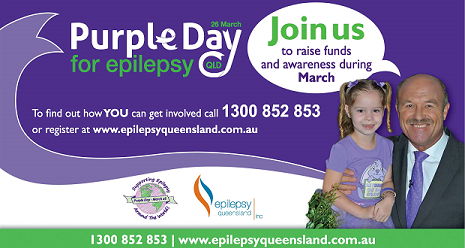 Queensland shines a purple light on Epilepsy on March 26

To raise awareness and increase understanding about one of the most common serious brain disorders – epilepsy, today March 26.

Queensland will be turning purple in support of the estimated 100,000 Queenslanders diagnosed with epilepsy.

Thousands of Queenslanders have also joined the campaign and will be wearing purple to work/school and/or hosting Purple Day fundraising events.

For the first time, a group of adventurous supporters will be scaling to new heights to raise funds and awareness whilst climbing the Brisbane Story Bridge, as it turns purple.

Purple Day for Epilepsy is recognised worldwide on 26 March. This globally celebrated event is a powerful step toward unmasking the myths and mysteries associated with a disorder, which has a profound effect on so many lives.

Purple Day was founded in 2008 by 9 year-old Cassidy Megan of Canada.

Motivated by her own struggles with epilepsy, Cassidy started Purple Day to show people with epilepsy they are not alone. Epilepsy Queensland brought Cassidy’s campaign to Australia in 2009 where it has since grown

Epilepsy Queensland Inc. was founded in 1969 and is the only state based organisation providing vital services and support to the 100,000 Queenslanders diagnosed with epilepsy.

Increasing awareness of epilepsy in the community and supporting people with epilepsy are the key goals for Epilepsy Queensland.

We strive to provide support, counselling, information, education, training and advocacy services to people with epilepsy and their families, schools, health professional as and disability services. www.epilepsyqueensland.com.au