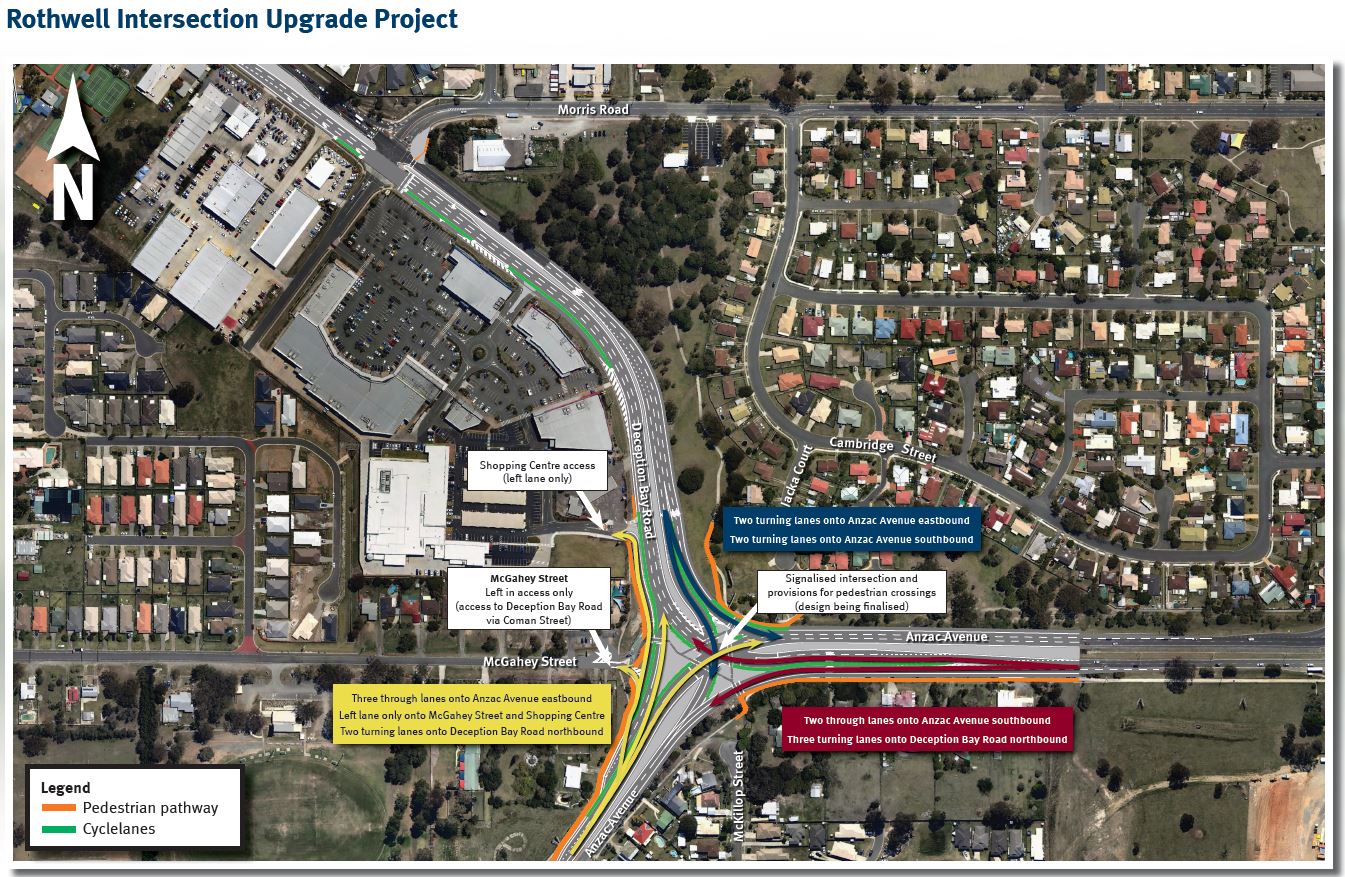 The $37.5 million upgrade, which began in mid-2016, was finished and open to traffic in November, delivering a safer and more efficient Moreton Bay road network.

The drone footage clearly shows continuous traffic flow through one of the busiest parts of the Redcliffe Peninsula.

“The Rothwell Intersection Upgrade has replaced the previous roundabout with a multi-lane signalised intersection, providing a safer and more efficient link between Anzac Avenue and Deception Bay Road and improving access to the new Rothwell station precinct,” Mr Fletcher said.

Queensland Minister for Transport and Main Roads Mark Bailey said the upgrade had been funded by the Australian and Queensland governments in partnership with Moreton Bay Regional Council.

“This is a fantastic example of the three levels of government working together to improve local road infrastructure, with the Queensland Government committing $22.6 million, the Australian Government $11.7 million and Moreton Bay Regional Council a further $3.2 million in funding,” Mr Bailey said.

Federal Member for Petrie Luke Howarth said since work began 16 months ago, close to 17,000 tonnes of asphalt had been laid while the intersection continued to cater for 40,000 vehicles daily.

“Construction began on the project in July 2016 and in October this year we saw a major project milestone achieved with the intersection starting to operate in its final alignment under new traffic signals,” Mr Howarth said.

“I fought long and hard for this intersection upgrade and I’m pleased this project has finally been delivered.”

Member for Murrumba Steven Miles said he was thrilled the intersection was helping local people get where they needed to be safer and more easily.

“This major project has ultimately improved the liveability of this part of South East Queensland, reducing travel time so locals can now spend less time travelling and more time doing what they enjoy,” he said.

Moreton Bay Regional Council Mayor Allan Sutherland said the inclusion of signalised pedestrian crossings and dedicated cycle lanes would make it easier for local residents to use active transport to reach their destinations.

“I was especially pleased to see access between McGahey Street and the intersection remain open, which is a positive outcome for residents and businesses in the local area,” Cr Sutherland said.

The Rothwell Intersection Upgrade forms part of the $1 billion Moreton Bay Rail Link project to which the Australian Government committed up to $595 million in partnership with the Queensland Government and Moreton Bay Regional Council.

Drone footage of traffic flow at the intersection can be viewed here: