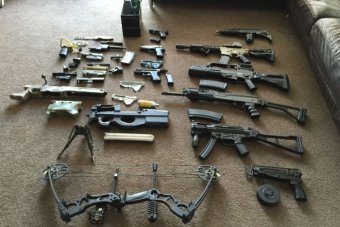 Police, Fire and Emergency Services Minister Mark Ryan and Acting Deputy Commissioner Bob Gee today viewed some of the 16,000 guns Queenslanders have handed in as part of the national gun amnesty.

Mr Ryan said the success of the amnesty showed Queenslanders were overwhelmingly firm in their backing of strict gun control to keep the community safe.

“The quantity of firearms surrendered has been very positive. It has shown Queenslanders want our state to be a safe place, and the Palaszczuk Government is committed to ensuring that is a reality,” he said.

“That is why I tabled a new regulation in Parliament this week to tighten weapons regulations and reiterate Queensland’s commitment to John Howard’s world-renowned National Firearms Agreement (NFA).

“The serious issue of gun control and community safety is an important debate that has again been given public prominence in the wake of last week’s deadly massacre in Las Vegas.

From July 1 to September 30, a total of 16,126 firearms were surrendered for registration, safekeeping or destruction.

Mr Ryan said the weapons regulation to limit access to high capacity lever action shotguns in the community illustrated the Government’s commitment to the NFA.

“Although the NFA was born out of Australia’s deadly Port Arthur massacre in 1996, it is every bit as important almost 20 years later, if not more so,” he said.

“The Palaszczuk Government has an added responsibility to ensure the safety of everyone who lives and visits our state in the lead up to the Gold Coast Commonwealth Games next year.”

Mr Ryan said he was disappointed that the LNP refused to take a strong stance on gun control to ensure community safety, with the LNP Member for Gympie breaking ranks to vote down the important weapons regulation.

“This important issue is about the safety of Queenslanders, not votes from Queenslanders and I am calling on everyone to cast politics aside.”

Acting Deputy Commissioner Gee said he was pleased with the response to the gun amnesty.

“This amnesty will help keep our community safe by ensuring those firearms don’t fall into the wrong hands,” Acting Deputy Commissioner Gee said.

“Any firearm in the wrong hands can have tragic consequences.”

A description of these categories can be found here: https://www.police.qld.gov.au/programs/weaponsLicensing/licenceapplication/weapons/categories/categories.htm

Breakdown of firearms registered/surrendered to QPS by policing region:

A map of these policing regions can be found here:

The number of firearms/surrendered at firearms dealers was 6234.

“Thank you to firearms dealers for their co-operation during the amnesty,” Acting Deputy Commissioner Gee said.

“Should any person within the community still possess an unregistered firearm they should make arrangements with their local police to surrender the firearm.”