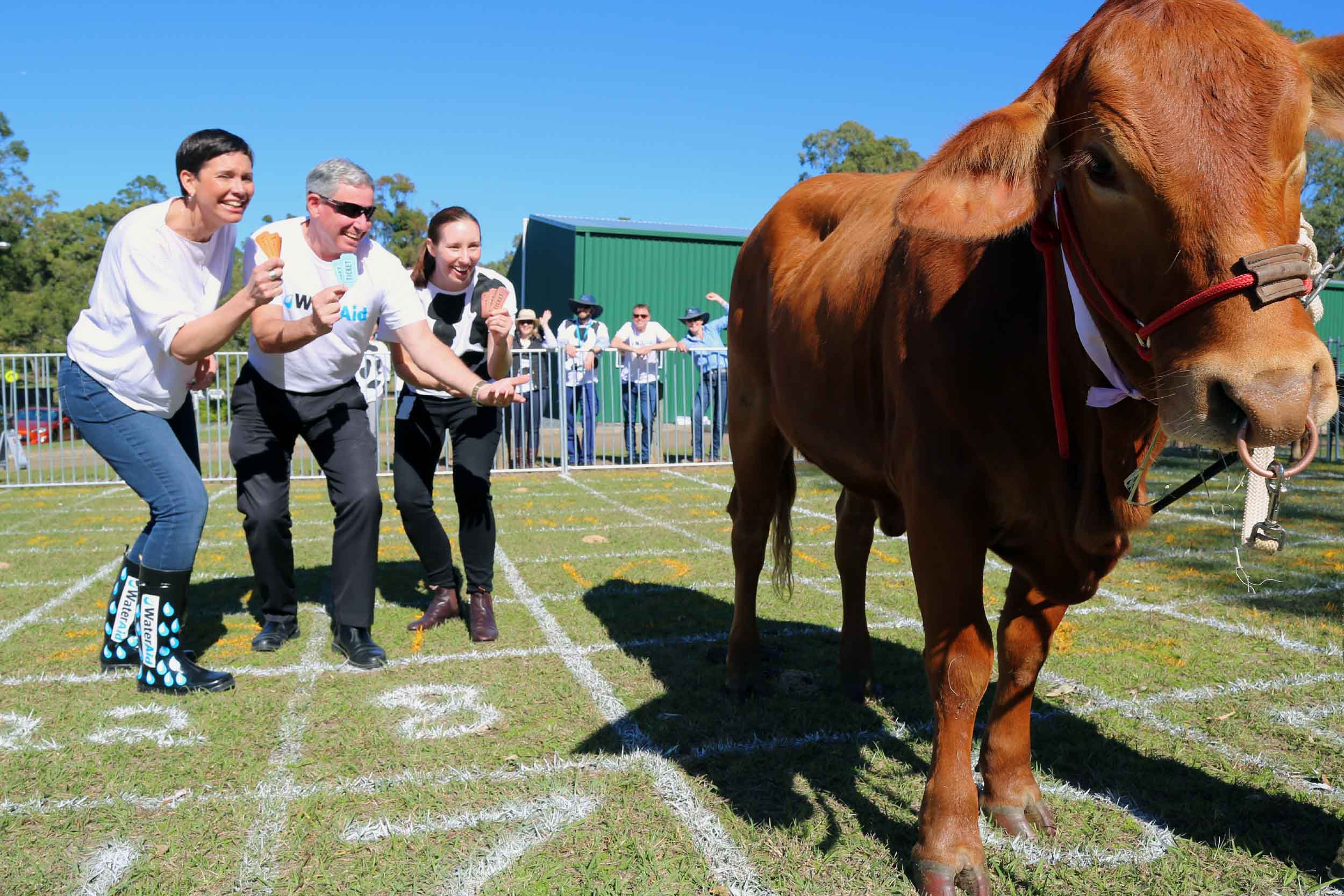 Who would have thought that cow poop could literally be worth its weight in gold?

A novel approach to fundraising has paid off for a team of water innovators at Seqwater, after they raised more than $15,000 to support WaterAid’s work in Nicaragua by holding a ‘cow poo lotto’.

The unique fundraising event is known by different names across the world – ‘cow pie bingo’, ‘the poop pool’ or even ‘dumping for dollars’.

The rules are simple: donors buy a square of land in a big field, a cow is then released into the grid and the square that the cow decides to do its business on is the winner.

One of the members of the Seqwater team behind the event Katie Jones said the money raised would be used to help solve a water supply crisis for a community in Nicaragua. “We took on this fundraising project as part of the WaterAid Water Innovators Program in which teams from around the world are challenged to solve real problems that exist in communities where WaterAid operates,” Ms Jones said. “This year’s challenge focused on Nicaragua.

It’s the second-poorest country in Latin America and is currently experiencing the worst water crisis it has seen in the past 50 years.” As part of the program, corporate teams have spent the past five months working together to devise solutions to the real-world challenges that WaterAid seeks to overcome; either in water, sanitation or hygiene. “As South East Queensland’s bulk water supplier, we took up the water challenge,” Ms Jones said. “We created a specially designed surface water intake that could be used in one of the most remote regions in Nicaragua where resources are very limited. “When you undertake a program like this it makes you realise just how precious water is and how lucky we are to have access to a safe, clean and reliable water supply in South East Queensland.”

Another component of the challenge was to turn $500 of seed funding into a profit of at least $5,000 to be donated to WaterAid. Through their Cow Poo Lotto campaign, the Seqwater team has already smashed the fundraising target, collecting more than $15,000 in funds.

The event took place this week, on a field located near Lake Samsonvale in Brisbane’s north. “We thought this event would be a fun way to raise money and awareness and are delighted by the success it’s had,” Ms Jones said. “Thank you to everyone who has generously donated to the Cow Poo Lotto or through our Everyday Hero page”.

WaterAid Australia Chief Executive Rosie Wheen was a special guest at the fundraising event and said she was thrilled by the innovative and fun way Seqwater chose to support WaterAid – and the millions of people in the world without access to clean water and proper sanitation.

“With all three, they can unlock their potential, break free from poverty, and change their lives for good. Children can grow up healthy and strong, women and men get to earn a living, whole communities start to thrive.”

Global water and sanitation crisis:
 An estimated 884 million people (10% of the world’s population) are without clean water.
 Nearly 2.3 billion people (around one in three) live without a decent toilet.
 289,000 children under five die every year from diarrhoeal diseases caused by dirty water and poor sanitation. That’s almost 800 children a day, or one child every two minutes.