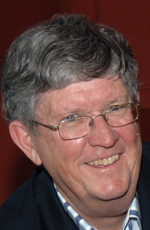 The Grapple team Exclusively chat with with Ian Head OAM Former editor of now defunct Rugby League Week about his close relationship with Rugby League, the highlights and even releases a never before admitted secret listen in to the podcast for that gem.

Some of Ian’s 40 books either as author or co-author include:

The Kangaroos: The Saga of Rugby League’s Great Tours (1994)

Straight Between The Posts: The Legendary Frank Hyde and His Stories  (1995)

Taylor Made: A Year in the Life of Australia’s Cricket Captain Mark Taylor (1995)

Nothing Great is Easy: the Des Renford story. 2000

Never Say Die. The Fight to Save The Rabbitohs.

With Spirit & Courage: the Extraordinary Life of Paul Featherstone. (2002). Paul Featherstone is Australia's most well-known Ambulance Paramedic who has been involved in rescue missions for the Mt Thredbo disaster, The Granville Train Disaster, The Bali Bombings, and The Beaconsfield Mine Rescue

The Golden Girl: Tributes in words and pictures to the legendary Betty Cuthbert. (2006)

And The Crowd Went Wild. Sporting Days that That Thrilled a Nation. (2010)

In his five decades covering sport, Ian thinks the story of the Western Division and the Amco Cup is the best football story he's come across.

The Amco Cup was a new rugby league competition that began in 1974. The Western Division, a team from country NSW, included miners, a farmer, a greyhound trainer, a policeman, and a brickie. Against all the odds, and expectations, the Western Division took home the Cup.

Ian is currently working on a book about the intriguing background of Balmain’s big upset win over the Rabbits in the 1969 Grand Final called The Great Grand Final Heist.

It will be released around July this year.