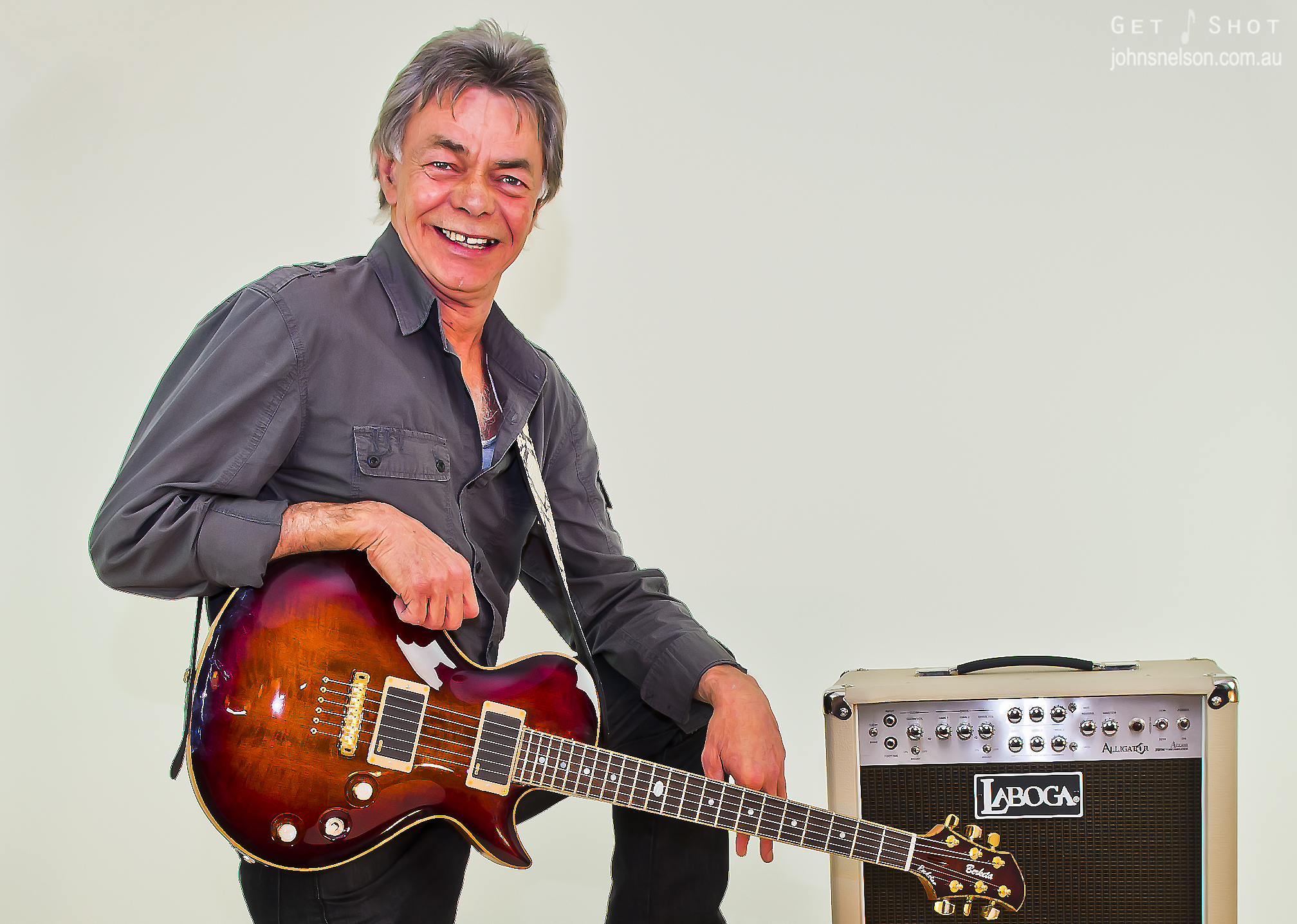 One phrase describes Phil Emmanuel 'Simply the best guitarist in Australia'. 101.5 FM was blessed to have him join Harriet on air

Phil Emmanuel is known as Australia’s Greatest Electric Guitar Player and has a resume of amazing performances with musical legends that any musical enthusiast would envy.

“Phil’s musical prowess is so astonishing that there are times when the man becomes the guitar and the guitar becomes the man. His passion is illuminating; his ability is breathtaking “While his brother Tommy plays it sweet; Phil plays it from the street” Glenn A. Baker

Whilst most kids were playing childhood games in their backyards, Phil was touring with his family band; at the age of nine he was already working as a professional musician in that band, variously named “The Emmanuel Quartet” also as The Midget Surfaries and The Trailblazers. Phil played lead and Tommy played rhythm guitar, along with their brother Chris on drums and their sister Virginia on slide guitar. The Emmanuel siblings earned the family’s sole income for several years. They travelled Australia for six years (1960 – 1966) playing their favourite tunes, this set the stage for the following years of Phil’s professional career.

After his father died, The Emmanuel family was approached by Australian country music star Buddy Williams, who took them on the road; until they were forced by the Australian child welfare department to stop travelling. The children were then sent to a regular school, though it could be said that no formal school could teach Phil what he had experienced whilst touring the country, he had already spent his informative years learning valuable lessons in “The School of Life” The Emmanuel’s first brush with fame came when The Trailblazers won two televised talent contests and were able to produce an album.

After completing his schooling, Phil returned to Sydney where he scored a gig at the Texas Tavern (Kings Cross) entertaining American servicemen, it’s there that he developed his love of American country music.

Phil’s musical roots stem back to the 50’s, 60’s and 70’s his style and preference has largely been defined by the classic guitar sounds of this era, the “instrumental tunes that defined the sound of the electric guitar when it was a new instrument” Phil’s influences include guitar great Hank B Marvin and The Shadows, the Ventures and the Beatles. Phil then turned his attention to the music of Al Di Meola, Carlos Santana, Steve Morse and Gary Moore and the much admired Jeff Beck. But It is Hank that Phil attributes the path he chose to take on his musical journey. Phil has said if it wasn’t for “Hank B. Marvin and The Shadows” I wouldn’t be the electric guitar player I am today. “When I first heard Hank play in 1959 I was fascinated and hooked by his sound and use of echo. To this day he is still my favourite guitarist”

If you were to ask Phil; who are some of his favorite performers that he has graced the stage alongside; he would rattle off a list that reads like a who’s who of the Music

Industry, artists such as John Jorgensen (Elton John, The Hellecasters), Will Ray, Bonnie Raitt, Duanne Eddy, James Burton, (Elvis Presley), Carlos Santana, the band “America”, The Ventures, and Eric Clapton, But it was truly a dream come true for Phil when he actually got to play with the Great Hank B Marvin himself.

Phil’s versatility is well known and acknowledged, by both musicians and fans alike, which becomes obvious from the reception he receives at all his shows, along with all the accolades from the musicians he has performed alongside, from Jazz – James Morrison, Don Burrows to Big-Band – Ed Wilson, the Royal Military College Band, to Country – Slim Dusty, Reg Lindsay, Lee Kernaghan, Dolly Parton, Willie Nelson Tammy Wynette, to Rock and Blues Dire Straits, The Shadows, Midnight Oil, Jimmy Barnes, Roy Buchanan, Don Walker, John Farnham and Ian Moss, and as the years go by the list continues to grow.

In 1991 he was the recipient of the Hands of Fame Award (A country music award) won previously by Slim Dusty, Ted Egan, Reg Lindsay and John Williamson to name a few.

The release of his first album “Kakadu Sunrise” in 1992 saw Phil pushed into the limelight as a result of nationwide media saturation.

Phil has toured Australia with Brother Tommy as “The Emmanuel’ Brothers” seeing them playing in every major city in Australia with sell out concerts every night. What followed was the rise and rise of the Emmanuel Brothers, with the long awaited Sony Records release of ‘Terra Firma” in 1995 which debuted on the Australian Music Charts at #13 Nationwide, and climbing to #6 in the July of that year. “Terra Firma” was the first ever album release by the two Emmanuel Brothers and celebrated 35 years of guitar playing. It not only earned an ARIA Nomination for Best Adult Contemporary, it was also nominated at The Tamworth Country Music Awards for Best Instrumental Album.

A highlight for Phil came in the year 2000 and saw him performing to a worldwide audience of 4.5 billion at the Closing Ceremony of the Sydney Olympics with Brother Tommy, INXS, Vanessa Amorosi, Savage Garden and Midnight Oil. It gave Australia’s “forgotten son” a chance to shine and also to receive the recognition that he undeniably deserves.

Also in 2000 Phil experienced another highlight with his second tour of Europe when Phil was invited to headline “Issenden” the worlds’ largest guitar festival. Following this he set off on a brief tour of Europe.

April and May of 2002 saw Phil in Italy, and Kuala Lumper where he performed with younger brother Tommy in a showcase event to literally thousands of fans.

2010 marked the 50th Anniversary of Phil and Brother Tommy’s musical careers, and as such, the fans finally got what they had been begging so long for “a reunion” Tommy and Phil embarked on a nationwide tour to celebrate their 5 decades of success.

In 2013 he played to packed houses in Singapore and received a rousing welcome and left with an invitation to please return soon.

Phil chose not to follow in his Brother Tommy’s footsteps and pack up his guitar and take his talent overseas to further his career, choosing instead to stay in his country of birth. But Phil’s popularity with overseas audiences and the accolades he receives when he does work over there; should leave little doubt as to the great success he could have achieved had that been his decision, and by now he would have acclaimed status as a guitar Demi-God. But Phil loves his country and while it is thrilling when he does get to play in Europe he is well and truly entrenched in the Aussie music scene, and has earned his rightful place in Australian music history “Let’s pay the man his dues” and continue supporting his career, after all Musicians of his calibre don’t come around every day; so it’s important that we revere them while we can.

As well as performing his renowned Solo Shows, Phil and his band play a wide range of guitar oriented music ranging from his own interpretation of “Chariots Of Fire” to “Santana’s Black Magic Woman” But such is his versatility, he transcends genres, “Bach to the Beatles and everything in between” He can have you tapping your feet to a Irish jig, then in the next moment stun you into silent wonder as he plays the classical piece “Nessun Dorma” Phil continues to tackle a lot of pieces most guitarist anywhere in the world would not even attempt.

Phil has always been renowned for performing powerful, challenging material, ranging from classical ballads to spine-tingling, amazingly fast and furious pieces by Bach and Mozart. Phil’s playing has so much fire, and his chops on the electric are as good as you’ll get. This gifted self -taught musicians keen ear is always listening out for the next challenging music piece that he can adapt and put his personal spin on, “nothing is off limits” if it sounds melodic he will tackle it, if it has strings he will play it, such is his love and passion for music that “He lives and breathes riffs”

“His phenomenal technical skills thrill audiences. His fingers look like a demented spider running up and down an electric/acoustic web of intricate frets and passages. His ability has earned him the nickname “The Wiz” Like a wizard he conjures up his magic and keeps you spellbound and has you asking at the end “How does he do that?” Phil also wears the title of “Blade Master” Phil has many guitars and he is never far away from one at any time, and like any good servants; when the Master commands those guitars obey and work their strings off, “all for the price of a song”.

Phil is currently putting the final touches to his latest album, and has a number of exciting new projects to look out for. Phil also runs his very popular Master Classes

from time to time, where he passes on his experiences to the up and coming hopefuls who can only ever dream of being that good. He is very generous with his time for his fans and fellow musicians alike, and is the first to put up his hand to perform for a worthwhile cause. Phil is just an all-round good bloke! “Who just happens to play a mean guitar” The humility of the man belies the extent of his greatness. Ask Phil about his natural talent and the answer is likely to be “Anyone can do it” there are many who would disagree as they tirelessly practice chords; knowing full well that they will never achieve what this humble guitar man has.

After almost 50 years of hard work, Phil Emmanuel deserves to receive Australian and worldwide recognition as one of our finest musical talents, and still after all these years Phil loves the job he was destined to do, and hopefully he will continue to enthral audiences worldwide for a long time to come.

Phil will be appearing at a venue near you soon enough, keep a lookout on the gig guide and Go See Him! Believe the hype – this man has to be seen and heard to be believed. “Be prepared to be amazed” and also to have a cracking good time, Phil is infectious and loads of fun, with a dry wit which is almost as quick as his fingers.

But in the meantime why not visit his Web Page Store and download your very own Phil Emmanuel album. Thanks for visiting and browsing, come back often for updates & news on new music & future projects.