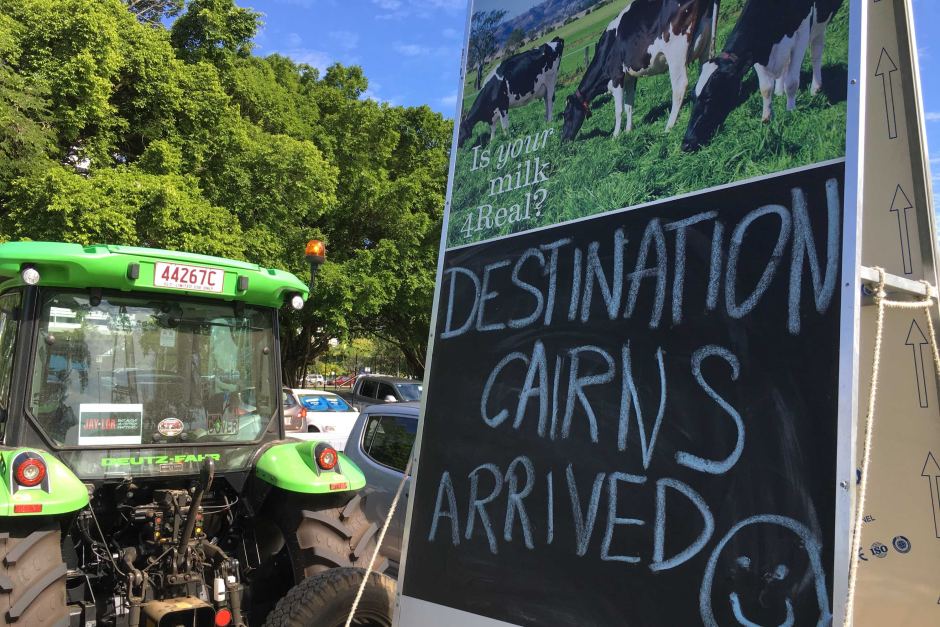 Greg Dennis drove his 20-year-old, bright green tractor and trailer up the Queensland coast — from Brisbane to Cairns — in 17 days.

Mr Dennis's long journey was all to raise awareness of the impact of $1 per litre milk on farmers.

"Consumers can play a role in helping farmers and their profitability, we have to see farmers remain profitable into the future," he said.

"After all we are trying to grow food for the people — it's almost a community service — but we have to able to do that at a level where we can run a business," Mr Dennis said.

The trip, which aimed to get people talking about the issue, came with its sacrifices: comfort.

Mr Dennis conceded, a tractor cabin was not necessarily designed for long-distance travel.

"It has got a comfortable seat and it is air-conditioned and I've been playing tunes off my phone through the stereo," he said.

Country music duo Brooks and Dunn were the musicians of choice along the way and, perhaps ironically, the duo's most recent album from 2009 features songs such as That Ain't No Way To Go and Long Time Gone.

He said the slow trip was well received by other motorists, who Mr Dennis did not expect to be as keen on the idea of someone driving up the Bruce Highway for stretches at 30 kilometres per hour.

"I was quite apprehensive just a few days out from the trip and asking myself if I was being stupid. But I've got to be honest, the traffic on the road have been pretty respectful," he said.

Mr Dennis or "Farmer Gregie" as he prefers, chose to end the trip west of Cairns on the Atherton Tablelands, a place he said had seen the dairy farmers struggle with deregulation and cheap milk prices.

"The Atherton Tablelands was one of Australia's strongest dairy regions. They've dropped from about 220 farmers down to I think under 50 today and that's all happened in the last 15 years," he said.

In 2011, several major supermarkets reduced the price of milk to $1 per litre — initially pleasing consumers, but meaning dairy farmers were making, in many cases, no profit.

Greg Dennis and his big, green tractor in Cairns after driving 2000 kilometres (By Phil Staley)

Mr Dennis hoped his journey inspired consumers to forego $1 per litre milk, but thought there needed to be a legislative change to ban the cheap price for the problem to be solved.

"I guess in a perfect world, if I continue to draw enough attention to this issue, legislation might follow but we can't wait for that," he said.

Driving a tractor up the highway surprisingly economical

Farmer Gregie said the economy of the trip was surprisingly good and he did not need to change the tires at all.

"Our dealership at home turned the tires around before I hit the road and you can still read some of the writing on the tread," he said.

"As for the fuel bill, I pulled in at one point and fuelled up and this fellow came up and asked me how the tractor went on fuel and I said, I think 'I'm getting nearly 600 kilometres out of a tank'.

"The other bloke said, 'bloody hell that's better than my Land Cruiser'," he said.