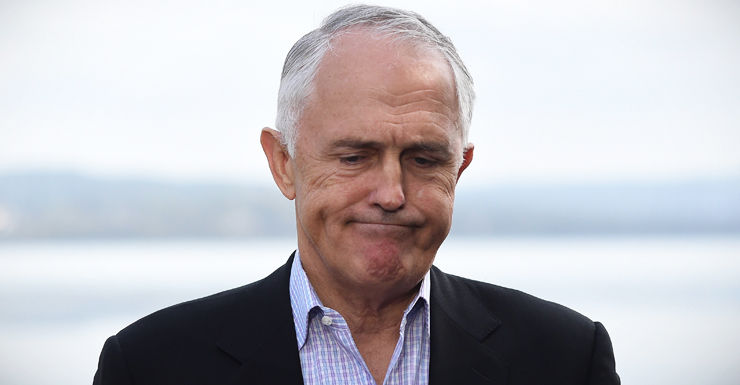 Time is running out for Malcolm Turnbull

After the federal election failed to eventuate according to Malcolm Turnbull’s plan, this past week proved to be yet another unexpected period for the Prime Minister.

And not in a good way.

The week started with the resignation of Brian Martin, the man Mr Turnbull picked to head the inquiry into the NT’s youth detention system.

The former Supreme Court judge pulled up stumps less than a week after being appointed by the PM, concerned that he did not have the confidence of sections of the NT’s Indigenous communities.

The whole affair left voters with the impression that Mr Turnbull could no more make a sound decision than he can resist tweeting every time he catches public transport.

Take this to the bank and cash it

The banks must have thought they were being nimble when they avoided passing on the full interest rate cut delivered by the Reserve Bank this week.

This was a gutsy move, given the banks reportedly refrained from donating to either of the big parties during the federal election.

Having managed to aggravate both sides, the banks’ decision to express their inner Scrooge demonstrated yet again the lack of political nous for which the top end of town is renowned.

Then again, perhaps the Big Four had the true measure of our banker-turned-PM all along. They must have chuckled at the feather duster treatment handed down by Mr Turnbull after they refused to pass on the interest rate cut.

They may even have laughed aloud when the PM announced they would be hauled before a parliamentary committee on a yearly basis to be given a stern talking-to.

Mr Turnbull may think he’s managed to placate voters who are angry with the banks, but the PM’s refusal to take on the Big Four over the interest rate cut will not be forgotten.

Similar long memories reside in the minds of three senators whose re-election was announced this week.

Jacquie Lambie, Bob Day and David Leyonhjelm have all been returned, in the case of the latter two, they have Malcolm Turnbull to thank for his double dissolution.

The PM needs nine of the 11 crossbench senators to side with him if he’s to pass government legislation, and will therefore need the support of least one of this trio.

Mr Turnbull may find it humbling indeed to go cap in hand to them, given he called the DD predominantly to clear such rogues out of the upper house.

The final indignity of the week was delivered to the PM by someone who has already been cleared out of the parliament but has a habit of hanging around.

As we wrote last week, Mr Turnbull made the right decision by refusing to nominate former PM Kevin Rudd for the top job at the United Nations.

Right on cue, Mr Rudd proved his unsuitability by throwing a week-long hissy fit that culminated in an exclusive interview with the former PM’s nemesis, The Australian newspaper.

However, much more concerning for Mr Turnbull was the leak from his freshly-minted cabinet on the issue.

Without knowing who did the deed, we can only consider who benefited from the leaked information.

On this occasion, given the leak refuted Mr Turnbull’s claim the cabinet had voted against nominating Mr Rudd and defended Foreign Minister Julie Bishop, it would be fair to assume it came from Bishop supporters.

Just how many Bishop fan are in the cabinet these days is hard to determine.

But if Malcolm Turnbull now has to contend with them as well as the Abbott supporters causing trouble in the cabinet, his barely-returned government is going to look very messy, very fast.

The PM has until the end of this year to turn things around.