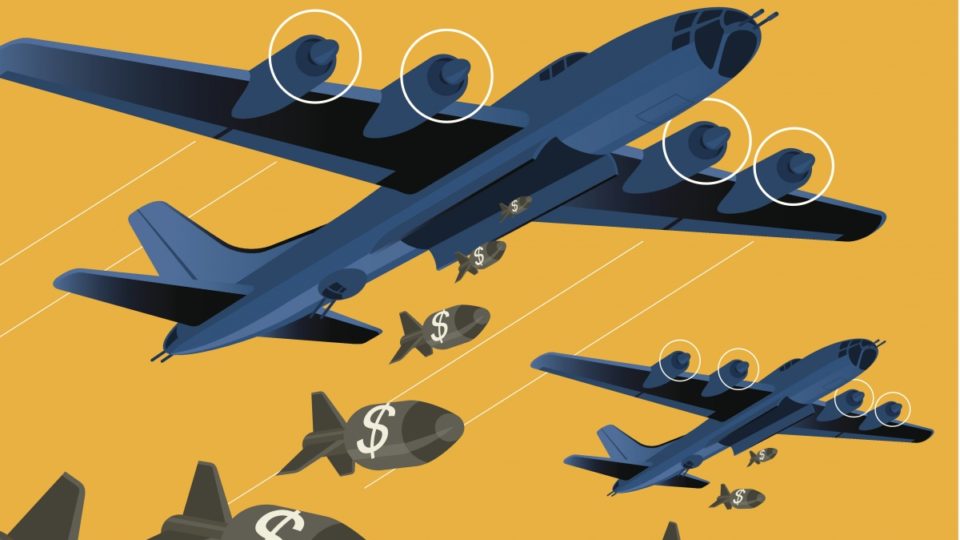 The truth behind the ‘currency wars’

The Aussie dollar is stubbornly holding its ground despite the RBA’s rate cut, which Australian consumers might interpret as good news, but probably shouldn’t.

The Reserve Bank dropped the official cash rate by 25 basis points to 1.5 per cent on Tuesday, but the Australian dollar barely budged from around 76 US cents on Tuesday, Wednesday and Thursday – and then jumped up even higher to 0.7630 USD and 0.5810 GBP when the Bank of England cut its rate on Thursday night.

Consumers might rejoice at this news. Think of the Netflix subscriptions, Ebay bargains and overseas holidays!

But a sobering possible explanation is that the Aussie dollar is at its current level because we are losing a ‘global currency war‘. The theory goes that central banks in major economies across the world are slashing rates (like the UK’s cut to 0.25 per cent) with the aim of devaluing their currencies to claw back economic growth at the expense of others.

A leading economist, OECD advisor Dr Adrian Blundell-Wignall, endorsed this view to the ABC on Thursday: “It’s basically like the trenches, like you put your head up above the trench you’ll get a big exchange rate appreciation if you put it up too far.”

“The actions of certain monetary authorities overseas could be interpreted in that light – competitive devaluation. But, in terms of our national interest, engaging in that sort of behaviour, and even in that kind of narrative, is just not productive,” Mr Anthony told The New Daily.

“Larger economies and their monetary authorities have more bearing on outcomes than ours do. And that’s just a reality and always was.”

There is good news, though. Even if a so-called currency war is raging, we can still be winners.

The Aussie dollar is high, right? Compared to a low of around 67 cents in January, it sure seems like it. Cue the Netflix argument.

The trade weighted index, which compares the AUD against the currencies of its most important trading partners (including the US), tells a similar story.

But Mr Anthony said we need some historical perspective: “I don’t describe the current level as strong. I describe it as significantly lower than where we were 18 months to two years ago.”

Back in July 2011, at the peak of the mining boom, one Aussie dollar was buying $US1.10. It was the perfect time to buy iPhones or go sightseeing in the Rocky Mountains.

So we’re worse off? Not quite.

Relief may be on the way

Mr Anthony predicted the AUD will fall even further, to around 65 US cents in the next two to three years, and that we should celebrate if this happens.

Why? Because the end of the mining boom means we depend heavily on other parts of the economy that are aided by a cheap dollar.

“For Australia’s hardworking manufacturers, farmers, tourism sector, exporters, for our advanced scientific community, I think this would be a great thing,” Mr Anthony said.

Dr Timo Henckel, an economist at the Australian National University, cautioned consumers against placing too much emphasis on the fluctuations of the currency market, as they are hard to predict and even harder to interpret. But he also warned that a “very narrow” focus on the benefits of a higher AUD is too simplistic.

“Someone who is focussing on a very narrow consumption basket, which includes a lot of imported goods, then sure, you’d want a strong Australian dollar. But it’s not that simple,” Dr Henckel said.

“It typically has other ramifications, namely in making exports dearer and therefore less desirable from the point of view of the rest of the world.”

But those Australians who do take the ‘Netflix and holidays’ view of the dollar can take comfort in the contrarian view of UNSW economist Prof Richard Holding. He told The New Daily a lower AUD would indeed help our exporters, but said he was “less certain” the benefits would be as extensive as “20 years ago” because Australia is increasingly reliant on imports priced at US dollars, such as computers and tech services.