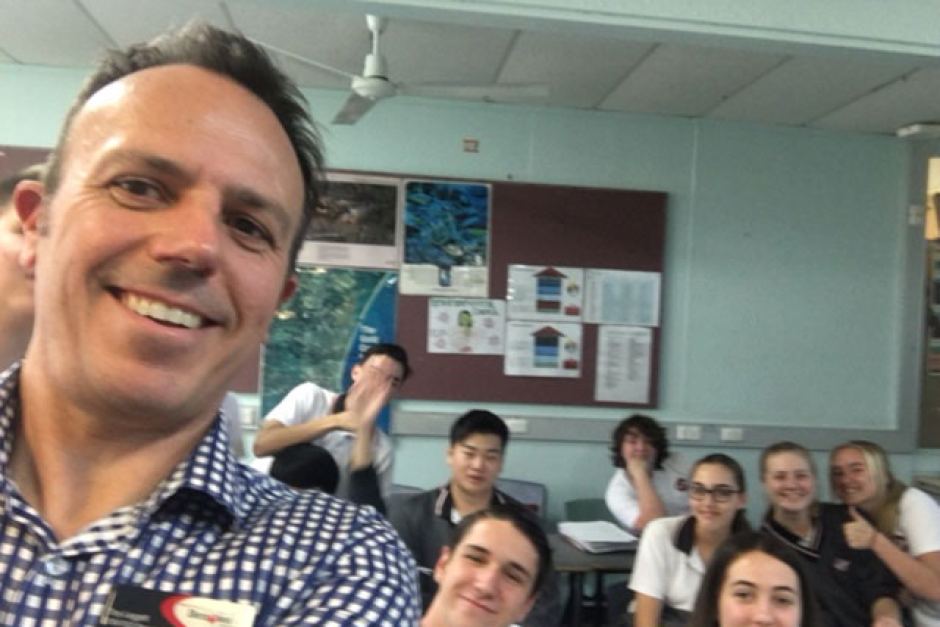 From marine biologists to dietitians, a growing number of professionals are ditching their jobs to take up teaching in what is being called the 'big switch'.

The move comes at a critical time, as they will soon be stepping up to fill a looming shortfall in educators, as an ageing workforce in Queensland starts to retire from 2019.

Ms Oliver agrees it is a tough task taking on a new profession like teaching. (ABC News: Lexy Hamilton-Smith)

Among the 2,000 students at Benowa State High School on the Gold Coast is a Teacher's School of Excellence that is re-skilling "high flyers".

Student teacher Karen Oliver, 35, was a civil engineer who had had enough of wearing hard hats out in the field.

"Being able to say I was an engineer really makes them (the students) pay attention," she said.

"And I like the fact I can share that with the kids as they decide what they want to do with their lives."

In the classroom next door is dietitian Troy Leggett.

At 47, Mr Leggett is taking on his second chemistry class of Year 11s.

Being at the top of the tree in one profession does not mean teaching teenagers is easy.

Ms Oliver laughed as she agreed it was a tough task taking on a new profession like teaching as a late bloomer.

"It is very daunting to be in charge of a room of teenagers — just scary," she said.

"These guys have had some corners knocked off," he said.

"They've tended to build some resilience. [They feel] 'I've been doing something for 10 years, I have a family now, I want to be a teacher', so they tend to be very focused and make great teachers."

He said the jobs were certainly out there as well.

"We are actually heading into a bit of a teacher shortage from about 2019 onward because of the ageing profession," he said.

"There already is in the senior science and maths field, and in regional Queensland, but that will actually spread more broadly."

'It was groundhog day'

Associate Professor Geelan said 100 per cent of teacher graduates at Benowa had found jobs over the last five years.

It currently takes one year to re-school into teaching, but from 2018, graduates will have to complete a two-year Masters.

At nearby Merrimac High School, a one-time stand up comic is teaching maths.

Kyle Anstee turned his back on a his job as a civil engineer and loves teaching. (ABC News: Lexy Hamilton-Smith)

Kyle Anstee, 31, is two years out after turning his back on his "real" job as a civil engineer.

"Same day over — it was groundhog day," he said.

"I could not see myself being able to survive that for 40-odd years."

He said he loved teaching and that the best thing was: "They laugh at my jokes and I don't get bottles of beer thrown at me".

Geetika Sodhi, 25, a former dental technician, is another who is flourishing in her second career.

"It is definitely hard — I probably would have been an F from when I started — I would probably be a B+ right now," she said.

"I have many things to improve on, but I am doing that every day and every year — I hope to be an excellent teacher."

Associate Professor David Geelan has challenged unhappy professionals to take up the challenge.

"Five per cent is knowing the content and getting it across and 95 per cent is connecting with human beings, teenagers, lots of them — all at once," he said.

"But not everyone is cut out to be a teacher."

He said the attrition rate from the profession was relatively high, around 40 per cent in the first five years.

But this new breed of graduates is raising the bar — one class at a time.