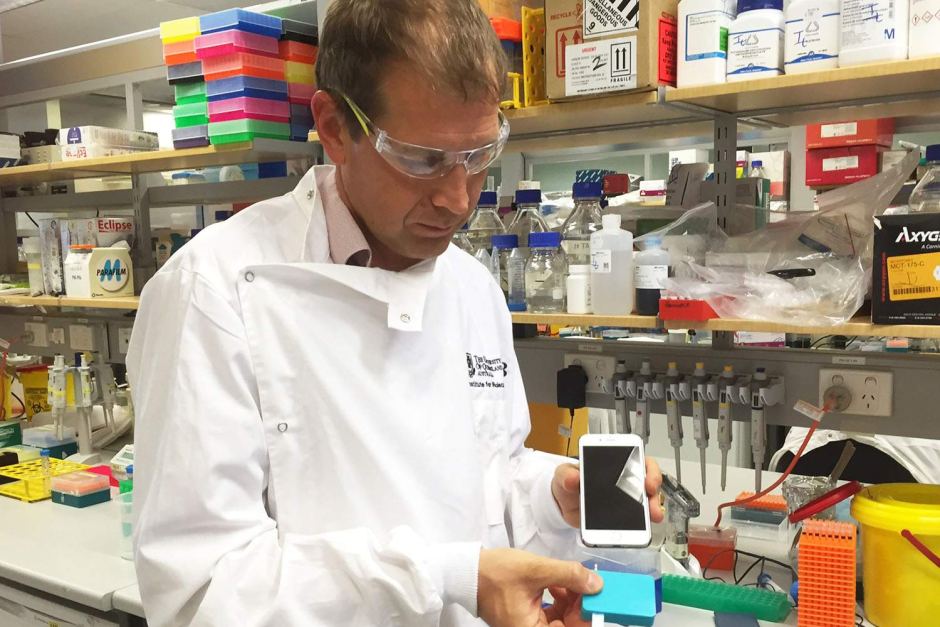 A diagnostic tool that attaches to a mobile phone will replace the role of a GP, and one day even specialised doctors, according to the Brisbane-based scientist who developed it.

To create the device, he re-engineered the existing technology behind simple blood glucose monitors used to monitor diabetes.

From this, Professor Alexandrov developed a biosensor that could track other serious diseases such as HIV, Zika virus or influenza through a DNA swab.

Professor Alexandrov and his team recently won a grant from the Bill and Melinda Gates Foundation to further develop the technology.

He said patients simply placed a blood or saliva sample onto a stick-like sensor then inserted it into a small electronic device that was then inserted into a mobile phone to read the diagnosis.

"The extreme would be the outbreaks of something like Ebola, where you have to make a decision to quarantine areas and you have to do it very rapidly because it spreads," he said.

"You are in an area with no infrastructure and you want to know in which direction it (the disease) is going. Is it mutating? How is it mutating?

"If we have this technology, our way of controlling this spread and management of infectious diseases would change."

Biosensor 'crying out' to be available

Professor Alexandrov said the device could also be used to monitor stress levels and more common illnesses, and had direct implications for diagnostics in a progressively electronic world where health costs were unsustainable.

He said this would enable accurate self-diagnosis and replace the role of a GP.

"We want to have all our records of diagnosis in the cloud and hope it will have algorithms that one day will replace at least GPs, if not specialised doctors," he said.

"It will work - the question is whether it will completely displace the laboratory test it will become.

"We will all be diagnosing ourselves on our cell phones, and the GP will only be an algorithm which you buy at an app store, or it will be a diagnostic aid to a GP and be used in certain situations."

Fellow researcher Dr Wayne Johnston said the biosensor was technology that had been "crying out for ages" to be available.

"(It is) saving time and money, but also decentralising the kind of power over testing and making systems that can work basically out in the community, not just in hospitals," Dr Johnston said.

"It's got to be quite an improvement to have good tests that are really easy to transport and really easy to use, and can be used in whatever way works best for whoever's on the ground working on these problems."