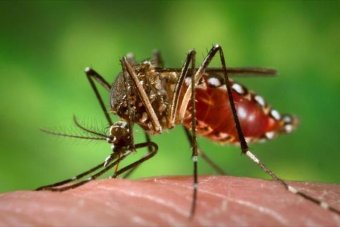 Queensland scientists have found a potential cure for malaria by developing a synthetic protein that they used to eradicate the mosquito-borne disease in mice.

The protein that the scientists at the QIMR Berghofer Medical Research Institute developed was a synthetic version of the PD-L2 protein found on the surface of human immune cells.

The director of QIMR's molecular immunology laboratory, Dr Michelle Wykes, said what they found was astonishing.

"Not only does it cure that infection, but then when you wait five months and infection has cleared and everything is calm, you re-infect the mice, you don't give them any more protein, and they're completely protected, they just don't develop any infection," she said.

Dr Wykes' team discovered PD-L2 proteins were responsible for telling the immune system to attack an infection, but malaria drastically lowered PD-L2 levels, leaving the body defenceless against the disease.

They found mice infected with malaria were cured after being given three doses of synthetic PD-L2, and also protected from re-infection.

"I think the excitement is not only did they not develop a serious disease, they didn't even show parasitaemia [presence of parasites] in their blood," Dr Wykes said.

"This is how great that protection is — it's unprecedented."

The World Health Organisation (WHO) estimates malaria killed an estimated 438,000 people last year, many of them children.

Dr Wykes said drug resistance was becoming a major problem with conventional anti-malarial drugs, but this treatment would stimulate a person's own immune system to destroy the parasite.

"I would like to think of this as training the immune system to remember the infection and clear it," she said.

More research needed before human trials can go ahead

Dr Wykes said it had taken a long time to get to this point, but further work was needed before human trials could proceed.

"Seven years ago, we were confused — I remember doing the first experiment thinking what does this mean?

"So it's really good to end on such a high note — knowing what it means, discovering a new role for such an important molecule, and finding a way to use that finding into looking into how we might cure the disease in humans."

The findings have been published in the journal Immunity.