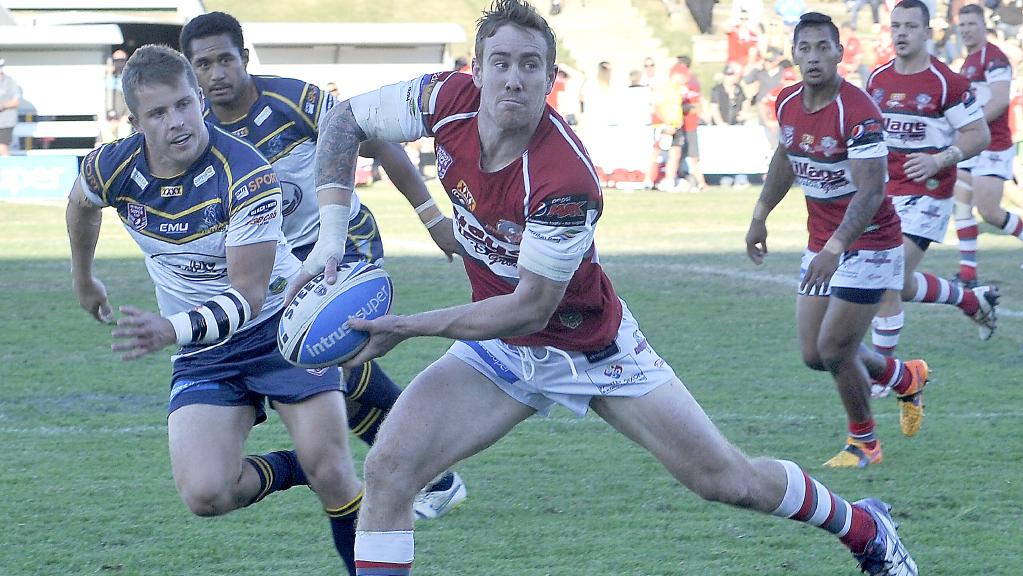 THE minor premiership is well within the sights of the Redcliffe Dolphins after a dominant performance against the Norths Devils put Adam Mogg’s side just one point behind Burleigh after Round 21 of the Intrust Super Cup.

Ipswich’s title defence once again hangs by a thread after a loss to the PNG Hunters, the Sunshine Coast Falcons jumped into sixth spot with Wynnum Manly right behind them after a win over old rivals, Tweed Heads.

NORTHS coach Mark Gliddon admits he is feeling the pressure as the struggling Devils come to terms with another failed finals push.

Handed the coaching reins in 2014 following the departure of Andrew Wynyard, Gliddon’s three-season tenure at Bishop Park has been plagued by inconsistency.

Languishing in second-last on the Intrust Super Cup ladder, the Devils will miss the playoffs for the fourth year in succession after failing to build on a promising start that yielded three wins and a draw from the opening six rounds.

They were handed their 13th defeat of the year in a 60-16 thrashing away to Redcliffe on Sunday, taking Gliddon’s overall record with the club to 22 wins, three draws and 42 losses at a winning percentage of 32.83.

Injuries have rocked the club, but Gliddon concedes he is under the pump.

“The positive for me is (chief executive) Jamie Dowse and his board of directors have reappointed me (for 2017). They’ve been really loyal to me. They’re looking at the big picture and they want that stability.

“Without making excuses, we’ve got a lot of injuries. We played PNG five weeks ago and we beat them but we had six changes the following week (because of injury).

“I believe we’ve got the nucleus of a good side. I don’t think we’re that far off the mark.

“We do need to sign a few middle players and that’s what we’re going after. We need that experienced front rower and they’re not easy to get.”

Gliddon said he would use his side’s three remaining fixtures to begin preparations for 2017.

“Blokes are playing for contracts and they’ve been told that. We realise that we can’t make the finals now but we can be a pain in the arse for other sides.

“We’re hanging in there. The morale is pretty good, everyone is working in the same direction.”

The Devils opened the scoring in the fourth minute at Dolphin Oval through backrower David Faamita, before Redcliffe hit back through Charlie Faingaa four minutes later.

A 21st-minute Shaun Carney try restored Norths’ lead, but a Sam Anderson double and another try from former Devil Darren Nicholls handed the Dolphins a 24-12 halftime.

Redcliffe then piled on five-straight tries after the break, with Daniel Randall, Faingaa, Christian Hazard and Zach Strasser (two) all finding the line.

A late Rogan Dean four-pointer temporarily stopped the rot, before Johnnie Fox put the exclamation mark on a dominant Dolphins display with his side’s final try just before fulltime.

The Devils will host Wynnum Manly at 3pm on Sunday, while Redcliffe travels to Easts at 1.40pm.

IPSWICH’S Intrust Super Cup finals hopes are again hanging by a thread after a brave but unsuccessful outing against PNG in Kokopo on Saturday.

Already two points outside the top six heading into the round 21 clash, the Jets slipped further off the playoff pace with a heartbreaking 18-16 defeat.

The defending premiers looked like leaving PNG with a valuable point with scores locked at 16-16 in the 76th minute, before an Ase Boas penalty goal drove a dagger through Ipswich hearts.

The sides exchanged tries in a frantic opening half-hour, with Adex Wera crossing for the hosts in the 20th minute before Fakahoko Teutau hit back for the Jets five minutes later.

The teams were again locked when Bland Abavu scored early in the second half, before Boas and Lipp kicked penalty goals to take the score to 16-16 heading into the final 15 minutes.

The Jets have a bye this weekend, before hosting Redcliffe on August 13.

SOUTHS Logan’s stay in the Intrust Super Cup top six turned out to be a short one after Sunshine Coast handed them a 48-12 loss on Sunday.

Battling a host of injuries to forwards and key playmaker Sam Scarlett, the Magpies were uncharacteristically poor in defence as they allowed the Falcons in for three tries in the opening 17 minutes.

Joe Stimson added a fourth try in the 29th minute for the Falcons before Dan Tamou put the Magpies on the board when he crossed three minutes later to send the Magpies to the sheds down 18-6.

Souths Logan’s hopes of a second half comeback were all but extinguished within the opening minutes of the second half when Ryley Jacks, Curtis Scott and Eddie Tautali each scored to put the Falcons out of sight.

Nikau Taukiri Te Rupe gave the hosts a glimmer of hope when he continued his strong try scoring run in the 57th minute but Scott and Stimson each bagged a brace as the Falcons racked up the points.

The result saw Sunshine Coast leapfrog the Magpies into the sixth and last finals spot. Souths Logan will look to turn things around against the CQ Capras this weekend in what will be skipper Phil Dennis’ 200th appearance for the club.

The 32-year-old will become the first player since the Souths-Logan merge to make 200 appearances for the club.

THE Wynnum Manly Seagulls overcame a poor start to score four tries in the second half to beat Tweed Heads and keep their finals hopes well and truly alive.

With the Sunshine Coast Falcons beating the Souths Logan Magpies, the Seagulls needed a win to sit just one point out of the top six and they did not disappoint in front of their home fans.

But Tweed Heads started strongly through a try to Jason Clarke in the fourth minute before the home side responded with two tries from Daniel Wallace and Daniel Ogden to hold a 12-8 lead at the main break.

From there, it was all Wynnum Manly as utility John Te Reo scored his first try in the Intrust Super Cup for 2016 with Mitchell Cronin, Pat Templeman and Nicholas Harrold all crossing the line for the green, red and white.

Brian Kelly scored a late consolation try for Tweed Heads but Wynnum Manly finished with the two points to trail the Falcons by just one point.