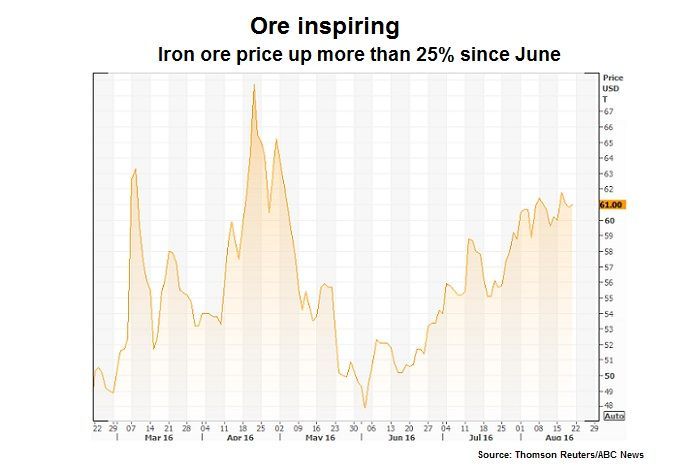 The local market looks like it will be enduring a pretty uninspiring opening this week as global markets ran out of puff and Wall Street reversed on Friday with another bout of anxiety over interest rates heading up this year.

While global equity markets were flat to negative last week — the exception being China's 2 per cent gain — commodities are where the action is.

Oil's surge paused on Friday but it is still up almost 25 per cent in the past two weeks, propelling it into bull territory after being in bear market earlier this month, while iron ore pushed higher again to be up more than 25 per cent since the start of June.

It is the busiest — and pretty well last — week of the August reporting season with around 90 per cent of companies listed on the ASX expected to have tabled their results by Friday.

Looking at stocks in its research universe, Citi's quantitative research team's scoreboard has earnings downgrades well ahead of upgrades.

So far 23 per cent of companies — including the blue-chips AGL, AMP, BHP Billiton, Rio Tinto, Newcrest and QBE — have had their prospective earnings per share (EPS) downgraded.

Citi has upgraded the EPS of just 13 per cent of companies — including Ansell, JB Hi FI, Whitehaven Coal and the infrastructure plays Sydney Airports and Transurban — while 66 per cent see no change to their earnings outlook.

However, AMP Capital's Shane Oliver has noticed an improved in tone in results over the last week.

"While there was no real surprise from BHP's profit slump there have been some excellent results from stocks like JB Hi-Fi and Treasury Wine Estates," Dr Oliver said.

He said several key themes have emerged in the past three weeks.

These include improving conditions for resources companies following a stabilisation in commodity prices, constrained revenue growth for industrials, ongoing cost cutting, headwinds for the banks and companies continuing to shovel dividends at their shareholders.

Australian dividends relative to a year ago. (Supplied: AMP Capital)

"So far 51 per cent of companies have reported with 46 per cent exceeding expectations, which is around the norm," Dr Oliver said.

The highlight of the week will be the supermarket heavyweights slugging it out again.

As with the previous rounds — annual, interim and quarterly — over a number of years, the badly beaten up Woolworths (Thursday) looks like it will struggle to land a blow on Wesfarmers (Wednesday).

In fact Woolworths is likely to be floored by a massive hit it has inflicted on itself.

Credit Suisse analysts are expecting a restructuring charge of $960 million to pop up in the books and coupled with the Masters Home Improvement business being treated as a discontinued operation, total impairments could hit $2.7 billion.

That would obliterate the expected underlying earnings of $1.6 billion and leave Woolies with a statutory loss of around $1 billion.

Massive impairments make for great headlines, but it is the underlying earnings that are the big problem into the future as competitive new entrants such as Aldi pound both Woolworths and Coles.

The big two supermarkets have flagged accelerating in price deflation in the fourth quarter, while category sales growth is a decade low of just 0.7 per cent.

Even on the one metric that Woolies has managed to score points — namely margins — Wesfarmers' champion Coles looks set to report a stronger number for first time in 15 years, according to Morgan Stanley analyst Thomas Kierath.

Mr Kierath noted executives' outlook commentary on food inflation and potential discounting are likely to be key share prices drivers for both Woolworths and Wesfarmers.

"Both shares are factoring maintenance of current margins which likely proves too optimistic, in our view," he said.

The market will also be looking for commentary from new Woolworths chief executive Brad Banducci about the contrasting dynamics of the need to cut costs against the underinvestment that has been evident in stores over recent years.

For Wesfarmers the big question is whether it can continue to pay out around 98 per cent of earnings and not risk a credit downgrade.

Investors would be advised not to think about banking another $2 dividend just yet.

Qantas soaring with a $1.5b profit

Qantas should confirm it has completed one of the more extraordinary turnarounds in recent memory with a full year $1.5 billion profit expected to be announced on Wednesday.

While Qantas has suffered some earnings downgrades from brokers recently, the US giant Morgan Stanley has a very positive view and found the Flying Kangaroo was the second-cheapest airline (by share price valuation) in its global coverage.

Recent negative earnings momentum perhaps does not auger well for Qantas, but Morgan Stanley said a $500 million share buyback may sweeten the result for investors.

Unlike corporate world, the macro week is decidedly quiet.

On the local front construction work done for the June quarter is the only significant item (Wednesday) and the first chunk of data — or "partial" — to be plugged into the GDP number in a fortnight's time.

As NAB's David de Garis notes construction work has been negative in all but two of the past 13 quarters since major project resource construction peaked at the end of 2012.

"While spending can be very lumpy from quarter to quarter, the commissioning of the three Queensland LNG plants this year is likely to have seen project engineering construction spending decline further," Mr de Garis said.

However, dwelling construction which has been rising for the past couple of years may offset the resources shut-down, with NAB agreeing with the consensus view that construction work will drop another 2 per cent after falling 2.6 per cent in the first quarter.

On the global stage Federal Reserve chair Janet Yellen hosts the who's who of central banking at Jackson Hole in the back-blocks of picturesque Wyoming.

It starts on Thursday evening with little news expected before the weekend.

While it is generally a "big picture" meeting, the only immediate issue for investors is whether Dr Yellen will continue the recent narrative from the Fed that interest rate hikes may resume in coming months.