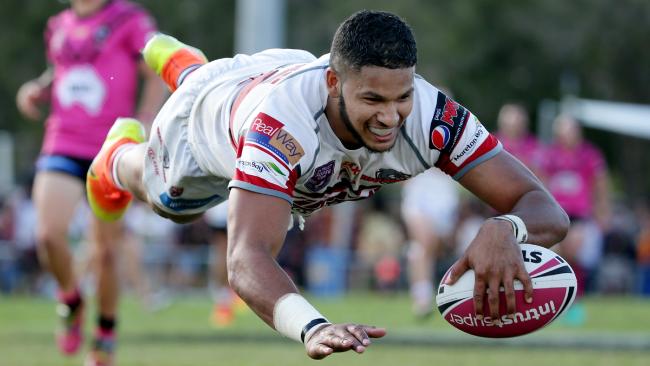 THE Broncos are set to roll out the next Jharal Yow Yeh with exciting winger Jonus Pearson placed on standby for tomorrow night’s clash against the Eels at Suncorp Stadium.

Maranta looked good early but pulled the pin about halfway through the session and faces a fitness test tomorrow to determine if he will face the Eels.

Should Maranta be ruled out, Broncos coach Wayne Bennett will hand a debut to Pearson, whom Brisbane enforcer Sam Thaiday likened to Yow Yeh earlier this season.

Yow Yeh was a Test and Origin winger when his career was tragically ended by a shocking ankle injury, but in Pearson the Broncos have a rookie flanker destined for NRL stardom.

The 21-year-old Yeppoon product represented the Broncos at this year’s Auckland Nines and has been in hot form in feeder-club Redcliffe’s charge to the top of the Intrust Super Cup ladder.

Pearson stands 183cm and weighs 95kg and Bennett backed him to handle his first-grade baptism against the Eels if Maranta is a match-day withdrawal.

“Lachlan is in a bit of doubt but we’ll see how he is tomorrow. He is pretty close to playing, he hurt his groin last week in Sydney and is much better, but we aren’t totally confident so we’ll give him a fitness test in the morning.

“Jonus has been good, he’s played at Redcliffe all season, we’ll see in the morning but he’s 18th man if we need him.

“Jonus has done every training session with us since November so they know what’s required and he’s in a good system at Redcliffe.

“We kept him last year because we felt he had a future here and nothing has changed.”

Injured Jordan Kahu (pectoral muscle) briefly filled in for Maranta this morning, but Bennett said the Kiwi Test star may not be seen for at least a fortnight.

“Looking at Jordan this morning, he’s probably a couple of weeks away,” he said.

“We thought he would be closer than that but he’s not confident enough in his left side to play.

“He’s strong enough but not confident enough so we’ll have to wait a bit longer.”

Bennett is wary of a gutsy Eels side and challenged the Broncos to consolidate on last week’s Dragons victory to maintain their place in the top six.

“It’s really important we back it up,” he said. “We have to put a line in the sand and back some games up.

“I expect Parramatta to be tough and desperate to play well and we have to answer that and be on our game. We can’t be flat.”