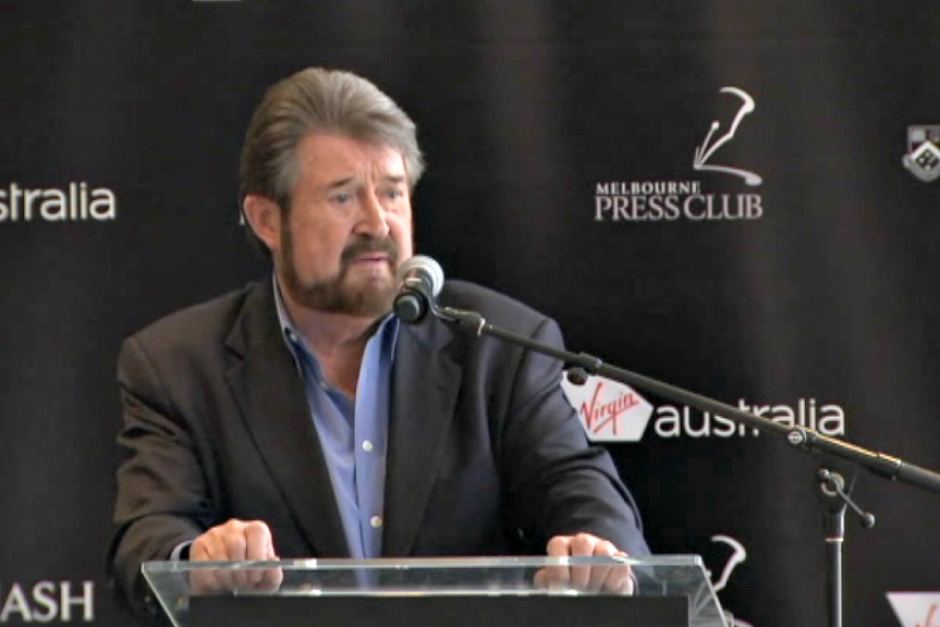 Mr Hinch, who has long called for a national public register for sex offenders, read out a letter from actress Rachel Griffiths during a Melbourne Press Club address which asked for his support to help prevent child sex tourism.

"100,000 convicted sex offenders on the register ... the private register, go to Indonesia every year," he said in response to the letter.

"That's [an issue] that I can get involved in, and they are the sort of thing I want to do."

Mr Hinch also hinted that candidates from his Justice Party may run in upcoming state elections to campaign on law and order issues.

"Watch this space, and that's not just Victoria," he said.

But he said on principle, he would remove state governments altogether.

The broadcaster, who said he had no intention of getting into politics a year ago, also defended cartoonist Bill Leak.

Leak's cartoon published in The Australian newspaper on Thursday was branded "racist" after it showed an Aboriginal child being handed back by a police officer to an apparently drunk father who could not remember his son's name.

"We're meant to be journalists, we should be supporting him," Mr Hinch said.

"You might have found that cartoon offensive — of course it was offensive — but what do we say 'Jes suis, Charlie, but ban Bill Leak?'"

"It's mad, I cannot understand this. It's okay to depict Mohammad as a pig or a dog, but you can't say what you think about some situation about Aboriginal kids? I thought his cartoon hit home, as cartoons are meant to do."

Mr Hinch said he would also push to amend Section 18C of the Federal Racial Discrimination Act, used to prosecute conservative media figure Andrew Bolt over two articles he wrote in 2009 about light-skinned people who identify as Aboriginal.

"It should not be a crime to offend or insult someone," he said.

"I am offended and insulted by a law that could put you in jail because you offended somebody.

"We have defamation laws — use them."

Mr Hinch said he intended to use his time in the Senate to push for voluntary euthanasia, improvements to Australia's organ donation system, and advocate for animal rights and domestic violence issues.