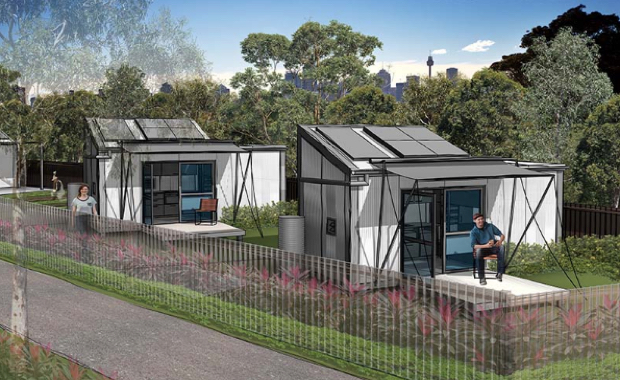 A new project in Gosford, NSW could be a big step in the right direction to ease Australia’s growing homelessness concern.

This big step may encourage innovation and propagation of the idea to other areas which also experience homesslessness issues.

Queensland too has had its fair share of homelessness and related suicide issues notably in the Moreton Bay Region where a recent study illustrated that Caboolture had one of the highest suicide rates in Australia steming from hopelessness and with out a place to call home as being a fundamental reason.

To the rescue is the innovation in homes that are cheap self sustaining and small that is where the Tiny Homes Foundation is a catalyst in making this idea a game changer in addressing this issue, as well as returning dignity to those that need it.

The Tiny Homes Foundation (THF) has now received DA approval to build what is believed to be Australia’s first tiny house project for homeless women, men, youth and the elderly.

The THF project will consist of four houses each measuring around 14sqm. Each house will have their own kitchen, bathroom, living area and sleeping area.

Artist concepts of the Tiny Homes

Formally homeless tenants will also have access to separate buildings that round out the Tiny Homes community which will provide a common laundry and workshop and common lounge with TV and internet.

The homes themselves have a finished cost of less than $30,000 embraces solar efficient design.

THF Co-founder and CEO David Wooldridge said what makes the initiative groundbreaking is the fact that it is council approved, low cost, replicable and features Australia’s first “equity participation scheme for tenants”.

This assistance to help the homeless get a leg up in world once they are set up with accommodation is the next step in the THF model, as Wooldridge believes the approval for the housing is the first step in the right direction.

“A home is not just a roof overhead, it is a springboard under your feet,” he said.

“We believe in ‘housing first’, not housing only, so it provides a great foundation to build on.”

The next stage in THF’s model is to support their homes’ inhabitants with a network of training, employment and social support services.

Free access to the full plans, documentation and process will be made available to others who are able to replicate the project in other parts of Australia, as THF are eager to see their solution to homelessness wide-spread.

With  The Urban Developer