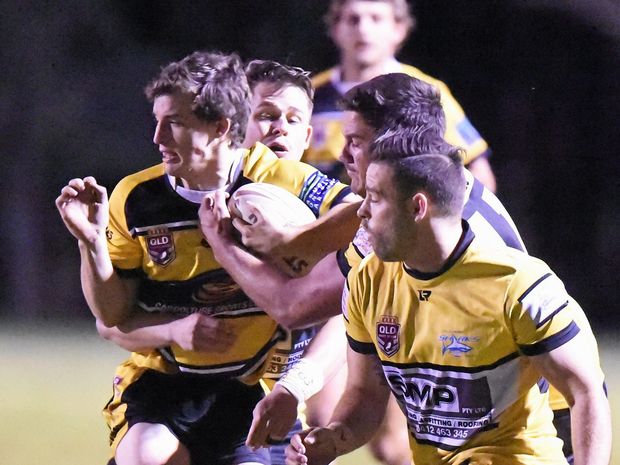 Sharks are keen to right the ship in local league

RUGBY LEAGUE: The wheels haven't completely fallen off but Caloundra's drive towards the minor premiership is proving to be a shaky one.

After five straight wins, the ladder-leading Sharks were held to a draw by battling Nambour and last week was thumped 30-10 by Caboolture.

"We had that little break but....now they're very close to us,” coach Glenn Irwin said.

In fact, just one point separates the top three teams after 18 of 21 rounds in Caloundra RSL Cup.

Irwin was unsure whether his team had felt the pressure as a competition leader.

"We haven't really spoken about it but it may have played a little bit into it last week,” he said.

"We just had one of those nights. Caboolture got a really good start and we couldn't peg them back.”

He said his charges have to "forget about it” and "move on”.

And there's plenty at stake in coming weeks.

The minor premier will get a second chance and earn a home semi-final.

"So there's something to play for,” the coach said.

"At this time of the year everyone has got to lift. If they've got aspirations of finishing in a certain spot, everyone's got to find that little bit extra.”

But he was also wary of thinking too much about finals.

"We can't look too far ahead. All we can worry about this week is Kawana.”

The Sharks will face their arch rival in a top-of-the-table clash at Shark Park on Saturday night.

"It doesn't matter where we're positioned in the table, it's always a hard game,” he said.