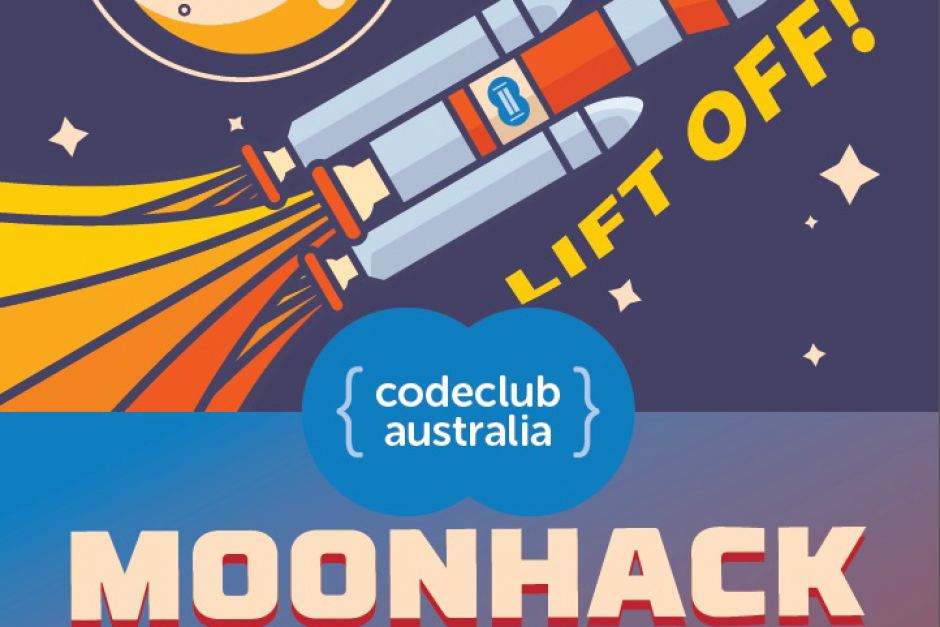 Computer coding is child's play, if an Australian world record attempt is anything to go by.

Up to 10,000 Australian kids today take part in Moonhack, a live and online coding event that is using the July 20 anniversary of the Apollo 11 moon landing as the inspiration for a series of exercises.

The goal is to set a world record for the most children coding at once.

So what actually is 'coding'?

Put simply, it's the stuff that makes your computer work.

Code Club Australia is a not-for-profit organisation that is running the Moonhack event. General Manager Kelly Tagalan said the premise of coding was actually pretty basic.

"Computer programming, or coding, is basically a set of instructions for a computer to understand," she told ABC News Breakfast.

"Have you ever had an error on your website when you're trying to type something in and you get that block of letters and numbers and symbols? That's what [coding] script looks like."

And kids can actually do this?

Not only can they do it, it turns out they're really good at it.

"[Kids have] the aptitude and the appetite," Ms Tagalan said.

"They love making games and stories that have their own rules and narrative involved."

Code Club Australia runs coding clubs across the country that aim to improve the digital literacy of children aged about 8-11. It has taught tens of thousands of kids since it launched just two years ago.

"We get this programming language called Scratch, it's lots of colourful little blocks. These are things that kids are familiar with," Ms Tagalan said.

"They learn the coding concepts, then they move into something that looks like a [computer] script."

Moonhack has devised a curriculum based around the moon landing that Ms Tagalan says is "all very, very Aussie".

To be considered part of the world record attempt the participants must be aged under 18 and complete a series of online coding exercises that are accompanied by a live digital event.

"[We will] help kids feel that their own narrative and their own story is built into this world record."

"Schools and libraries and community centres and in homes across the country, kids will be attempting these projects and then submitting them and we will be counting those as participations towards setting a world record."

Why is this event important?

Moonhack isn't about creating an army of pint-sized computer programmers, Ms Tagalan said, but about getting kids to solve problems in news ways.

"What we're hoping is that children learn a new way of problem solving so that they can be tomorrow's Australian innovators."

"Lots of things that we do and lots of things we will pursue as interests as adults can be benefited by understanding how to think, computationally."

But is a robot going to steal my job?

"Computers will help automate jobs but there are people who will help build what those computers do and also think about the applications for specific industries," Ms Tagalan said.