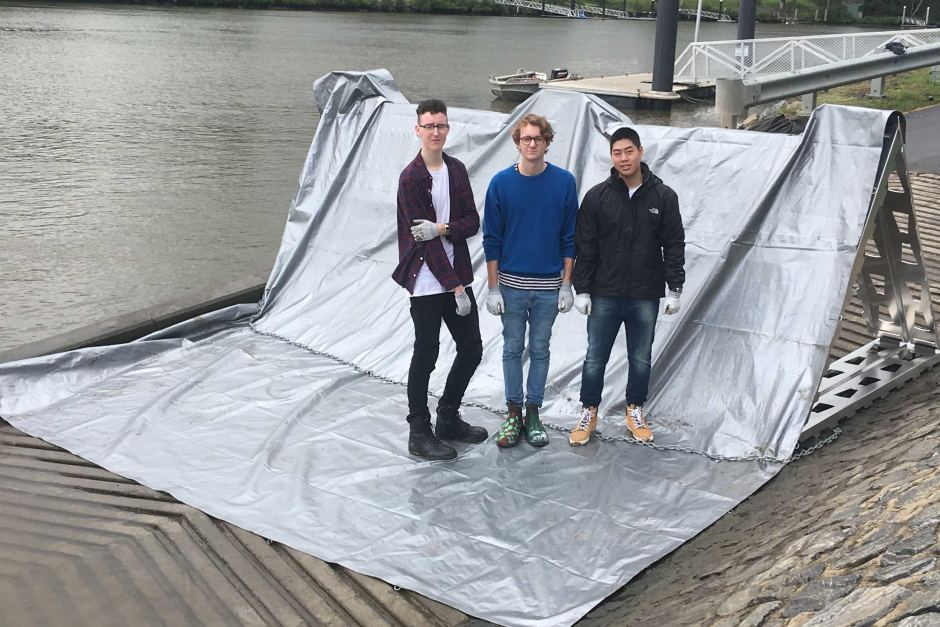 An Australian-first portable temporary flood barrier designed by a group of Brisbane university students for a competition will go into production.

Their brief from the Flood Solutions Advisory Group (FSAG) was to design a barrier system that could be easily and quickly deployed to flood-prone areas, with high usability and maintenance values for the communities.

The barrier is assembled without nuts and bolts and can be snapped together with only a handful of volunteers.

Using an A-frame base with giant panels, a wraparound membrane is then put over it to hold back rising water.

The portable levy, likened to Lego, can be four metres high and as long as is required.

Mr Gurr said they endured plenty of all-nighters trying to come up with the concept - which all started by cutting up a shoe box.

"We got the scraps together and that way ... we used a bit of sticky tape and kind of got the concept down," he said.

Mr Crawford said they then progressed to laser cutting cardboard and then acrylic before making the final design in aluminium.

The students said they were proud their concept was going to market and hoped in the long run it might save lives.

Simulated flood testing of the portable barrier is being finalised in Sydney with a rollout expected in a year's time.

FSAG managing director Keith Jackson said he had reservations such a young team could come up with a such a smart solution.

"But they have blown us away with its absolute simplicity and brilliance," he said.

The fact it is so easy to assemble, cheap to manufacture, and has no fiddly spare parts is what makes the Australian-first design stand out.

"Australian authorities in the past have been investing quite heavily in imported systems," Mr Jackson said.

"And when you think about it, the metal for those systems probably comes out of the ground in Australia is sent to China for processing, sent to Europe to be made into flood barriers, and put on a boat and brought back here.

"It is ridiculous, it is unsustainable."

The Local Government Association of Queensland said it was confident the portable barrier would help save flood-prone towns from going under.