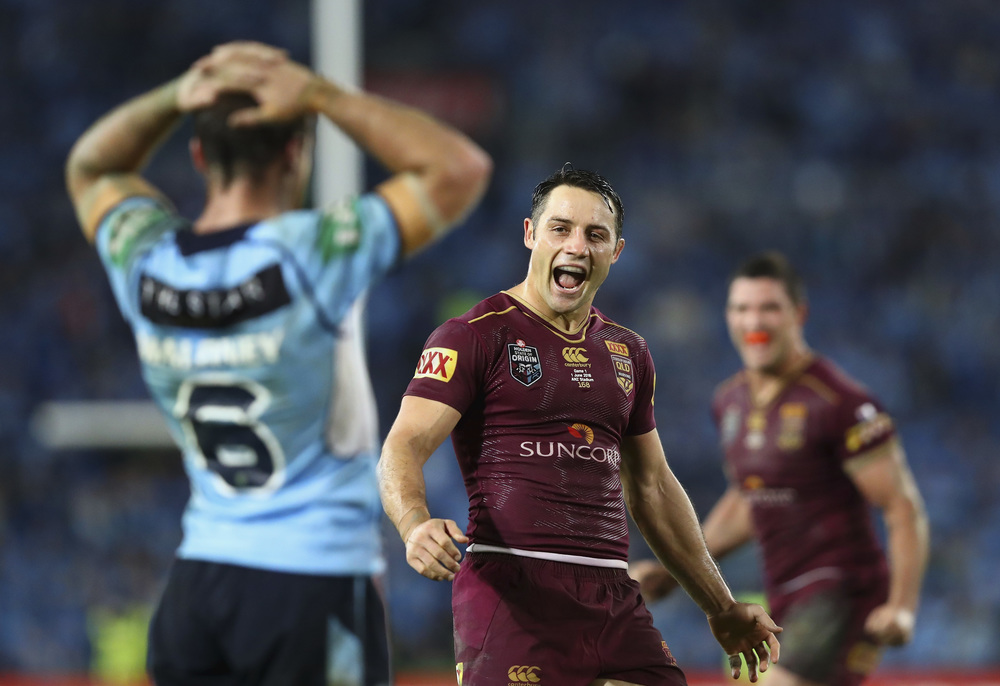 Queensland has held on for a tight 6-4 win over New South Wales in State of Origin I after the Blues were denied a try late in the second half at Sydney's Olympic stadium.

Josh Morris had been awarded a try in the 66th minute by on-field referee Ben Cummins, but the decision was overturned after the NRL bunker judged the Blues centre had been held out by the Maroons defence.

It was hardly a popular decision with the crowd of over 80,000, but the Maroons were able to stay in front and claim the series opener with each side only posting one try, while the second half was a scoreless affair.

The Morris decision left the Blues seething, with hooker Robbie Farah venting his frustration with the refereeing performance.

"I thought we had some tough calls there in the second half", Farah told Grandstand.

"I guess it's not for me to comment on but it is pretty disappointing some of the things that went against us."

Dane Gagai scored the Maroons' try late in the first half, while Boyd Cordner had opened the scoring for the Blues in the 25th minute and attention will now turn to State of Origin II, which will be played at Brisbane's Lang Park on June 22.

The Maroons dominated both possession and territory in the opening 15 minutes, completing all their sets through repeated raids on the Blues' line.

At one stage they had restricted the Blues to just 33 per cent possession, yet the only points they could come up with was a penalty goal from the boot of Johnathan Thurston despite being camped deep inside the home side's half.

It was not until the 20th minute that the Blues were able to make an entry inside the Maroons' 20-metre line and the rare expedition seemed to build their confidence, as they were able to hold on to the ball for a series of consecutive attacking sets.

The Blues were able to capitalise on their ball security when Cordner scored the opening try of the match in the 25th minute, although Maroons supporters would have been surprised James Maloney's flat pass to his team-mate did not attract greater inspection from match officials.

Nevertheless, the try was awarded promptly with Maloney having exploited a defensive lapse from Cooper Cronk to offload to Cordner, who crossed the stripe from close range for his maiden Origin try.

Adam Reynolds missed the conversion attempt to leave the score at 4-2 in favour of the Blues, who by this stage had evened up the possession stakes and gained momentum.

The Maroons' attacking game had appeared to go limp but it roared back into action with just three minutes until half-time when Gagai streaked over for a try down the right touchline.

The visitors launched a movement from the midfield towards the right edge, with Thurston shaping to kick but instead employing a second-man play while enjoying a three-on-two defensive advantage.

The ball found an unmarked Gagai on his flank, with the Newcastle Knights flyer doing all he had to do to give the Maroons their first try.

Thurston was unable to land the conversion attempt from wide out, but the Maroons had shifted two points in front of the Blues on the scoreboard before the two sides left the field for the half-time break.

Maroons hold on in scoreless second half

The second half started in a positive manner for the Maroons, whose kick-chase pressure produced a turnover when Blues debutant Matt Moylan knocked on when attempting to take a high ball in the opening minute of the term.

The Maroons came close to scoring from the attacking set that followed, but Gagai's thrust towards the line on the right edge was halted by excellent Blues defence.

Both sides failed to lay a glove on each other in attack until the 54th minute when a Farah grubber kick into the Maroons' in-goal area was spilt backwards by Gagai, before the ball was paddled dead.

The Blues again peppered Gagai with a grubber kick in their next attacking set, but again the Maroons were able to survive with their line intact and they even had a chance minutes later when Cronk was just edged out when chasing through on a kick into the opposition in-goal area.

The tension continued to grow with the Maroons defending their two-point lead, although the Blues came close to moving back in front when Morris was denied a try on the right edge with 14 minutes on the clock.

The bunker adjudicated that the try be disallowed despite being awarded on the field and it proved to be the final genuine scoring chance for either side, as the second half soon drew to a close.