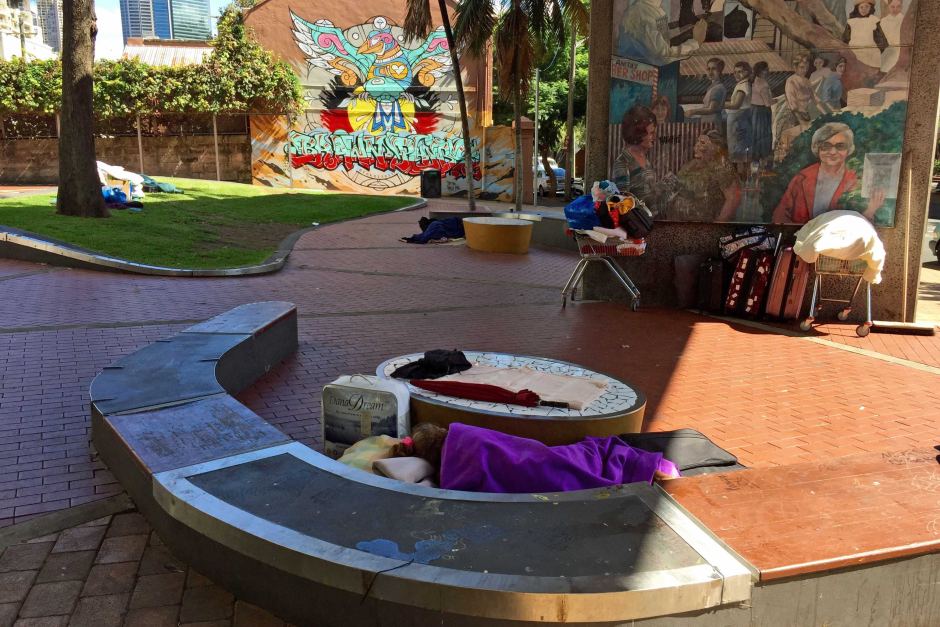 There are about 4,000 women in Brisbane homeless on any given night, says one expert, and only 46 beds available to them in shelters, compared to 200 beds for men.

Over 40 per cent of people homeless because of family, relationship breakdowns

Helena Menih from the University of New England spent 10 months on the streets of Brisbane talking to homeless women about their experiences as part of her PhD studies.

She says the number of homeless women in Australia is growing and domestic violence is a common thread.

"One important element here to consider is women who are at risk of becoming homeless — so before they actually end up on the street, there is something that needs to be done," Dr Menih said.

"Either there's an increase in shelters, or in developing mechanisms with services that are addressing issues like domestic violence, and how can women safely leave violent homes and go to safe havens rather than live on the streets.

"All the women that I talked to had some sort of episode of violence in their lives, either in their adulthood or their childhood."

The Australian Bureau of Statistics (ABS) found in its 2014 General Social Survey that about 2.5 million Australians had experienced homelessness at some time in their lives, and the most common reason affecting more than 40 per cent of them was family and relationship breakdown.

They have enough room for about 20 needy people to put their head down and get a few hours of uninterrupted sleep, without the fear and humiliation of the street.

Sara Harrup, the chief executive of 139 Club, said as much as staff would like to let people sleep there overnight, they were unable to because there was not enough money in the budget to allow it to stay open all night.

"I think availability of crisis accommodation is certainly an issue," she said. "It's around having that stop-gap to get a roof over someone's head as quickly as possible while you're thinking about what's next."

Ms Harrup said from her observations during the run-up to the election, "homelessness is never really a big talking point".

And she said older women were becoming more frequent visitors.

"We are seeing more women in their senior years," she said.

"It's financial stress [that] has led to homelessness, where there's been a breakdown of family relationships, where once grandma might have been living with their daughter and their family, and something's fractured there and that's led to homelessness."

'Homelessness is not by choice'

One middle-aged woman at 139 Club, "Leonie", said she had been living rough on the streets of Brisbane for the past two-and-a-half months, carrying all her worldly possessions in one suitcase.

"To me sometimes I feel like a slave dragging around this huge suitcase, which is like dragging a chain," she said.

"But someday I hope to get rid of that suitcase, just totally burn it, so there's no recollections that I've been there once upon a time."

Leonie said she once had a roof over her head in supported accommodation, but said that arrangement broke down when conflict grew over her fellow tenants' alcohol addiction.

She said she had also lost contact with her immediate family, and had nowhere to turn.

"It's been hard because it's not comfortable, because you have to find a mattress or something similar so you don't wake up with aching bones," Leonie said.

"And you have to pray that you're going to wake up alive."

Leonie said she hoped the federal election would make decision-makers think about what they could do for homeless people, such as herself.

She said she felt forgotten by society, and wanted to get a message to policy-makers.

"If you can please recognise that homelessness is not by choice, if we could all live happily, we would," Leonie said.

"And we're encouraging you to consider putting homeless shelters in your budget, even if it's two or three, and get some of these people off the streets."