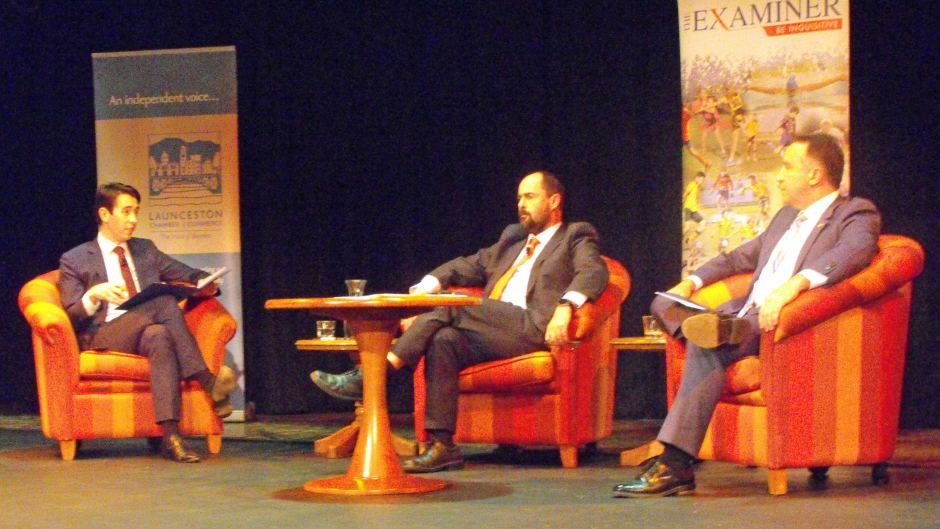 There were no surprises in a political debate between Bass Liberal MP Andrew Nikolic and Labor candidate Ross Hart where the usual questions on jobs, health, and education dominated.

Relocation of northern UTAS campuses a focus of debate

ALP accused of running a scare campaign on Coalition policies

Nikolic and Hart agree medical marijuana should be available

About 150 people attended the Examiner debate in Launceston on Thursday night.

Mr Hart spruiked Labor's $150 million pledge for the University of Tasmania's plan to move its northern campuses into the centre of Launceston and Burnie.

"It is the single most important investment in our people, and in a long term infrastructure project," he said, challenging the Coalition to match the funding promise.

Liberal MP Andrew Nikolic said he and other Coalition members had championed the project and he expected to hear more about it before the election.

"I was encouraged by what the Prime Minister said when he was here last time," he said.

Mr Nikolic noted a previous Coalition offer of $400 million for the project was scuttled when the Senate refused to pass the Government's legislation to reform higher education.

Mr Nikolic accused the ALP of peddling lies about the Coalition's plan to outsource processing of Medicare payments.

"The suggestion that we are privatising Medicare, billboards and all, is a bald faced lie. There is no other word for it," he said.

Mr Nikolic said Labor was running a scare campaign about the Coalition's policies.

"A scare campaign on Medicare, on penalty rates, on health cuts, on education cuts," he said.

Mr Hart said voters should beware of what the Coalition would do in those areas.

"I can have an informal poll in the room here as to who wants their health data or their financial data shared with a private corporation, on the privatisation of the payment system of Medicare," he said.

"I assume most people are not prepared to allow that to happen."

Both agreed that people with severe illnesses should be able to access medicinal marijuana, while Mr Hart went further and said those people should not be prosecuted for growing marijuana.

"I believe those people who are growing medicinal cannabis for personal use, for personal treatment, should be permitted to do so, providing a doctor indicates that that's for therapeutic purposes," he said and conceded it was not ALP policy.

Mr Nikolic said he was in favour of traditional marriage, but would accept the results of the Coalition's proposed plebiscite on the issue of gay marriage.

"So if Bass chooses same sex marriage in the plebiscite, I will vote for that," he said.

Mr Nikolic spoke of his ability to secure funding for projects in the electorate. (ABC News: Laura Beavis)

Mr Hart said he supported gay marriage and did not see a need for a plebiscite.

Mr Nikolic talked up his ability to secure funding for projects in the electorate.

"Here in Bass, that's about $160 million of job creating projects in the last three years," he said.

"I'm talking about things that will be strategic enablers of our state's future prosperity year on year, not just for tomorrow."

There was a mixture of applause and jeers from the audience when Mr Nikolic defended the Coalition's cuts to company tax.

Greens candidate Terrill Riley-Gibson had initially accepted an invitation to take part in the debate, but chose not to participate after Mr Nikolic said he would boycott the debate unless it was only between himself and Mr Hart.

He said the Liberal Party adopted a policy in 2014 only to take part in head-to-head debates with Labor.

Ms Riley-Gibson received loud applause when she stood up in the audience early in the debate.

Launceston Chamber of Commerce president Donna Bain said Ms Riley-Gibson's decision was gracious, but she was disappointed the Greens had not taken part in the debate.

"Because I believe that our community is strengthened when we engage in honest and robust discussions about all the things that matter to us," she said.