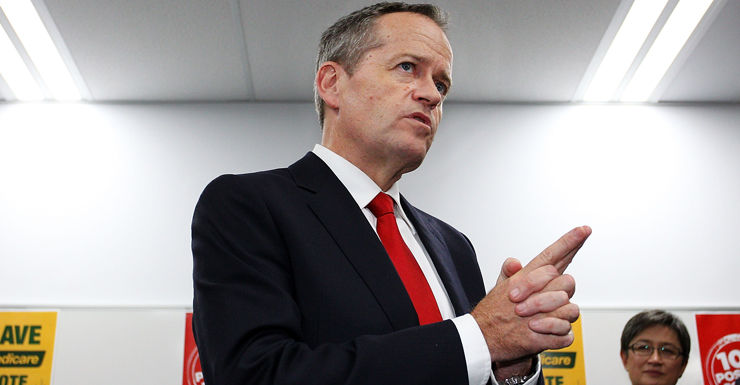 Federal Election 2016: Leaders blaze away in dying days of campaign

Bill Shorten fires up against political Malcolm Turnbull – and a senior ABC journalist.

In the midst of increasingly personal attacks between the Malcolm Turnbull and Bill Shorten, the Opposition Leader has come under sustained fire from another quarter: the ABC.

Medicare was in danger through government actions on bulk billing, a $5 million outsourcing task force, and GP rebate freeze. Boat turnbacks were now Labor policy. The higher deficit was justified because Labor would not cut company tax. There was no hypocrisy because former PM Paul Keating had offset his company tax with a capital gains and fringe benefits tax. The schools kids backflip was hard but necessary. Labor had unified after its acknowledged disunity.

“That’s a bridge too far,” was one of Shorten’s tetchy replies. Photo: ABC

When challenged by 7.30 host Leigh Sales of running a “joint venture” with the allegedly lawless CFMEU, Mr Shorten fired back: “Leigh, that’s a bridge too far.”

He would not condemn the union and its members, but said he had no tolerance for any criminality by any of its officials.

As the election campaign enters its last week, both Mr Shorten and Mr Turnbull must now face another prime time grilling: Four Corners on Monday with the ABC’s Sarah Ferguson.

Suggested question for Sarah to ask both leaders: Given the Parakeelia Liberal slush funding scandal and continuing concern about trade union abuse of power, will you announce the establishment of a national anti-corruption commission?

The recriminations turned personal on Thursday as the major party leaders jostled to go negative in their competing character assessments.

“He would run Australia at the direction of the trade unions,” was Mr Turnbull’s first salvo.

Mr Turnbull is not “his own man”, Mr Shorten retorted.

Mr Shorten complained that Mr Turnbull had said nothing to clear the air over revelations that the Liberal Party was effectively washing taxpayers’ money through its constituent software monitoring company Parakeelia Pty Ltd.

And he said Mr Turnbull lacked the gumption to stand up against homophobic hardliners in his party seeking an unjustified plebiscite on same sex marriage.

Denouncing trade union “control” of the Labor Party, Mr Turnbull said Mr Shorten had surrendered his leadership to the militant unions, and would surely hand over the reins of the country to them as well.

On Thursday, he again intervened in the Victorian dispute between career firefighters in the United Firefighters Union (UF) and the volunteers of the Country Fire Authority volunteers. The issue is seen to be galvanising in the marginal (3.9 per cent) Liberal seat of Corangamite which the Coalition needs to retain.

It seems the Liberals think the CFA dispute may shore up marginal Victorian seats. Photo: Getty

“Your volunteerism, your service, your selflessness is being trampled on,” Mr Turnbull told rallying volunteer fire fighters.

Mr Shorten responded that as a negotiator himself he was confident the CFA dispute could be resolved to the satisfaction of all parties.

“Does anyone think that if there wasn’t a federal election Malcolm Turnbull would have anything to say about this issue?”

Justice Minister Michael Keenan said Dr Aly had made representations to reduce the jail term of an Islamic preacher and questioned her judgement. Dr Aly stood by her actions which she said were in no way related to terrorism.