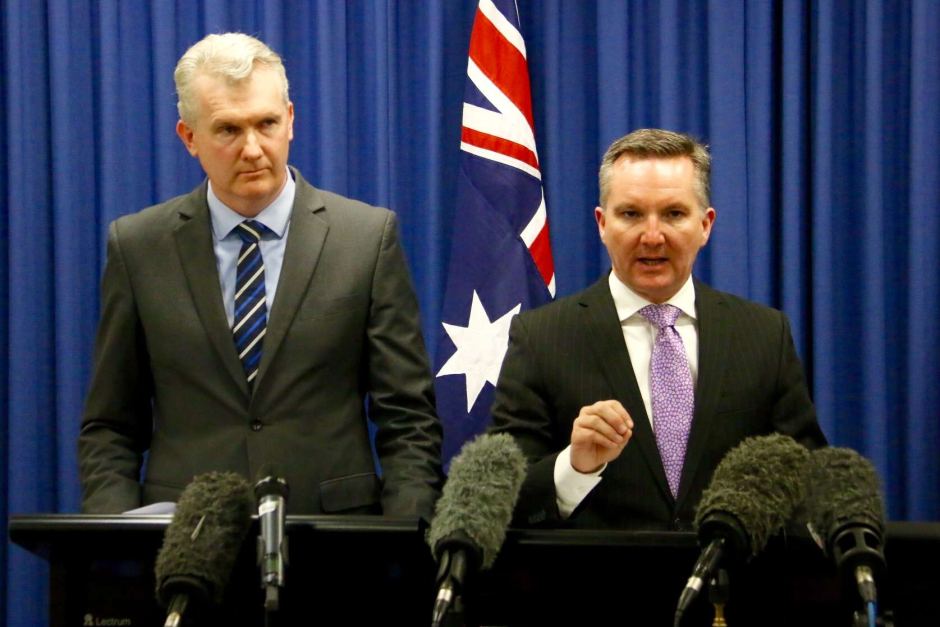 The Federal Opposition has confirmed the budget would be $16.4 billion worse off if it wins government but insists it would return to balance at the same time as the Coalition thanks to long-term, structural reforms.

Labor to bank nearly $3 billion from the Coalition's superannuation changes

Labor says it would to balance budget at the same time as the Coalition, in 2020-2010

Unveiling its final costings in Brisbane today, Labor announced its final two savings measures and revealed it would bank nearly $3 billion from the Coalition's superannuation changes, without committing to adopting the policy.

Shadow Treasurer Chris Bowen said together with the policies already announced, Labor would deliver $10.5 billion in savings over the next decade, bringing its total budget improvements to more than $130 billion.

Mr Bowen also confirmed Labor would return the budget to balance at the same time as the Coalition in 2020-21, but its deficits would be deeper for the first four years.

"Labor confirmed they will increase the deficit by $16.5 billion at least. They confirmed, therefore, that they would increase debt," he said.

"This is something that will weaken our economy and a time when we need to be doing everything, particularly right now, to strengthen our economy."

Shadow finance spokesman Tony Burke said on Sunday the Coalition's numbers could not be trusted because it had banked savings from unlegislated measures that were still stuck in the Senate.

"They have $6.9 billion worth of measures known as zombie measures that they have embedded into the budget bottom line that will never, never pass the Parliament," he said.

"They cannot and will not deliver the numbers that are contained within the budget."

Labor said it would deliver a further $10.5 billion in savings over the next decade (ABC: Nicholas Haggarty)

In a bid to dent the Coalition's economic credibility, Mr Burke labelled its company tax cut plan a "reckless, fiscal ram-raid" on the budget and contrasted the promise with Labor's long-term structural reforms.

"The Coalition is actually deliberately putting forward a structural deterioration," he said.

"The hit to the budget gets worse and worse year on year.

"Whereas Labor, by putting forward the changes in particular to negative gearing and capital gains tax, has a structural improvement to the budget that the budget and the nation needs."

Labor announced it would save $430 million over four years by placing a $5,000 cap on the amount individuals can claim for the cost of managing their tax affairs and removing the Private Health Insurance Rebate from so-called "junk policies", or those that only cover public hospital treatment.

Mr Bowen said Labor had listened to the advice of medical and consumer groups which had been calling on the Government to either scrap the rebate or ban junk policies.

"These are policies in which the beneficiary — the policy holder — receives no benefit," he said.

"It simply insures people for public hospital access they already get as citizens, but enables the Medicare surcharge to be avoided."

But buried inside its fiscal plan was the revelation the party would bank the $2.9 billion in savings from the Coalition's superannuation changes, while not necessarily adopting the policy.

"Labor would consult with stakeholders and take a broader examination of all these measures on coming to government," the document states.