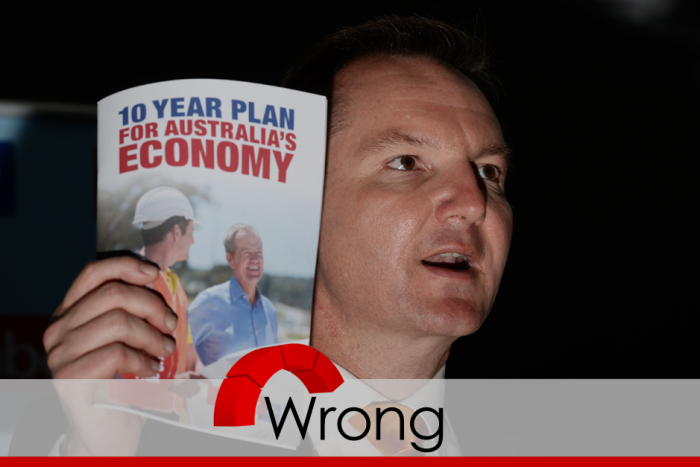 On June 8, Labor released its economic policy for the election, which it calls the "10 Year Plan for Australia's Economy".

The 10-year plan document was the centrepiece of the launch, proudly held up for photos by both Opposition Leader Bill Shorten and shadow treasurer Chris Bowen.

At the launch, Mr Bowen held up the document and said the plan is "the most comprehensive plan an opposition has released in living memory on our economy".

He also said that "two years of hard work" had been "brought together today in a holistic comprehensive plan".

Mr Shorten also held up the document and said "Our 10 year economic plan is based on the best interests of the Australian people. This plan outlines our policy priorities and the principles by which we would govern if we're elected on July 2."

How does Labor's "10 Year Plan" compare with those of past oppositions? ABC Fact Check finds out.

History shows that since the defeat of the Liberal-National opposition led by John Hewson in 1993, the trend has been for oppositions to provide ever decreasing levels of detail in their pre-election policies.

Even taking into account Labor's separately released policies on the areas touched on by the document, such as those on education, negative gearing and tax, Labor's plan is not in the same league as Mr Hewson's notoriously detailed Fightback! plan from the 1993 election, which spanned around 650 pages (not including the other opposition election policies).

Labor has produced an attractively designed booklet about its economic intentions for government but however you look at it, its "10 Year Plan on the Economy" is not the most comprehensive economic plan by historical standards.

In assessing Mr Bowen's claim, Fact Check has had to form a view on the meanings of "comprehensive" and "living memory".

How comprehensive a policy is has been assessed by considering both at the actual volume of information and pages, the number and scope of measures actually included and the amount of detail provided such as funding information.

A dictionary definition of "in living memory" is "within or during a time that is remembered by people still alive".

This could conceivably include election campaigns as far back as 1931, when Joe Lyons became prime minister.

But for present purposes, Fact Check has considered campaigns from 1987 election onwards, the election Opposition Leader Bill Shorten says was "the first one I could vote in".

This fact check does not analyse every opposition economic policy document since 1987, nor does it cast any judgment on whether the policies were well-crafted or achievable.

What is Labor's plan?

At the launch, Mr Bowen said: "Labor has a plan built on two years of hard work, consultation, leading the debate, policy announcements which have been made over the last two years, brought together today in a holistic, comprehensive plan which deals with investing in the future through schools, renewable energy, infrastructure, our plans for small business and the National Broadband Network. And importantly, our plans for the budget..."

The document was held up for the cameras by both Mr Shorten and Mr Bowen when talking about "the plan". And Mr Bowen referred to "the plan", not Labor's "set of economic policies" or "policy platform".

When Labor has referred to the "10 year economic plan" in campaign material, on Twitter and Facebook, it linked directly to the 32-page document rather than its broader policy platform.

Out of the booklet's 32 pages, there is the equivalent of 12 pages of photos (including 9 full page photos), a page of quotes from an Organisation for Economic Co-Operation and Development (OECD) report and a four-page critique of the current Government (including graphs and other information), leaving the actual plan to around 15 pages of generously spaced text.

In summary, the main initiatives relate to:

The plan certainly covers a range of areas, including some such as education that are not strictly economic or fiscal measures.

Labor takes the view that improvements in education and training "drive productivity and ensure Australians are prepared for the jobs of the future."

The document itself lacks depth on the purely economic issues: a number of initiatives are described in very broad terms, some in only a single sentence and in most cases the focus is on goals rather than how to get there.

Some may argue that Labor's economic plan is not confined to the document entitled "Labor's 10 year Economic Plan" launched on June 8, and that document should be read in light of Labor's other policies referred to in the document.

Labor does provide some additional detail on some of the areas touched on in the "10 Year Economic Plan" through its separate policies, including those on:

By October 1989, Andrew Peacock had replaced John Howard as opposition leader. In the lead up to the March 24, 1990 federal election, the Coalition released an economic and tax policy it called the "Economic Action Plan":

For both the 1987 and 1990 elections, the opposition released separate policies in individual policy areas such as industrial relations, schools, small business, unemployment benefits and higher education.

Following its 1990 defeat, the Coalition set to work on a detailed policy program that became known as Fightback!

The first variant was released in November 1991, with a 15 per cent GST as its centrepiece.

The Liberal Party's Fightback! plan was an economic policy document with a length and depth rarely seen. (australianpolitics.com)

With some amendments, it was the platform that the Coalition took to the 1993 election, which it then again lost to the Labor government, this time led by Paul Keating.

Fightback! was an economic policy of a length and depth that is rarely seen.

The summary (referred to as "Fightback! It's your Australia") totalled 67 pages, with the taxation and supplementary components adding a further 594 pages.

The unusually high level of detail was acknowledged in the preface to the summary, which said the program was "unprecedented for any opposition in Australia's history".

"Our reforms defy the conventional wisdom that oppositions should let governments lose elections... To 'surprise' the Australian people with our policies after the next election would not only be dishonest, but it would also jeopardise public acceptance of the changes that Australia desperately needs."

Marija Taflaga, who is a PhD candidate at the Australian National University (researching the federal Liberal Party's policy and political communication during its time in opposition), tells Fact Check that "Fightback! was not just the GST."

"It also produced other detailed proposals from reforming the health system and restructuring the higher education sector to discussion papers about abolishing payroll [tax] and petrol excise. Many of their proposals were major reform tasks in their own right and in 1993, the Coalition, with the combination of them all together, made itself a giant target."

In his 2014 interviews with Kerry O'Brien, Paul Keating recalled that "the whole blueprint of Fightback! [was] spelt out so specifically across so many areas touching people's lives".

YouTube: A video released by the Liberal Party to accompany its Fightback! manifesto.

Measures proposed (and described in detail) in Fightback! included:

Ms Taflaga said: "Fightback! was a far more comprehensive plan than those put forward by recent oppositions, including Labor's 10 year economic plan in this election."

Associate Professor Haydon Manning of Flinders University tells Fact Check: "It is baffling that Mr Bowen forgets one of Labor's greatest electoral victories, in the midst of a deep recession, when in 1993 Paul Keating's campaign worried Australians out of supporting the 650-page Liberal manifesto, Fightback!"

"It was later described by Hewson as 'the longest electoral suicide note in history'," he says.

"When Hewson retired from politics, Keating praised him for having had the courage to detail a vision, and that vision, like its politics or not, was far more substantial than Labor's 2016 10-year plan".

The Coalition also released a suite of separate policies for the 1993 election, including on industrial relations (41 pages), job creation (86 pages) and trade (33 pages).

Political observers agree that after the Coalition failed to win the election in 1993, parties have provided progressively less detail in their pre-election policies.

Ms Taflaga tells Fact Check: "If you ask politicians now why they use a small target strategy, they will often mention Fightback! Virtually everyone thought Hewson would win. When he didn't, his approach was totally discredited. People had put in so much work and it had all been for nothing."

She also points to the rise of political research allowing more targeted campaigns, and a period of sustained economic growth that lessened the perceived need for tough economic measures.

In 1996, the Coalition opposition led by John Howard issued a number of fairly detailed economic policies in areas including privatisation (24 pages including a 'blueprint' section) and industrial relations (13 pages, including the plan to introduce Australian Workplace Agreements or AWAs).

However, unlike Labor in 2016, the Coalition did not attempt to produce a "holistic comprehensive plan."

Ms Taflaga has suggested that "what we see as the first successful small-target campaign — John Howard's 1996 election-winning strategy — was not as small as contemporary Labor and Coalition figures like to believe".

"By the time Howard was drafted into the Liberal leadership in 1995 he had been in politics for more than twenty years... in many ways he was already a walking policy manifesto," she has written.

The Tony Abbott-led Coalition produced the 52-page "Real Solutions" policy document in 2013, with around 48 pages of substantive content.

It included measures such abolishing the carbon and mining taxes, reintroducing the Australian Building and Construction Commission and developing a 15 year infrastructure plan.

But "Real Solutions" was not a comprehensive plan in the mould of those produced by the Coalition in the 1980s and early 1990s.