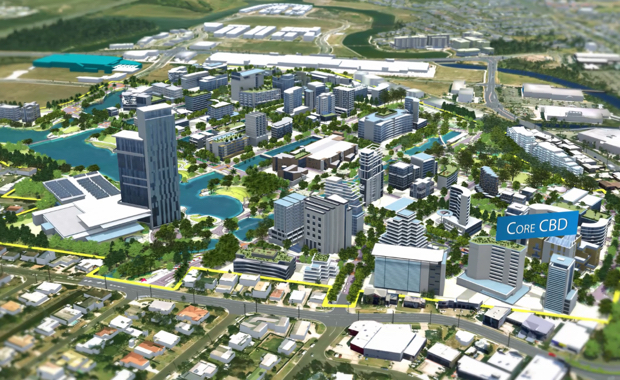 SunCentral Maroochydore will on Monday (June 27) officially invite Expressions of Interest in the Sunshine Coast’s new city centre which offers a once-in-a-generation opportunity to be part of the most technologically advanced CBD in the country.

“It offers a unique chance for those in the professional services, education, research and development, business tourism and civic services sectors to be part of creating a brand new city centre in one of the fastest-growing regions in the country.

“Because it is a greenfield site, we can embed digital technology into the foundations of the central business district to create a genuine city of the future with super high speed connectivity, smart signage and lighting and public realm wi-fi.”

Mr Knaggs said an independent assessment estimated the new CBD would provide a $4.4 billion boost to the Sunshine Coast economy over the next 20 years and generate 15,000 jobs in the next decade.

“The Sunshine Coast is one of only five regional cities recognised by Infrastructure Australia as being a major contributor to the nation’s productivity and the new CBD at Maroochyodre offers the chance to be part of that economic growth,” Mr Knaggs said.

“The recently announced Sunshine Coast Airport expansion is a significant drawcard because it will provide better, faster connections to national and global markets,’’ Dr McTaggart said.

“With economic and population growth both strong, now is the time to capitalise on increasing national and international interest in this region.

“The Sunshine Coast is coming of age.”

The Sunshine Coast business community shares SunCentral’s vision of the future with more than 60 per cent of the region’s 30,000 businesses forecasting a rise in profits this year[i].

Tourism is also booming, with visitor numbers rising by 9.4 per cent to 8.5 million in 2015[iii] with the expanded airport intended to cater for an increase in international arrivals.

“Many business advisers and leaders are starting to wake up to the potential of regional cities – but the Sunshine Coast is already ahead of them,” Mr Knaggs said.

“We’re setting the pace in Queensland and the future of the Sunshine Coast has never been brighter.”

Mr Knaggs said the new CBD’s proximity to the airport, its digital offerings including a proposal for a sub-sea broadband cable, its beachside location and the Coast’s highly-prized lifestyle made it an attractive destination for many business investors in the Asia Pacific region.

“We’re looking for investors and developers who embrace contemporary, diverse and innovative approaches to city-making,’’ he said.

He said more than 40 per cent of the city centre site would be waterways and parks with the new CBD offering cycle paths, shaded walkways, public spaces and a central corso lined with boutique stores, restaurants and bars.

“This is an exciting chance to create a brand new CBD, one that meets the economic, social and digital needs of today and for future generations,’’ Mr Knaggs said.