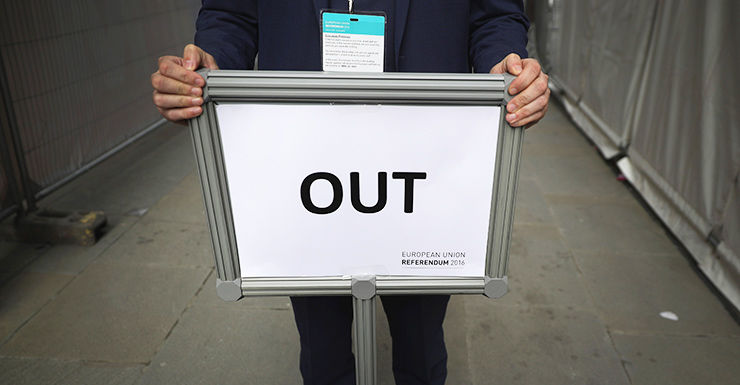 We had to look long and hard at the Brexit vote, but we’ve found a silver lining amid the panic.

Former Australian PM and aspiring UN leader Kevin Rudd has taken to Twitter calling for calm in the wake of the Brexit vote – Britain’s vote to leave the European Union.

Is he right to have a nice cup of tea and an iced vo-vo? Or is panic actually more appropriate?

The fact the UK just said “adieu” to the EU and a sitting prime minister in one fell swoop suggests not everyone is as sanguine as the ice-cold Mr Rudd.

Modern history is too short to give a clear answer on whether Brexit is a disaster or a storm in a teacup. The EU has been around for only 60 years and nobody has left before. It’s too short a period to deliver any definitive lessons.

We simply can’t find an exact match in history. But we can find a few things that share concerning similarities.

Breaking up is hard to do

History shows us many messy dissolution of political unions. The Soviet Union springs to mind. The Balkans. North and South Sudan. Of course the differences between these and the EU are legion. All were poorer than Europe is, and less stable. But they hint that breaking up is hard to do. Harder than it seems, sometimes.

The UK itself could split. Voters in Scotland expressed an overwhelming preference to remain in the EU.

If Scotland held another referendum on independence it could get a very different result to the 2014 referendum which split 45-55 per cent in favour of staying with Britain.

At the very least Britain will suffer a loss of jobs in finance, a fall in trade and a drop in foreign investment, all of which will hurt employment.

A lack of confidence in the future of Britain has shown up first in the currency markets. The pound has hit a 30-year low against the US dollar, falling as low as $1.32 before steadying to $1.37 at time of writing. That hasn’t been seen since the 1980s.

The head of the Bank of England has pledged to intervene as necessary, to protect stability.

For all those Aussies working in London and hoping to bring home a fortune in pounds sterling, the news is not nice.

If it is careful, Britain can keep calm and carry on. The bigger problem is Europe itself, now looking a lot more fragile.

The EU had an unblemished record of adding new countries and never losing them. That certainly helped carry it through the extremely difficult recent years when Greece was on the brink of disaster, and Portugal and Spain were not far behind. The European Central bank was able to back those countries up.

That was when the idea of a split from the Euro currency or the EU itself seemed far-fetched. Now it will seem far more plausible if – and it is probably more when than if – smaller European countries again run into financial trouble.

All of this uncertainty is also going to be tough on Australia, and it will go on for years. Not just the immediate impact this week, but also the challenges that will accompany the decoupling from Europe over the next two years. Whatever economic recovery we’re able to muster will now have yet another hurdle to overcome.

The impact for Australia is good in only one way, really. Holidays to the UK will be cheaper as our dollar is higher against the pound.

Time to pop into London and give our respects to the Queen, perhaps?