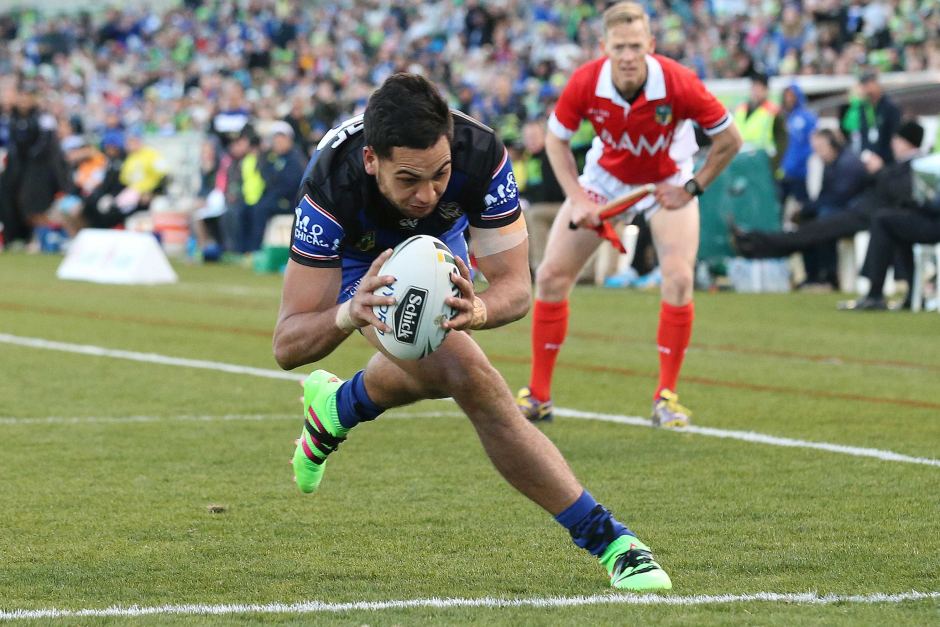 State of Origin: selections cause havoc on NRL round 12; Andrew Moore gives his top five moments

State of Origin caused a fair bit of disruption on round 12 on the NRL. Take a look back at the top moments from the weekend.

Bulldogs teenager Reimis Smith had a busy but memorable weekend.

On Saturday the 19-year-old scored a try for Canterbury in the New South Wales Cup victory over Manly at Belmore Oval.

Relaxing over breakfast on Sunday morning, he received a frantic call "Quick, get ready, we're coming to pick you up and drive to Canberra... you're in the team!"

Smith made his first grade debut hours later as Josh Morris was rushed into the New South Wales State of Origin squad.

He not only made it to Canberra with time to spare but he crossed for two tries in the first half. Well done to the young man, the son of former first grader and Kiwi international Tyrone Smith.

Queensland coach Kevin Walters wishes he had a couple of extra days to allow Cooper Cronk to recover from an ankle injury. (AAP: Dave Hunt)

Speaking to Queensland coach Kevin Walters on Grandstand Rugby League, the new Maroons boss asked me if I could get the game moved back a few days to ensure Cooper Cronk's fitness.

Sorry Kevvie, but I'm a New South Welshman, they should bring the game forward a couple of days!

Walters also gave us about 10 reasons why his Maroons are underdogs... yeah, yeah... we've heard that before! He's a great bloke, and it's actually difficult to cheer against him, but as Andrew Ryan said yesterday we'll manage it for a couple of hours on Wednesday.

Dragons shade the Cowboys in Wollongong

The Cowboys fell to the Dragons at Wollongong Stadium on Saturday night. (AAP: Dean Lewins)

At Wollongong Stadium on Saturday night St George-Illawarra was taking on a North Queensland side without five Origin players.

Things were going along nicely for the Dragons leading 10-0 after 14 minutes. But as they always do the Cowboys fought back with Kyle Feldt and Jahrome Hughes crossing for tries either side of half-time. Then the crucial moment came with about 18 minutes left.

Lachlan Coote for the Cowboys failed to find touch with a penalty kick and in the next set of six the Dragons produced what proved to be the game-winning try scored by centre Euan Aitken.
The Dragons held on to win 14-10.

The Raiders finished over the top of the Bulldogs in Canberra. (AAP Image: David Moir)

The Canberra Raiders looked in all sorts of trouble yesterday down 10-0 and then 20-10 early in the second half. But the Green Machine turned if on for the last quarter of the game storming home to win 32-20 thanks to four tries in the last 22 minutes.

With apologies to Bulldogs supporters, it was great to watch. The Raiders improve to sixth on the NRL table.

Tigers bring down the Broncos

The Tigers recorded back-to-back wins after scoring an upset victory over the Broncos at Lang Park. (AAP: Dave Hunt)

The Wests Tigers went to Lang Park to take on a still formidable looking Brisbane team despite the Broncos being without a bevy of Origin stars.

They still had that sensational halves combination of Anthony Milford and Ben Hunt.

To a degree though, they were upstaged by the Tigers pairing of Mitchell Moses and Luke Brooks. In fact it was Moses who proved to be the hero with a late field goal - something Ben Hunt couldn't match.

The Tigers win back to back games.