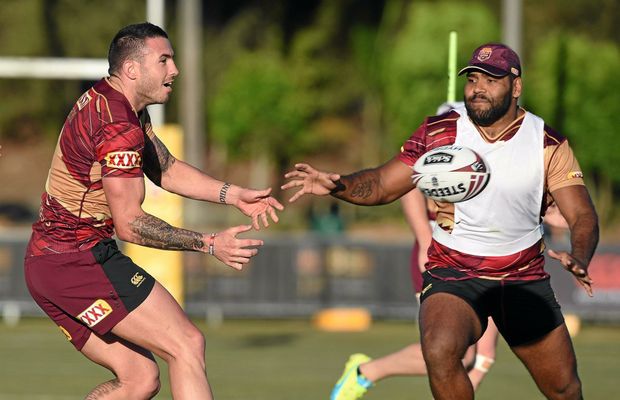 State Of Origin 2016: Boyd and co not about to be caught off guard

Queensland fullback Darius Boyd says he and his wingers, including rookie Corey Oates, are prepared for a New South Wales aerial bombing mission at ANZ Stadium in Sydney on Wednesday night.

Rookie coach Kevin Walters brought injured fullback Billy Slater into camp Maroon on the Gold Coast this week, specifically to help Boyd and his wingmen Oates and Dane Gagai ready for the Blues' kicking game, spearheaded by Adam Reynolds with support from James Maloney and the left foot of hooker Robbie Farah.

Having played with Oates at the Broncos, Boyd said he had a good understanding of the youngster and believed he would be a big asset in helping Queensland start its sets strongly.

"We've had Billy (Slater) in here for a few days and he's been great getting the back three to catch the balls on the full and working on our positioning to get our sets off to a good start," Boyd said.

"Reynolds is one of the better kickers in the competition and we will have to do a lot of video on him. Maloney is great and having Farah as a left-footer makes it tougher for us to guard both sides of the field."

The veteran of 23 Origins said he expected nerves to kick in playing at fullback, but said his confidence levels were high after playing for Australia in the No.1 jumper earlier this month.

"I think playing for Queensland in the Origin arena is going to be a tougher challenge, but I am really looking forward to it," he said.

Boyd said Oates had used the week to familiarise himself with how Greg Inglis played, and especially how he liked to defend.

"As a winger you have to mirror your inside guy," Boyd said.

"But it's pretty scary seeing those two big blokes out there. Hopefully we can get them some good ball."

Boyd dismissed concerns Oates might be overawed by the enormous occasion of playing his first Origin in Sydney in front of a crowd that will give it to him all night.

"Once he gets out there and feels the way the game is going and gets a touch I reckon he will go well and be a long-term Origin player."

Boyd meanwhile jumped to the defence of his lifelong NRL club coach Wayne Bennett, who was savaged this week by former Broncos captain Gorden Tallis for appointing Kiwi international Adam Blair as stand-in captain during the Origin period.

"I don't want to comment too much but everyone loves Blairy at the club. I love playing with him. He's a great bloke on and off the field," Boyd said.