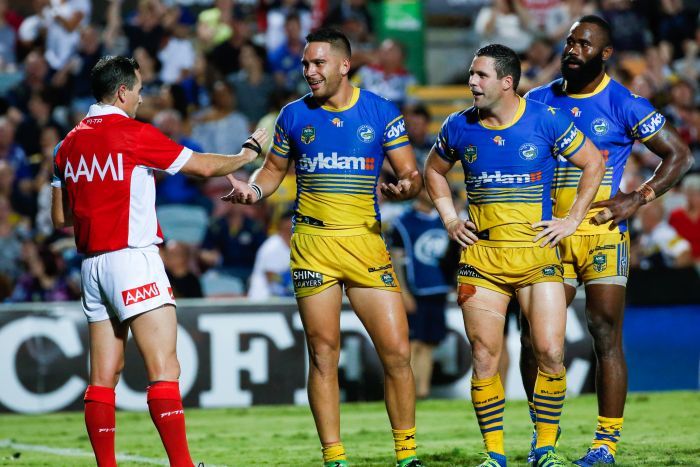 The NRL's chief executive Todd Greenberg has defended the punishment meted out to the Parramatta Eels over salary cap breaches, saying it would be 'soul destroying' for players and fans to not be able to play for competition points.

In a major blow for the Eels' finals hopes, who were in fifth place after round nine but now drop to zero, the NRL handed the club a breach notice on Tuesday morning, fining it $1 million and docking it 12 competition points.

The team will only begin accumulating competition points once it makes necessary changes to comply with the 2016 salary cap.

Of the $1 million fine, $250,000 will be suspended if the club accelerates recommended governance reforms by a set date.

The club will also be stripped of its Auckland Nines title won earlier this year.

The decision will inevitably be compared to when the Melbourne Storm were stripped of their 2007 and 2009 NRL titles for a massive cap breach and were not allowed to play for competition points in the 2010 season.

Greenberg said Parramatta's punishment was severe, even though they will be able to play for points this season should they fall beneath the cap again.

The Melbourne Storm could not play for competition points when its salary cap breach punishment was handed down.

"I think it is severe. Every time this club plays with a roster that is above the salary cap, they won't accrue points. As soon as they have a roster that mirrors their counterparts, they will play for points. That is a fair and just outcome," Greenberg told a media gathering.

"I didn't make the decision on the Melbourne Storm but I am making the decision today. The decision we have made gives some eye to the future and hope to the club.

"When I watched the Melbourne Storm fans and players have to continue to play a season without the ability to accrue points, I thought that was soul destroying for the players and fans.

"I have tried hard to find a way forward here that Parramatta Eels can take a step forward today."

Greenberg and NRL Integrity Unit head Nick Weeks addressed the players in person on Tuesday morning and the league boss said the group was understandably shattered.

"I feel sorry for the players," he said.

"This is a really difficult time. They have worked hard and played great footy but I have a duty, and the game has a duty to represent 16 clubs and 16 groups of fans and that is what we have done today."

Eels breached cap five times in the past six years

Greenberg said the Eels employed a number of strategies to circumnavigate the cap, including paying undisclosed remuneration to players, third party agreements for players in breach of the salary cap rules, and issuing fictitious invoices to raise money to be made available to players.

"They have breached the salary cap rules in five of the last six years," he said.

"As we sit here today, our preliminary findings suggest that the club is again over the salary cap for 2016. This has to stop. It stops today.

'A stain on our game' ... NRL chief executive Todd Greenberg.

"We have given the club numerous invitations to come forward and be up-front about its activities. But to this point, they have failed to do so.

"It is important that everyone understands we will not reach a final view on either conduct or the sanctions until the club and the officials have had a chance to respond."

Greenberg described the findings as a stain on the NRL, saying the club underwent a deliberate system to rort the cap.

"This is a tough day for the game. A truly heartbreaking day, particularly for Parramatta fans and their players. Sometimes the hardest thing to do is also the right thing to do," Greenberg said at a media gathering.

"Regrettably, the results at this stage are not only disappointing, they are a stain on our game. The preliminary findings suggest the operation of a deliberate, coordinated and sustained system of salary cap cheating by the club.

"Based on the information we currently have, we believe the system was conducted with the knowledge and support of the club's board and senior executive.

"In short, the preliminary findings point to the operation of a range of strategies since as early as 2013 to get around the salary cap, to give the club an advantage over its competitors."